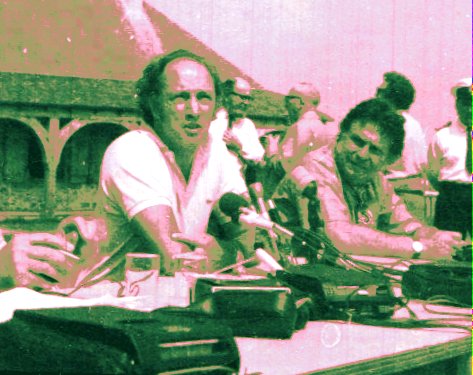 Did you notice all the excitement at the Seaport Market on Saturday when the Prime Minister dropped by? Twitter was flooded with images, some so cute that kittens stopped trending for a moment. This made me remember when Justin’s father and mother visited Fortress Louisbourg in August 1971. I had a summer job there as an archaeologist and the whole site was shut down for Pierre and Margaret. Project photographers were really responsible for recording the event, but some of us were issued cameras and instructed to stand around the edges and perhaps capture some local colour.

I saved a proof sheet of photos from the event (surprise, surprise). Here are some of my blurry memories of the day.

The Trudeaus were very relaxed and casual (here on the left). Pierre was wearing a yellow polo shirt and pressed jeans. The first of the reconstructed buildings opened this year but there was still lots of construction underway. Here Pierre mortars a stone on the top of the engineer’s house to the apparent amusement of his wife. They had just been married in March (to the country’s surprise and intense curiosity). Trudeau held a little press conference in front of the guard house with Allan J. MacEachen to the right. MacEachen was President of the Privy Council at the time and would have been helpful procuring resources for the huge Louisbourg project. Notice the reporters’ portable tape recorders. If you have ever been involved in this sort of event you’ll realize that most of the day was spent standing around, sometimes snapping photos of your colleagues. Depending on your point of view, some of you might suggest that our future prime minister was on this visit as well. Justin was born five months later on Christmas Day. Later the Trudeaus got on a Coast Guard vessel in Louisbourg Harbour and sailed to St Pierre for a visit.

I was about the same age as Margaret Trudeau. And what did I look like at this moment (you are asking yourselves)? A couple of weeks earlier my friends Chuck and Susan came to visit and Chuck took some swell pictures of us on a walk to the lighthouse in the fog. Notice our unironic bell-bottoms and my red tie-dye tee shirt I made at a tie-dye and beers event. Because it’s 1971.