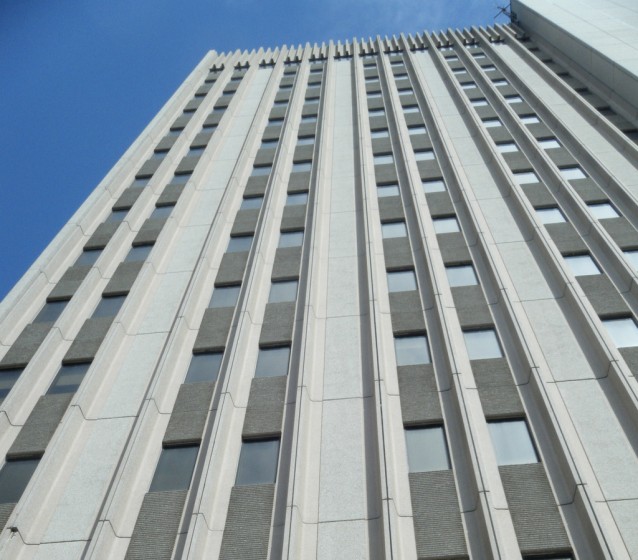 (This is the second in a series of blogs about mid-century concrete buildings on the Dalhousie University Campus).

With the sesquicentennial of Confederation coming up next year we will be hearing lots about the legacy of Centennial buildings. Nova Scotia’s signature project was a new medical building on the Dalhousie Campus named for Father of Confederation Sir Charles Tupper. The opening in 1967 was a big deal with the Queen Mother and Prime Minister Lester Pearson in attendance. At fifteen storeys it was the first TALL building in Halifax. For many decades I had not paid any attention to the Tupper. Then a few years ago I walked by on a bright spring morning and marvelled at the precision and elegance of the precast concrete panels that cover the tower. Notice the subtle variations in colour and texture and the crispness of the window openings. An equal joy was the colonnaded low pavilion that extends from the base of the tower. Isn’t that tiny arch gesture sweet? Last year the Jane’s Walk I led started at the Tupper Building, and many of the folks attending had never visited the plaza and were shocked at its beautiful proportions. They would immediately have voted it the best “Halifax public space hiding in plain sight for 50 years.” What a charming event venue it could be with the trees lit up and big projections onto the side of the tower. I think the plaza was built around a line of existing trees. On a side note I dream of a time when we can move beyond picnic benches and Adirondack chairs in sophisticated urban landscapes. Closer looks are rewarded: like this giant beehive of glazed breeze-block (netted so it will not become a pigeonhive). Or step inside and revel in 1960s details. My 1968 photo shows the space under the tower was originally open to the plaza. This framed the view and created a sense of compression that was released when you stepped down onto the bright plaza. It also produced a wind tunnel effect so powerful that doors to the tower could not be opened for fear the wind would rip them off their hinges. The space has been filled in. A view down Carlton Street a couple of weeks ago shows how the infill stops the eye. Maybe some day the walls can become more transparent and look less like giant garage doors. Do make the effort  to stop by and sit in the plaza and look at the building. I can think of no other major 50-year-old building in town that is so well preserved and has its associated landscape still intact. And amazingly the whole thing looks very similar to its pre-construction architectural rendering. Another building I used to think would make a wonderful home in the style of Ray and Charles Eames.

Near the Tupper plaza is the 1938 cornerstone for the medical library designed by S.P. Dumaresq, Phil’s father. That building was demolished to make way for the son’s skyscraper.