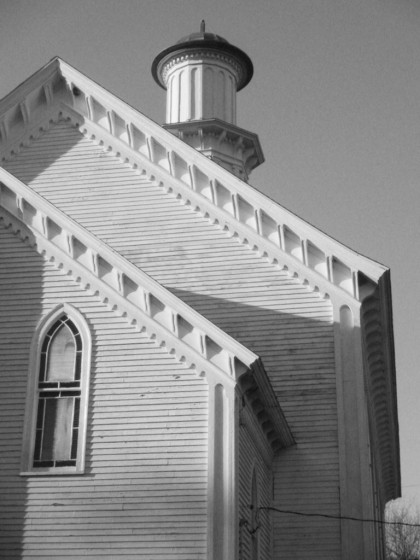 Do you know Bear River? In the past it has always been on “prettiest village in Nova Scotia” lists. Recently it was in the news because of a sad squabble, the kind that stands out in a small community where everyone knows each other.

Made me remember some photos I took on a bright November afternoon a couple of years ago. Maybe they will help you understand why folks are passionate about Bear River. The village is at the head of navigation on Bear River, and in the 19th century it prospered from sawmills and shipbuilding. The wooden architecture of that time is what attracted me to ramble for a hour or so. A pleasure of walking  are little discoveries like these special paired windows that showed up on a number of houses.

One of the most photographed buildings in town is this weathered gable end. I don’t know its story; shop, hall? The village spreads up steep slopes on either side of the river. It used to be branded “the Switzerland of Nova Scotia.” That confused me as a child. Actually it still confuses me.

Much of the little business district is built over the river with some of the shops supported by crib work made of slabs of granite. I’ve noticed this technique in Maine but do not recall seeing it elsewhere in Nova Scotia. In the 1960s and 70s Bear River attracted residents from away, many of whom were craft producers. There were craft shops and what we knew as health food, and later an innovative sewage treatment plant. The building I was most interested in examining was the United Baptist Church halfway up the hill on the west side. It has been beautifully maintained/restored. I walked around and around the building, marvelling at the dome-topped tower. Because of slope you can be level with the tower on the upper side and dwarfed by it on the downhill side. In Nova Scotia this is destination architecture.

The little Anglican Church on the other side of the gorge is also beautiful; a simple gothic design. Every summer for over 120 years Bear River has a Cherry Festival. Some year we should check it out.