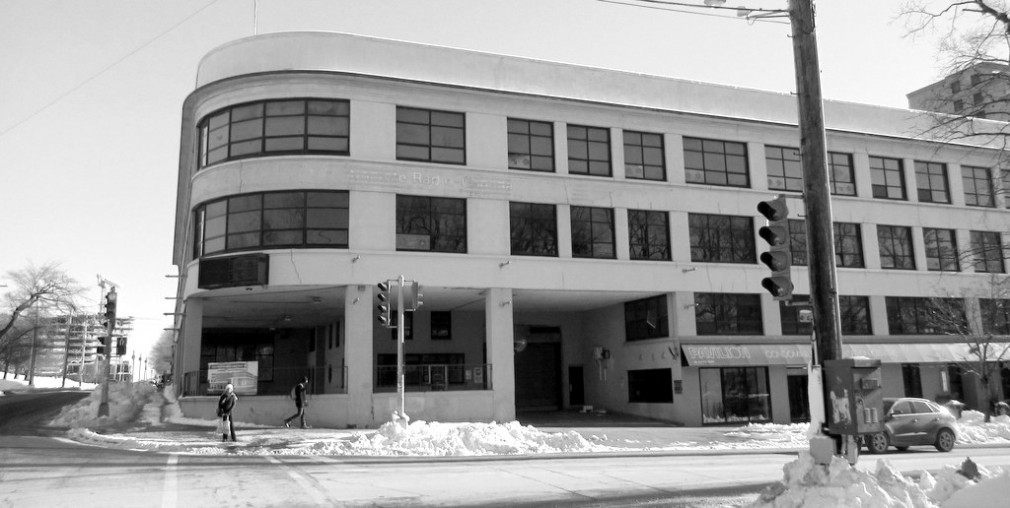 The Pavilion project proposed for the corner of Sackville and South Park has just advanced in the approval process, and demolition of the old CBC building  (on the site now) may start in February. On Friday I had a little time to kill while Sheila got a haircut and before a free lunch, so I went to take a farewell look at the old building. That streamlined corner has felt perfect for the site and despite being over 80 years old still feels contemporary. Really looking at the building I realized I have never appreciated the beautiful detailing of the entrance bay. . . or the changing rhythm of the windows. The building opened in 1933 and was the headquarters of the United Service Corp  that owned gas stations and car dealerships and bus companies in the region.  Prominent local architect Sydney Dumaresq designed the building, which housed a service station, car dealership (with parking for 40 cars on the roof), as well as offices.  In the 60s the Chevrolet and Oldsmobile dealership was still there with big shiny cars in the Sackville Street showroom.

The  legacy of the United Service Corp lives on in the philanthropy of the Fountain families who have supported so many local projects. Fred and David Fountain are grandsons of Fred Manning, the founder of United Service.

The only older photo of the building I could locate was this moody 1940s shot from the Archives collection.  The neon signs create a noir-ish feel (the CBC rented space beginning in 1944  and eventually purchased the building). I took a dreary snapshot along Sackville Street in 1966.  It is looking west from the Irving gas station that was at the corner of Dresden Row. In the distance you can just make out the CBC and Chevrolet signs that were in the previous photo. There were lots of car dealerships and car services in the area before they moved out to Robie Street and along Kempt Road. Another little detail you should look for is this door and window in the corner drive-through  (where gas pumps were originally located). The steps lead to a blocked  entrance to the car showroom. The new building design pays curvy corner homage to the older building, a reason you should take a moment to stare before the demolition so you will have clear memories to tell your bored grand children in the future.  Also, with  the CBC logos and banners stripped away the old building  has never looked better.