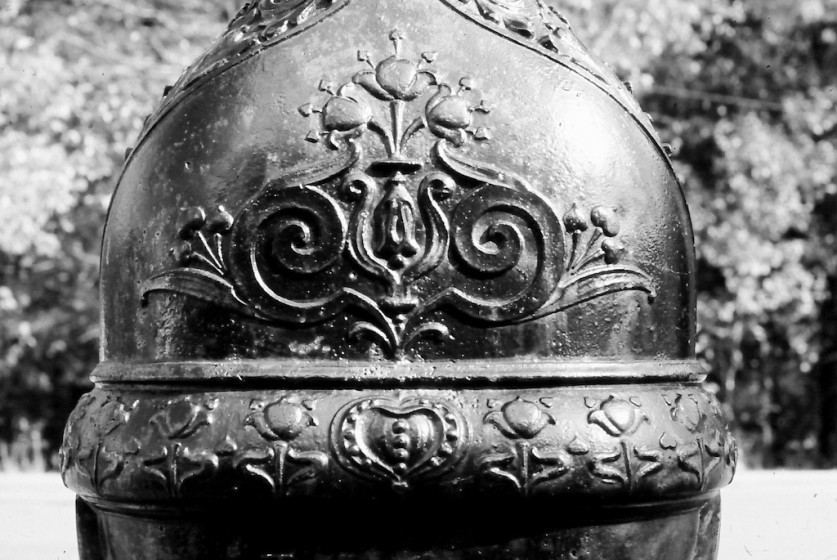 This is the last of a four part series on ironwork in Halifax that was made by the Walter Macfarlane Company in Glasgow Scotland. All the others pieces I’ve shown are well known, like the gates to the Public Garden, but I suspect you may never have stopped to appreciate the five lamp posts near the Lodge at the South Park Street entrance to Point Pleasant Park. The  ornate, art nouveau-style bases are helpfully marked and dated “Glasgow Corporation Lighting Department 1900”  with a Macfarlane mark on the back.  Below is an older photo, they are now beautifully restored. Glasgow street lights, that’s a little strange don’t you think?  Gets stranger. They were presented to the city by General K.C. Appleyard, a British industrialist. In the 1960s he was associated with Industrial Estates, established to attract businesses to Nova Scotia. Over lunch at the Halifax Club he apparently brought together the guys who formed Halifax Developments to create Scotia Square! I wonder if  the cast iron Glasgow light standards give some insight into General Appleyard’s character (sort of like Rosebud the sled).

The lamp poles were erected first at the Tower Road entrance to the Park in 1967 and for decades appeared to get little attention from the public or the city. At one point their original hanging lamps were replaced with a particularly ugly and inappropriate fixture. But, now restored, they  are happy companions to the fanciful Lodge;  part of a miniature Victorian district of the Park. Today I did an internet search and found a historic photo of one of our lamp designs in front of a Glasgow pub. Neat to see an original context and light fixture. Wonder if there would be any singing under the lamp at closing time or just fights.