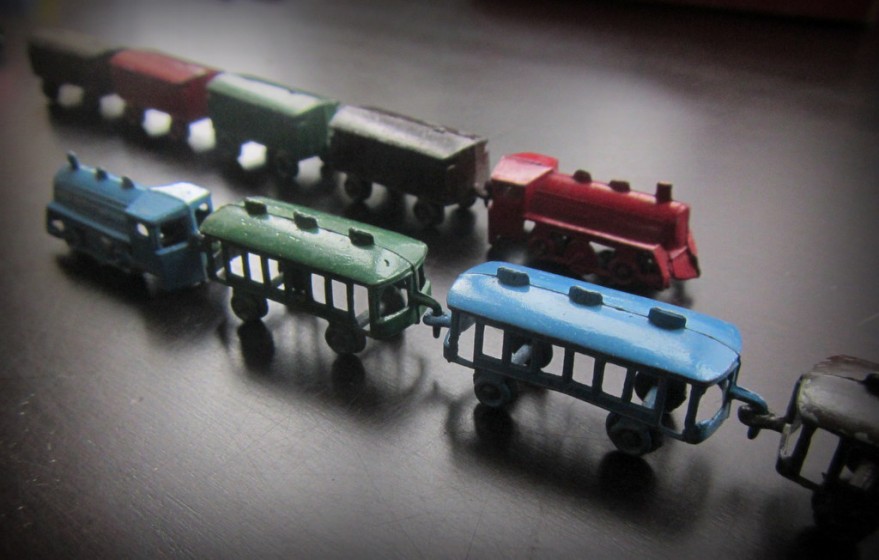 For many folks Christmas is a time of nostalgia, when old decorations and old memories are unpacked and appreciated for a moment. Because the season is particularly associated with children and toys it made me remember a “time capsule” of little toys, most of which are over 60 years old.

The cache actually doesn’t have anything to do with Christmas but was our family “sick box.” When a child was ill in bed this quite nice, old wooden box would materialize. Open it up and discover a treasure trove of little playthings selected to distract a fevered child. Items have been added and subtracted but there is a core collection I remember from the early 1950s. These tiny tin trains, for example, chugged through many mountain passes of bed spread. A strong military kept us safe. Remember that WW2 had just ended seven or eight years before. Perhaps the best toys were the bits and pieces that made a little eastern European village;  endless adventures in town planning. Even the label for this set sort of survives. A German block puzzle had six pictures most of which looked weird even then. I remember these  plastic creatures could walk down inclines but the mouse finger puppet must have snuck into the box after my youth. These Vari-Vue “flickers” came in cereal or something like that. The horse could buck endlessly. Did you grow up with a sick box? I have no idea if they are common or how my mother got the idea. (Somewhere like the Ladies’ Home Journal?) Today do you just give the ailing kid your phone or an iPad?

We knew what being sick in bed was supposed to look like because of Robert Louis Stevenson’s 1880s poem “Land of Counterpane.” Here is an illustration and the poem in case you’ve forgotten (like I had). When I was sick and lay a-bed,
I had two pillows at my head,
And all my toys beside me lay,
To keep me happy all the day.

And sometimes for an hour or so
I watched my leaden soldiers go,
With different uniforms and drills,
Among the bed-clothes, through the hills;

And sometimes sent my ships in fleets
All up and down among the sheets;
Or brought my trees and houses out,
And planted cities all about.

I was the giant great and still
That sits upon the pillow-hill,
And sees before him, dale and plain,
The pleasant land of counterpane.