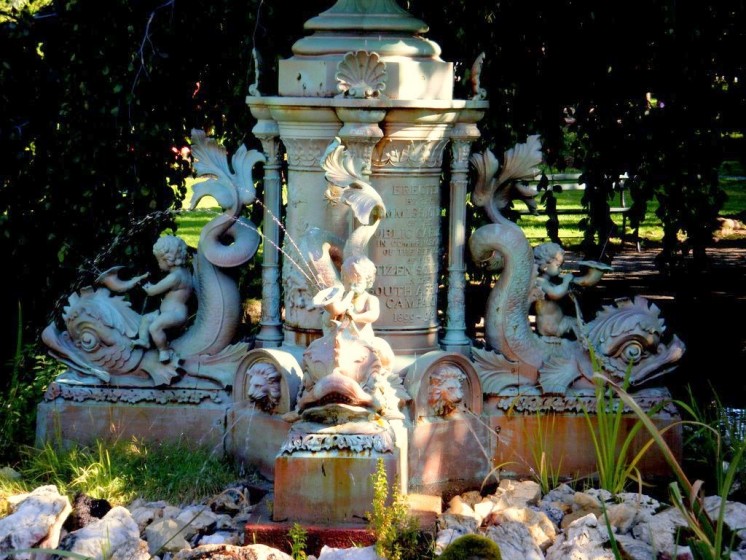 This is the third blog about products from the Walter Macfarlane ironworks in Glasgow Scotland  that found their way to Halifax around the end of the eighteen hundreds. Are you ready for a fantastically wacky fountain masquerading as a war memorial? From a distance the 1903 fountain looks suitably restrained, topped with a figure representing the “citizen soldiers” who fought in the Boer War, 1899 – 1902. Get closer and you realize there is a lot of strangeness happening on the lower levels. Babies blowing horns and riding dolphins. A long-eared squirrel nibbling an acorn. Another youngster with a bell flower hat sailing in a boat made of a big leaf. These figures, of course, have no connection with the incredibly cruel war fought in South Africa. That’s because Macfarlane had been selling the bottom part of the fountain for about 15 years before the idea of a war memorial came up. Here it is in an 1886 catalog with a nymph on top, suitable for a Victorian park anywhere in the Empire. It appears that the Gardens Committee selected the fountain base and then sent photos to Macfarlane of a soldier in the pose they wanted sculpted. The model is said to be Billy Pickering, the most talented Nova Scotian athlete of his day. Billy Pickering made his way into the Macfarlane catalog along with a more aggressive soldier.  Or you could order Robbie  Burns or choose from any number of allegorical figures as fountain toppers. Remember these figures and the rest of the fountain are cast iron. The bronze colour is just paint. The fountain has foundry marks in several places. Exciting to discover in the early 1970s when details of the fountain’s origins had been forgotten. So take the time to wander over for a closer look. I’m sure you’ll be enchanted too.