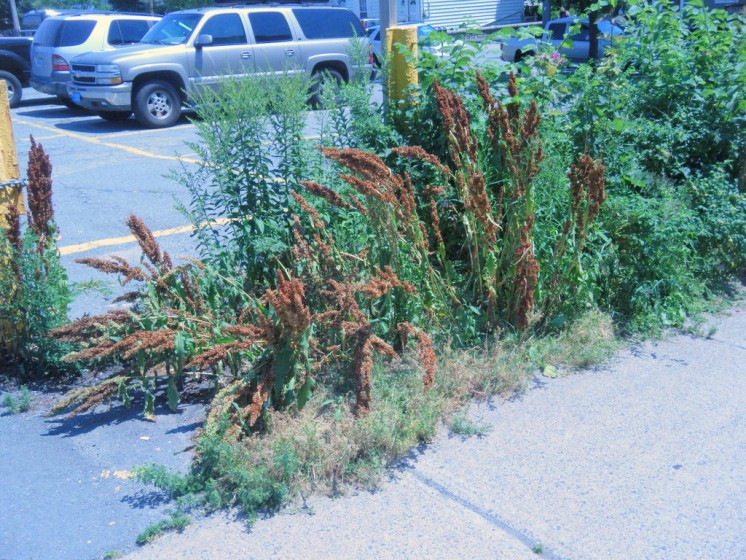 Did you notice that construction is going to begin soon on the Margaretta block (Clyde Street between Dresden and Birmingham)?  I’ll be glad to see this shiny new building because it eliminates something that has irritated me for a while – the parking lot that occupies that space at present. I don’t recall when the three blocks along the north side of Clyde St. were demolished, I guess in the 60s. Here is a charming photo I took in the western-most parking lot in the early 70s with the liquor store and the new Fenwick Tower. At the same time I took this shot in the lot where the Margaretta will be built, looking at the blank wall of the Heidelberg Restaurant (now wedding dresses). These photos suggest that the area has been dreary for 40-plus years. I started taking notice of the Dresden Row parking lot again in the spring of 2012. This was the first of the Open City events that encouraged us to appreciate downtown businesses, and for years Spring Garden Road had declared itself the premier shopping street in town.  When I took a closer look at the district’s major parking lot it was dismaying.  Rusting signage that had been painted out. What was once a rose hedge totally overwhelmed by garbage and weeds. (Nice mural  on Winchester’s). The ticket booth was surrounded by more weeds and garbage. When you visit new cities the advice is:  be aware of your surroundings. I was shocked to  realize, if I came upon this decay in a strange city my alarm bells would go off. I would feel uneasy. Because I was in Halifax I knew there was nothing to be frightened of,  all I was seeing was disrespect.

In 2011 developers had bought the site and continued to operate the parking lot after a fashion. In 2013 the “hedge” was   trimmed  which showed that with not much effort the site could be spruced up. But  maintenance needs to be regular and frequent and later in the summer the weeds had reappeared and the garbage accumulated. The  perennial rat trap confirmed we were in a wildlife preserve. In the last two years not much has changed, and although I would snap the occasional photo of the mess I gave up tweeting them long ago. Who cares.

What did I learn? That whoever owns this lot must not respect their community and probably don’t deserve our respect. And that the merchants group must be so dispirited that they gave up trying to have their area feel safe.

When construction starts in January I’ll have one less thing to be irritated about and can focus my small reserve of scorn on the Mumford Road Bus Terminal. Imagine if the developers had channelled the house of folk artist Maud Lewis. Hipsters  walking in the drawing don’t have to worry about tripping over concrete edgers that got rearranged  by the snow plows but left in disarray.