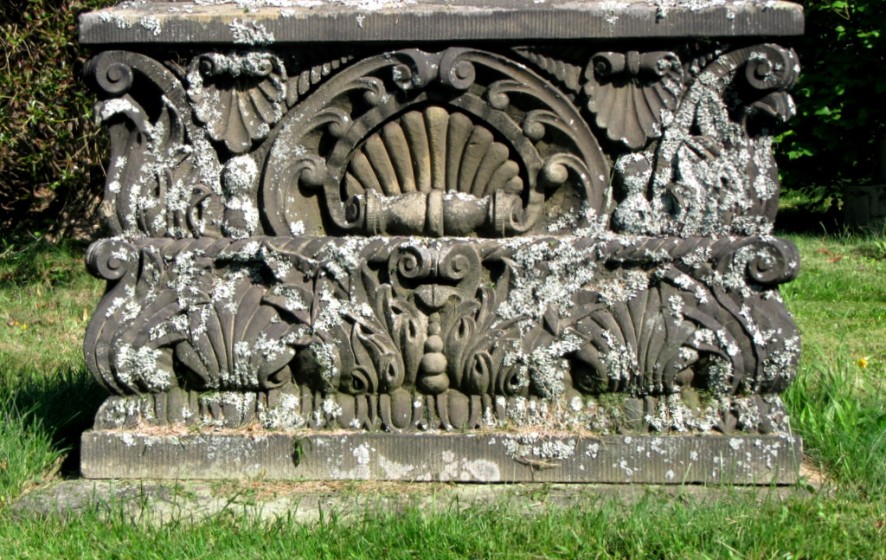 Have you been invited to a cottage this summer?  I hope so . We spent a couple of pleasant days in the heart of cottage country on Caribou Island in Pictou County. The occasion was a meet up of some classmates of  Sheila’s from her days at Mount A in the mid 60s.

Everyone enjoyed the special charms of the Northumberland  Strait, like walking on shallow sand bars and watching the clouds,  with some dogs to keep things lively.

Cottages can become a little like time capsules. I noticed some familiar packaging on the spice rack that probably has been around for a while. The nutmeg, in the pre-metric packaging, might date to the late 70s. Another treat was a feed of snow crab. Local crab needs to be more celebrated (which means I need to eat more). You can only do so much walking-on-the -beach-with-dogs so Sheila and I ventured off the island to do a little exploring in the county. A destination we looked forward to visiting was the temporary exhibition about aprons at the Museum of Industry: dozens and dozens of domestic aprons from a private collection and workers and ceremonial aprons from museum collections.  Here are some vintage apron fabrics that attracted my attention. Also a chance to see old museum favourites like the first Volvo assembled in Nova Scotia. Back in the day, those early Volvos looked pretty clunky but somehow the Canadian gets more stylish with age. We walked up and down the old commercial  street of New Glasgow which has all the interesting building details that you would expect to find in one of our premier industrial towns . At the end of the street we ate great noodles in hip modern surroundings at Mamatsu. Out in the countryside we happened upon more modern, the Health Centre for the Pictou Landing First Nation.  The innovative building was designed by Richard Kroeker, who teaches at the Dalhousie School of Architecture. Destination architecture for sure. In the clear, late August light some examples of iconic architecture were looking their best; a tipi in front of the Health Centre, the ruin of  the Cornish Engine House at the Museum of Industry and the almost Salinist, concrete lighthouse on Caribou Island.

Probably our most fun discoveries were in a couple of cemeteries in Pictou and New Glasgow. The Haliburton Cemetery just outside Pictou was filled with hydrangeas in bloom and had a jaunty sign.. A couple of special markers from the 1880s  immediately attracted our attention. One monument topped with an angel was hand carved from local sandstone in New Glasgow. The other was mass produced of cast zinc in Connecticut . The figure represents Faith holding a Bible but both of her arms have gone missing. Pictou County has a proud Scottish heritage  so it was nice to see thistles on a number of monuments. A little book of Nova Scotia thistle photos would be very pretty. You’re welcome. This is a very unusual ironclad stone. Deborah Trask, who wrote the book on Nova Scotia gravestones, tells me this was carved by Charles Sobey, an uncle of Frank, builder of the grocery store empire. And finally, in the New Glasgow cemetery there are many sandstone obelisks topped with urns, all slightly different.  Here is a selection. A couple of weeks ago  Beth Dunham , a professional photographer and stylist, posted a photo on Twitter of a angel she had made out of beach finds. I remembered this as we were leaving the beach on Caribou Island and quickly arranged some stones and seaweed and a couple of bait bags into a sand-witch.

A few days ago Beth sent me an image of how a real stylist makes a sand-witch! She wins.