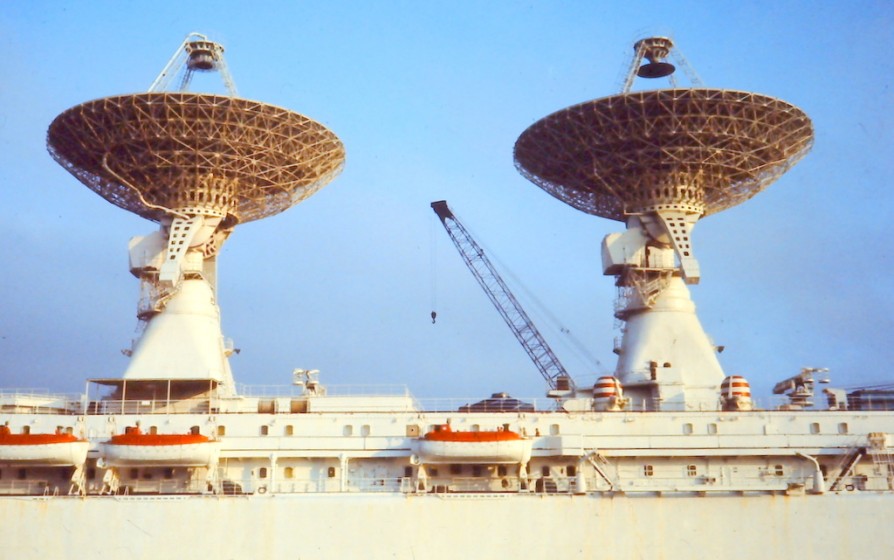 I’m a fan of #FontSunday on Twitter sponsored by the Design Museum in London. This week the topic was space-themed typography to coincide with a new Cosmonauts Exhibition  at the Science Museum, also in London. Made me remember a very special Russian vessel, Kosmonaut Yuri Gagarin, that occasionally visited Halifax in the 1970s and 80s.

We lived near the bottom of Inglis Street and one evening in 1982 we walked quickly through the tunnel under the railway tracks (known to us as “the pee place”). When we emerged on the harbour side there were folks fishing with the huge parabolic ‘dish’ antennas of the Russian vessel visible in the distance. In the press Gagaran was described as a satelite tracking vessel, which was probably accurate. We liked the idea that it was a spy ship listening to every conversation on the east coast of North America (which might also have been accurate). We all  knew that Yuri Gagarin was the first person in space on April 12 1961, beating American Alan Shepard by less than a month. Those had been disconcerting times as the Russians consistently won the space races. There was much hand wringing and threats to make us children learn more math, whether we liked it or not.

The first living creature in space was Laika, the space dog, in Sputnik 2, November 1957. When we realized that there was never any intention or method of retrieving Laika we learned something about the character of Russian resolve. Poor Laika. There was great light on the vessel that evening and as we gazed one of the harbour pilot boats pulled in to the basin to take a closer look. In the 70s we were accustomed to seeing Russian sailors, off of big fishing trawlers, walking the streets of Halifax. They always traveled in groups  and a frequent destination was the Woolco in Scotia Square. They would return to their vessels laden with bags of whatever might be in short supply back home. I remember seeing a group of Russians each with an armload of umbrellas. If you have never visited Thinkers Lodge, put it on your list. Take a selfie with the Nobel Peace Prize medal.