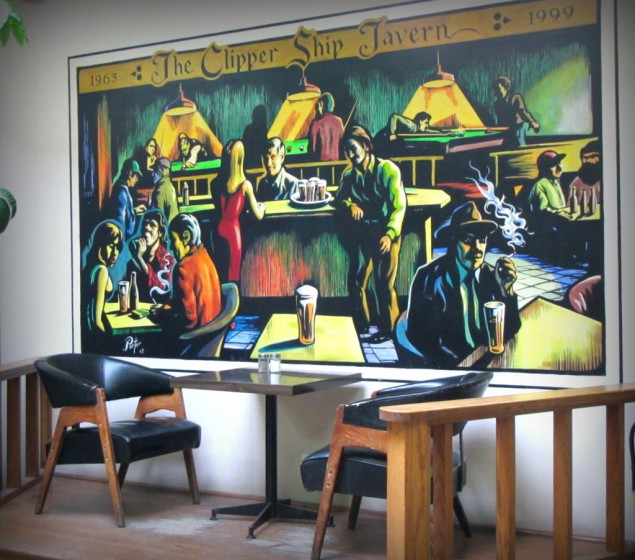 Last weekend we were in Yarmouth. On the last few visits we’ve walked the Collins Heritage Conservation District to marvel at the big Victorian homes so this time it was interesting to take note of more modern architecture. Yarmouth is a special place and if you have never spent any time there you should make an effort.

The reason for being in Yarmouth was to attend a garden conference that was based at the Grand Hotel on Main Street so we were at the centre of town.

The present Grand replaced an old Grand Hotel in the late 60s. The building has never been what you’d call charming. The windows have been reworked over time and that changed the original intent but the building is still more interesting than most of the hotels built today on the edges of our industrial parks. 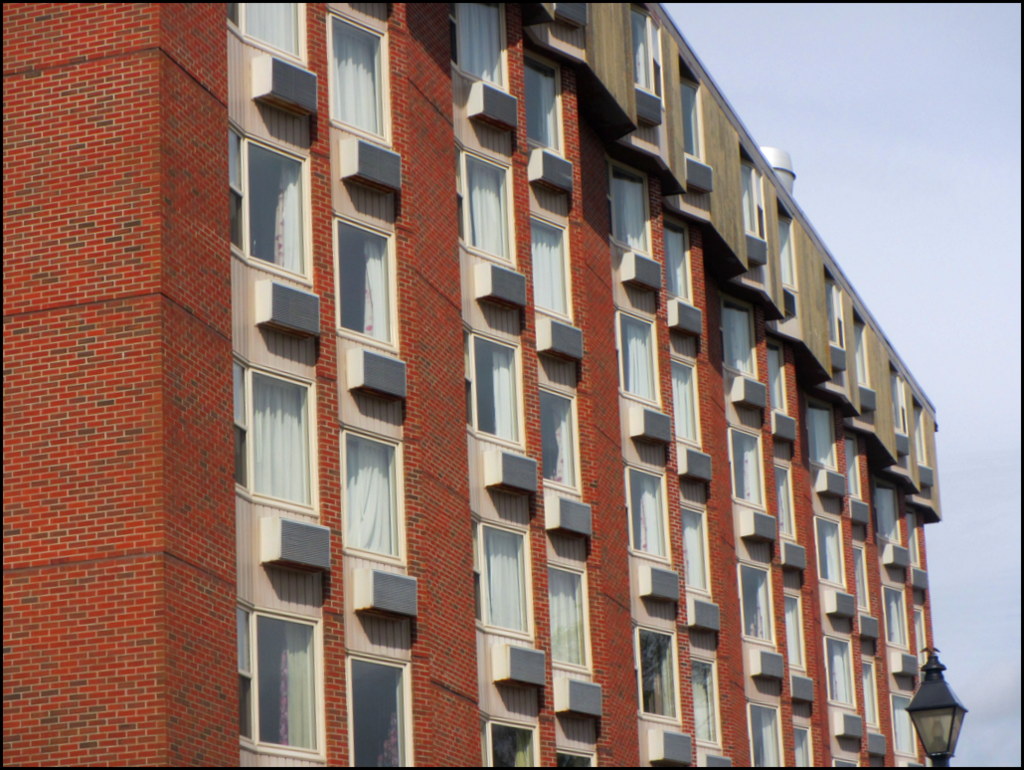 What really is nice is the town hall across the street. It was designed by Anwyll Fogo, architects in Halifax,  and opened in 1993. The building strikes a  balance between referencing the past and being contemporary ( twenty years ago).  I think it is aging well. 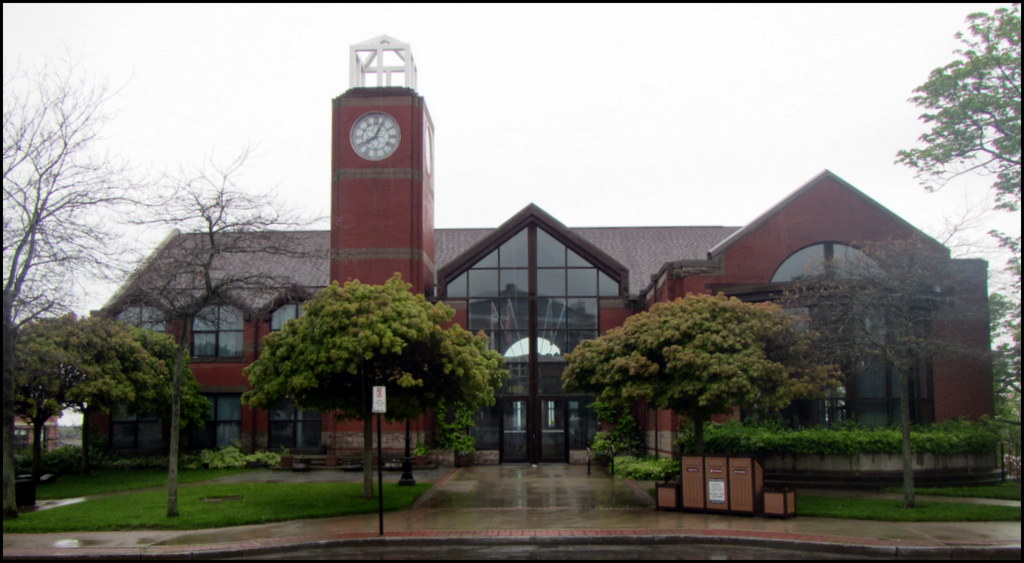 The back of the building faces the harbour and must have great views. 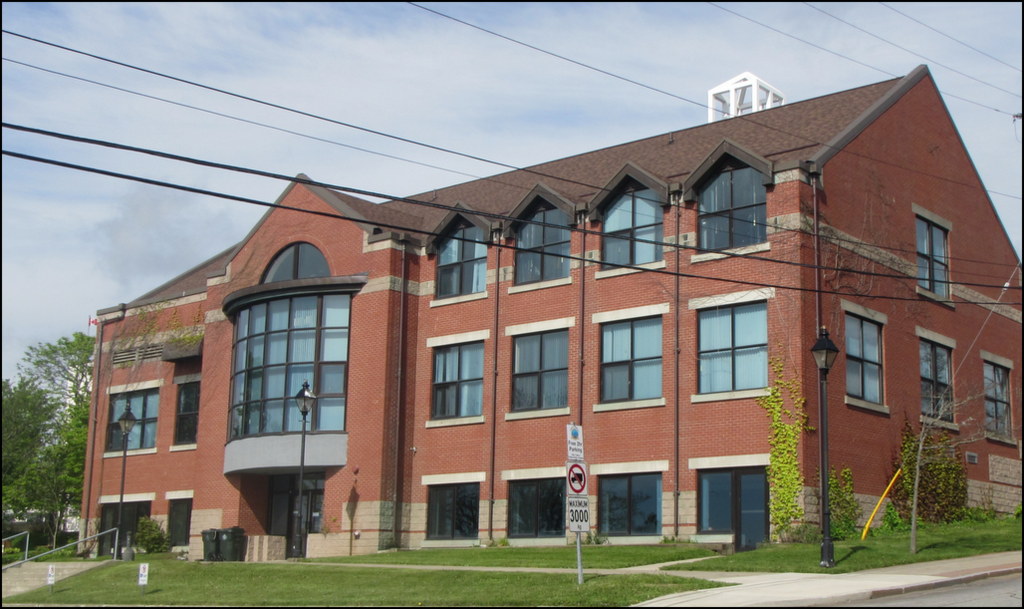 There are thoughtful details, like these seating cubes at the front of the town hall, and the landscape is really well maintained. 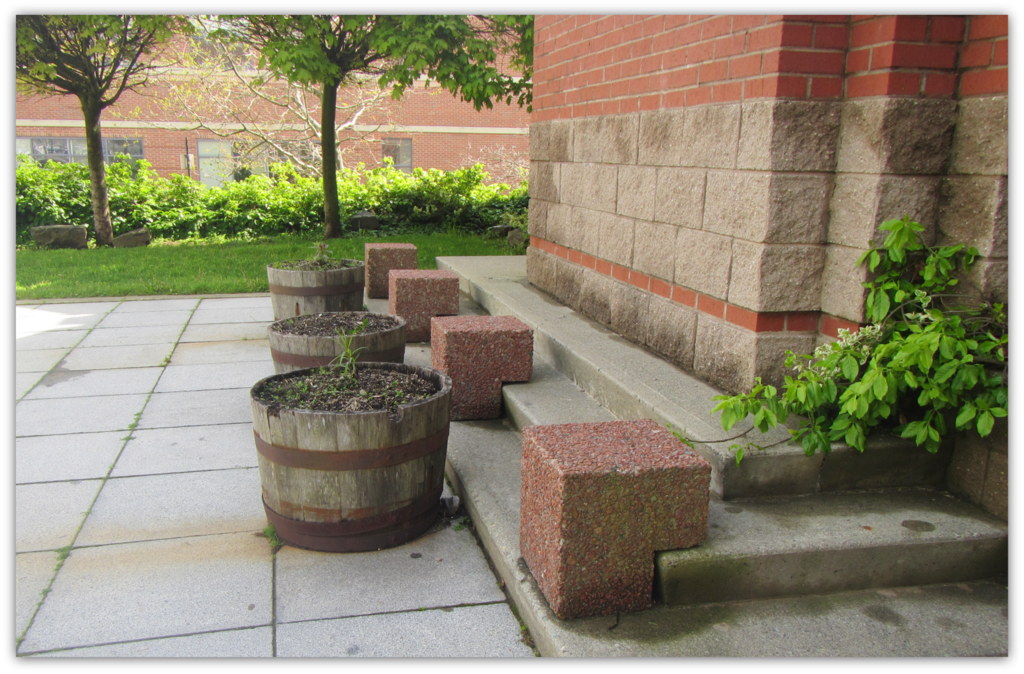 Next to the hotel is another good quality civic building,  the Izaak Walton Killam Memorial Library, designed by the Dumaresq office and opened in 1963.

The sprawling one story building is partially concealed by a mature landscape.  A neat detail is the bowed stone facade that directs you to the entrance. It conceals a tiny garden space. 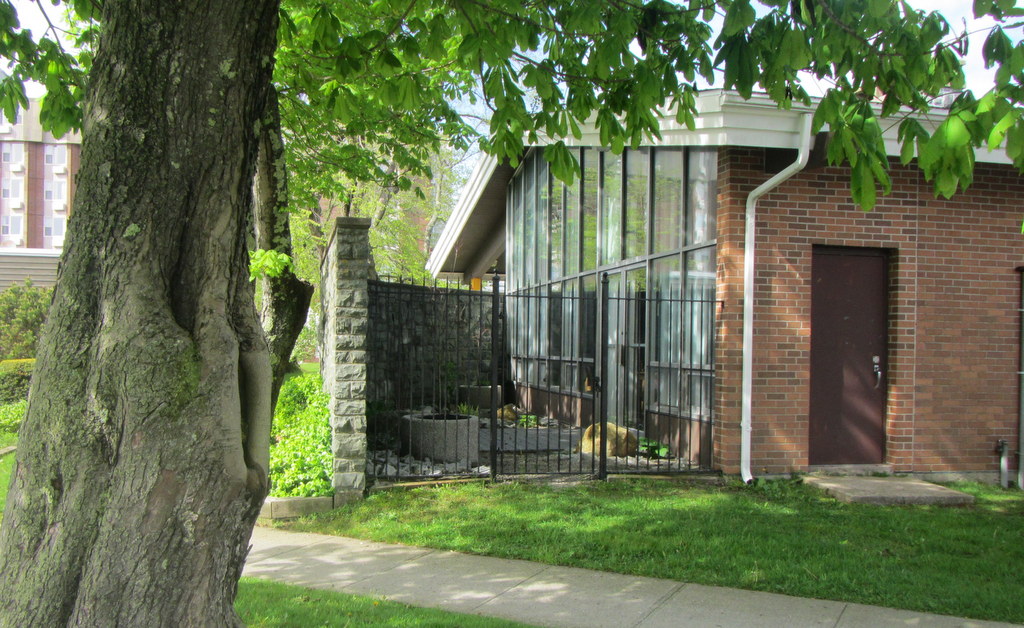 The library is set back from the street because the WWI memorial occupies the prime location.  This is a striking bronze sculpture created by Henri Hebert in 1923. Hebert’s father designed the Evangeline statue at Grand Pre and Henri produced the full-sized version. 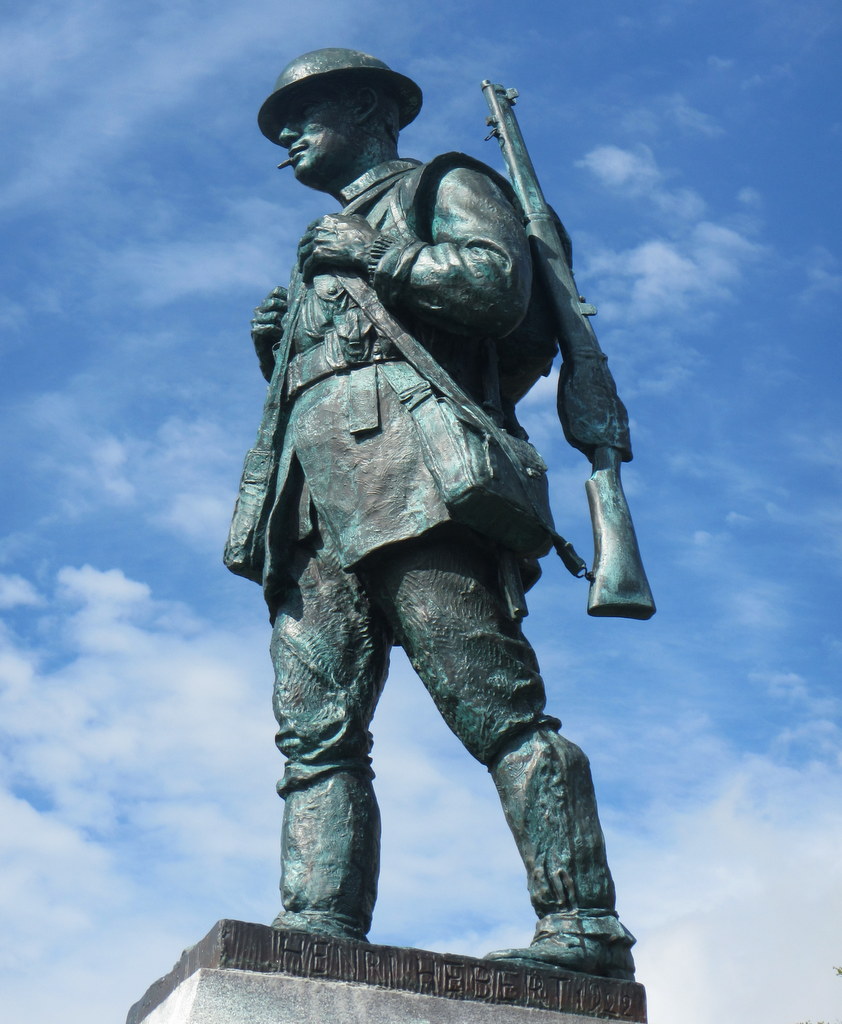 This may be the only Canadian war memorial accurately depicting a soldier smoking. (The Mother Canada statue would look better with a smoke. A smoke and a horse).

The steps and walk to the memorial are made of cut granite. Some of the stones in the walkway must be 10 feet long. This is a small example of the quality details that can be discovered throughout Yarmouth. 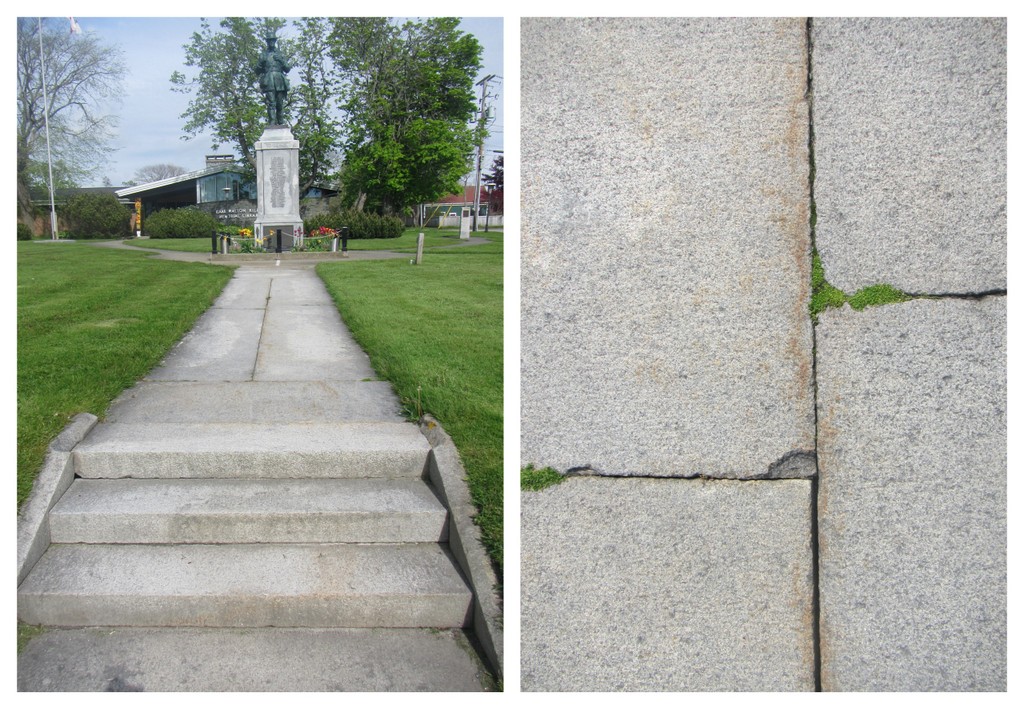 Next along the street is the old Court House that I gather is empty . 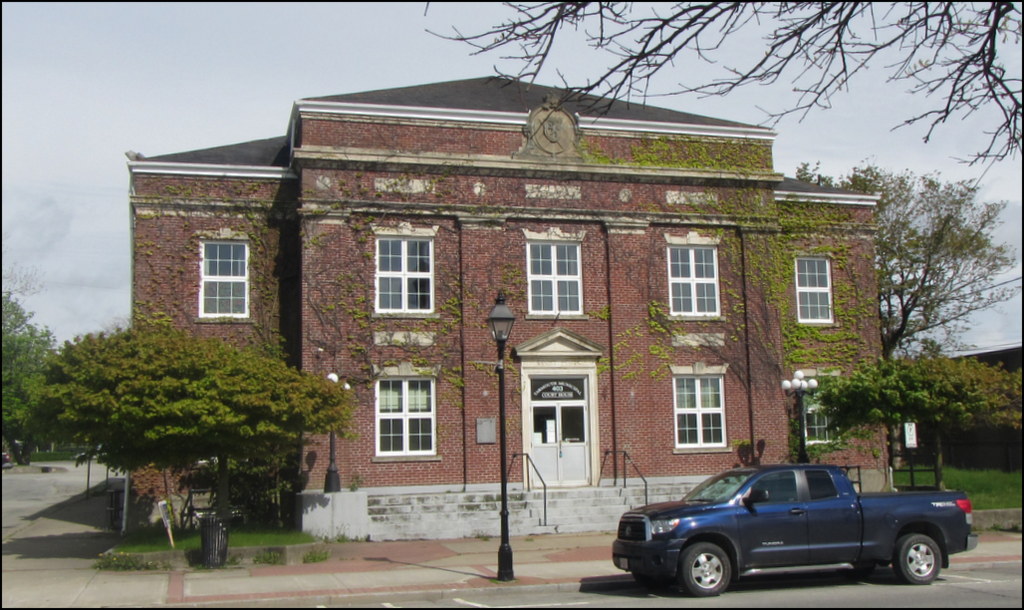 The newish Justice Centre up the street maybe has too many ideas for one facade.

Main Street has all the banks that you’d expect in a major community, representing various architectural  styles of the last 40 years. Here are examples of precast concrete and glass curtain wall. 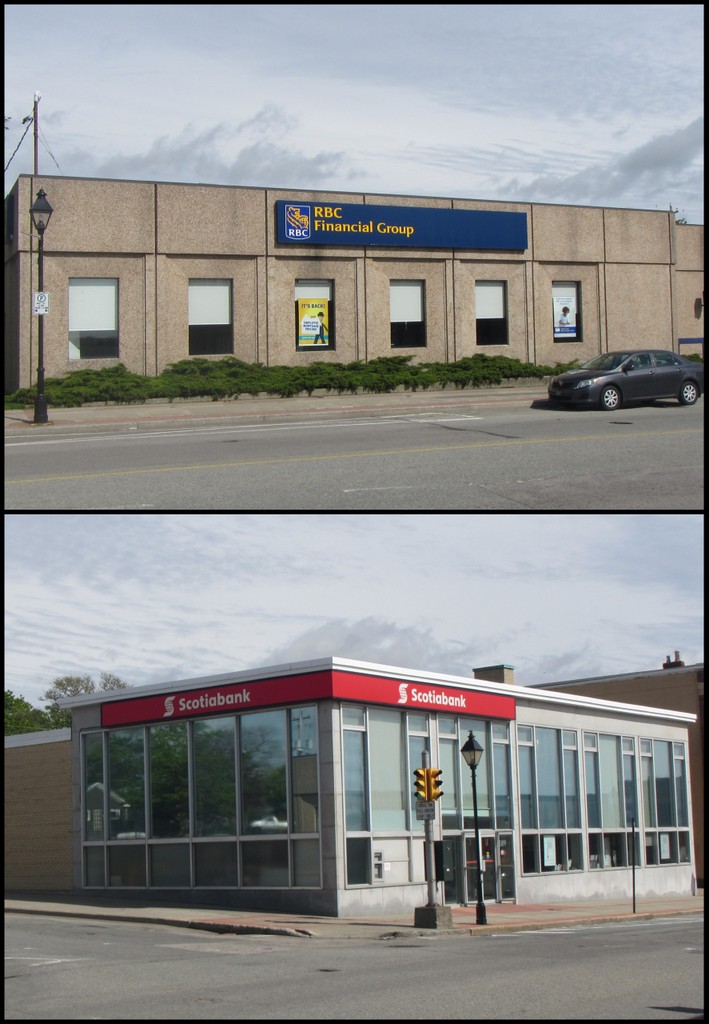 An example of a bank building of a previous era is preserved as the Western Branch of the Art Gallery of Nova Scotia. 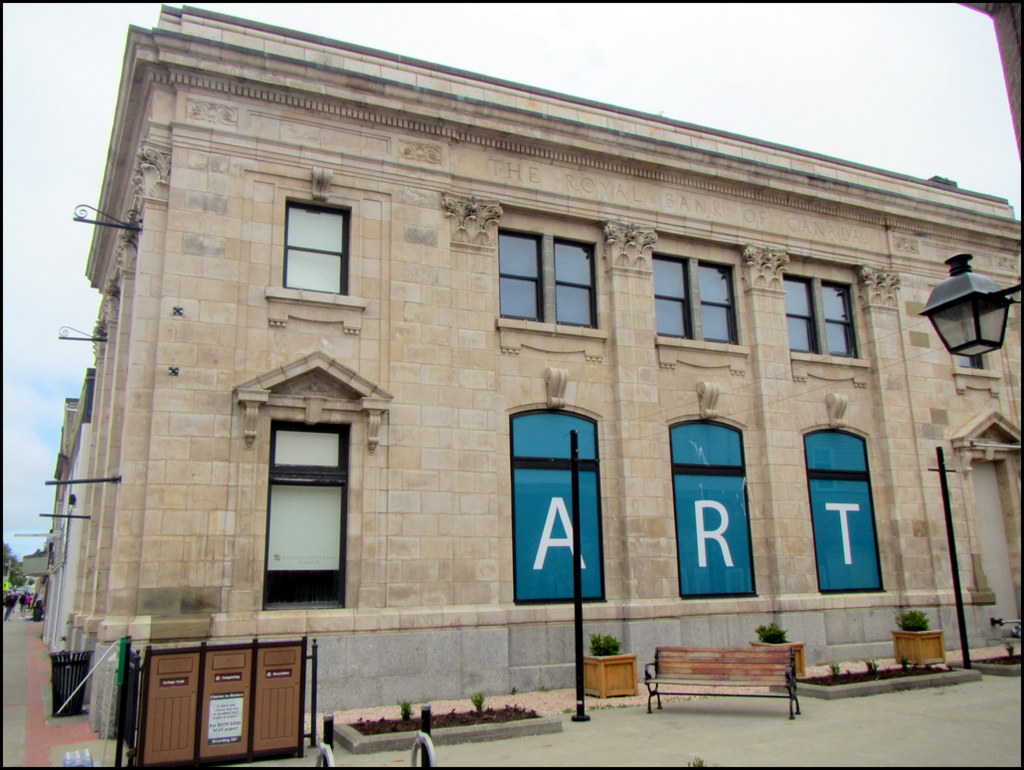 The side street beside the gallery has been turned into a pedestrian mall that was filled with children doing art projects when we first arrived. The massive 19th century brick building across the street  is a strong presence. 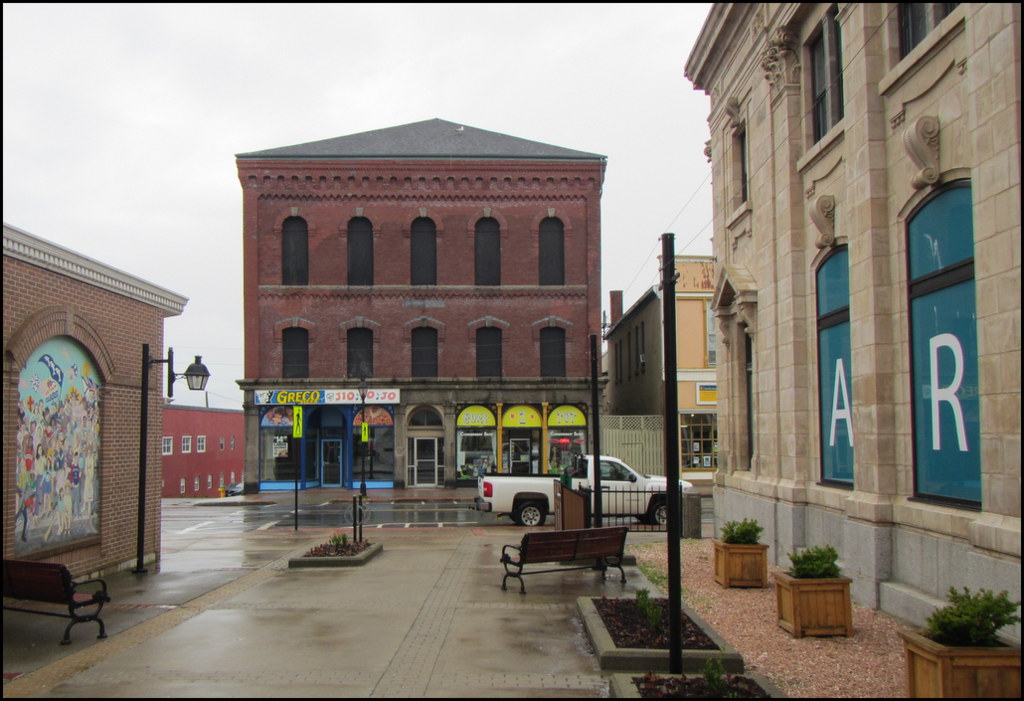 The streetscape is made more lively with some novelty architecture:  a Chinese restaurant and a whimsical optometrist. 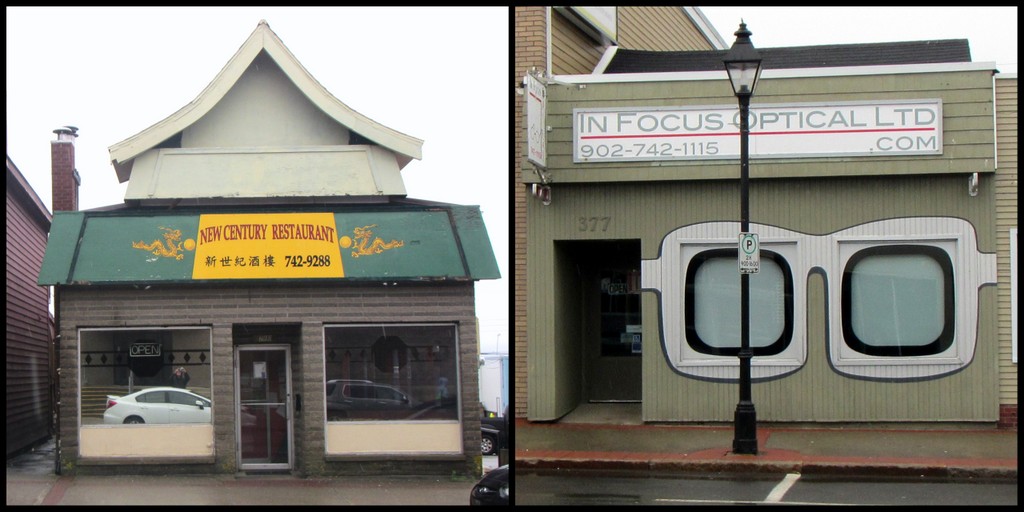 Continuing on the funky theme we were pleased to discover the Old World Bakery and Deli down near the ferry wharf.  We had a lunch and a breakfast there: perfect. In winter when the wood stove is fired up it must get positively cozy. 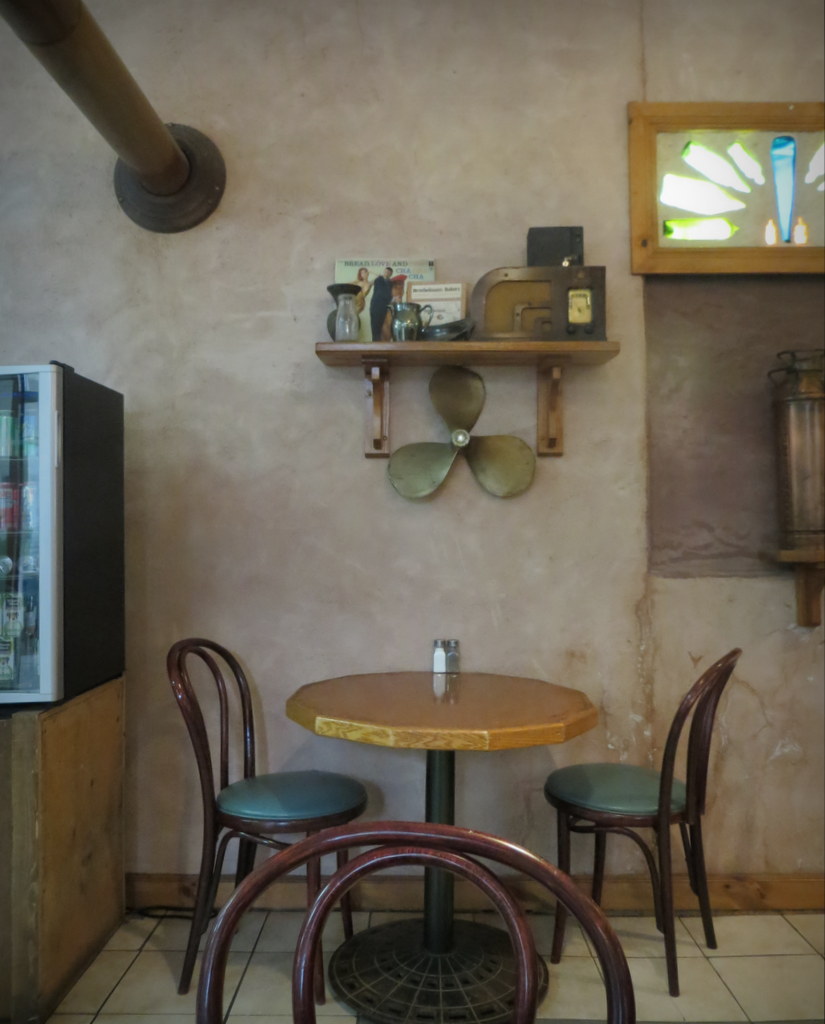 On our first visit to the bakery I didn’t pay any attention to a large mural.  But at breakfast I took a closer look.  It was painted by Brian Porter, a Yarmouth artist. I have always liked his work and just last week had made a special trip to see his show at the Secord Gallery on Quinpool Road.  The mural is designed to borrow space from the cafe so I had to have my picture taken in conversation with buddy. 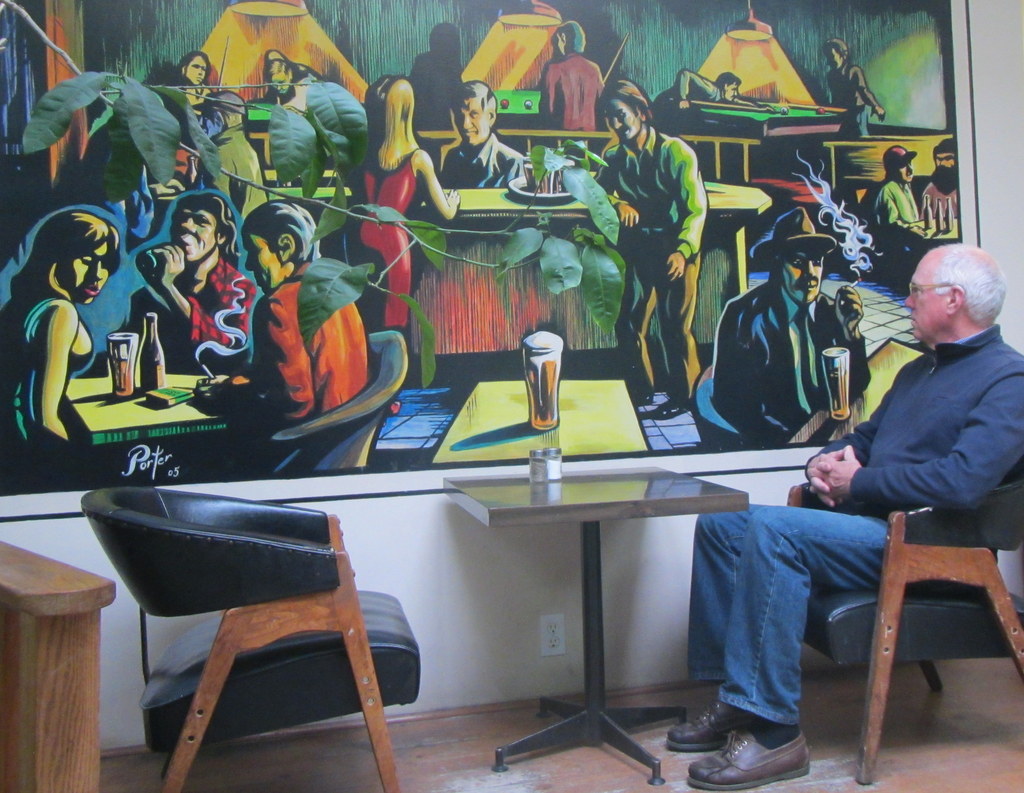 At the Library I noticed the columns at the entrance had also been painted by Porter.  More great, quality details. 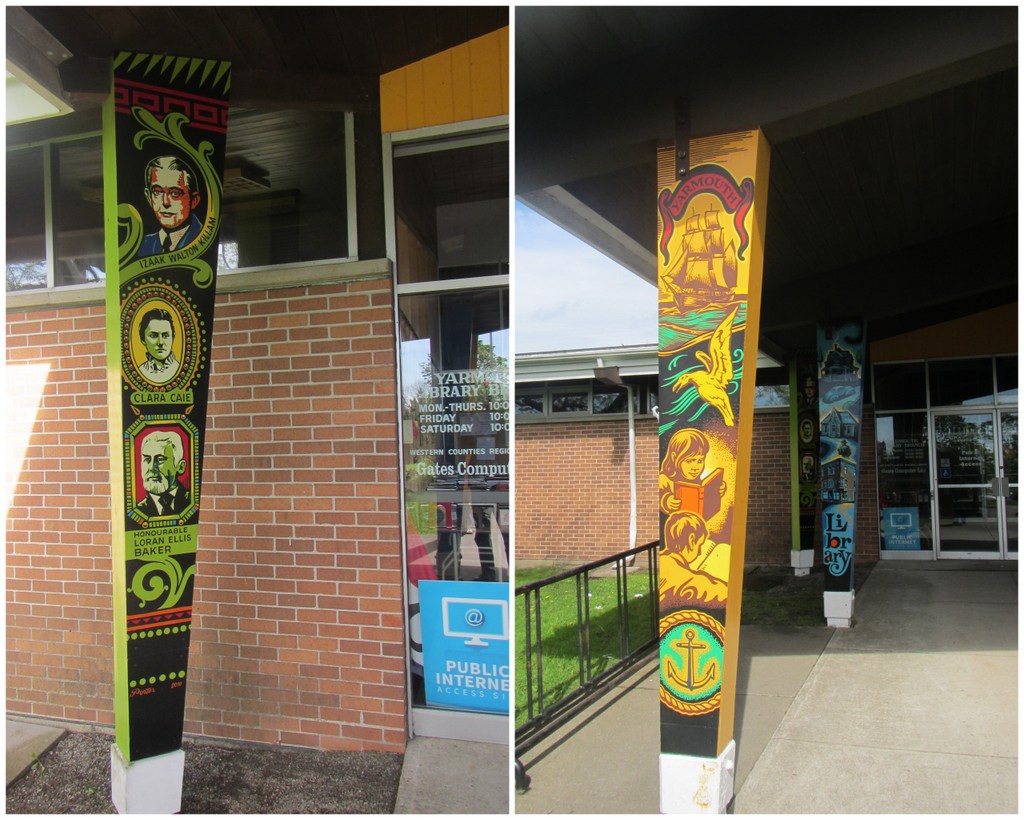 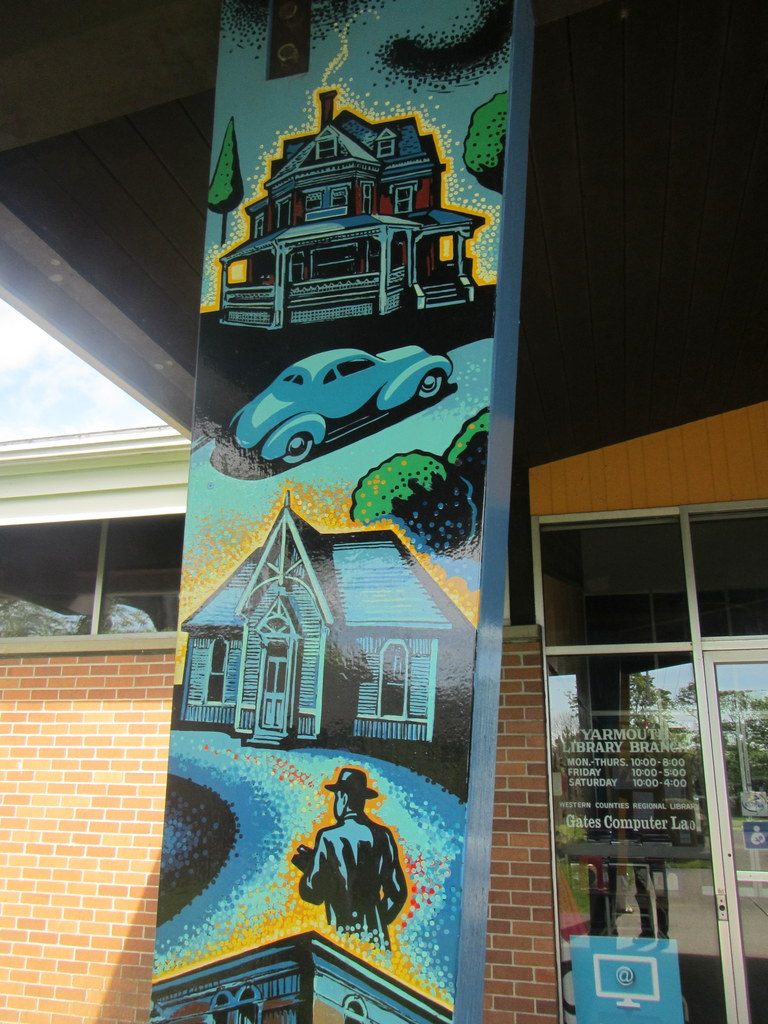 What seems to be causing a little stir at the moment are a number of restoration projects proposed by an entrepreneur who has returned to her home town.  A major project is to renovate the derelict old jail into a wine bar and art centre.  Her provocative and ambiguous signs have popped up around town . 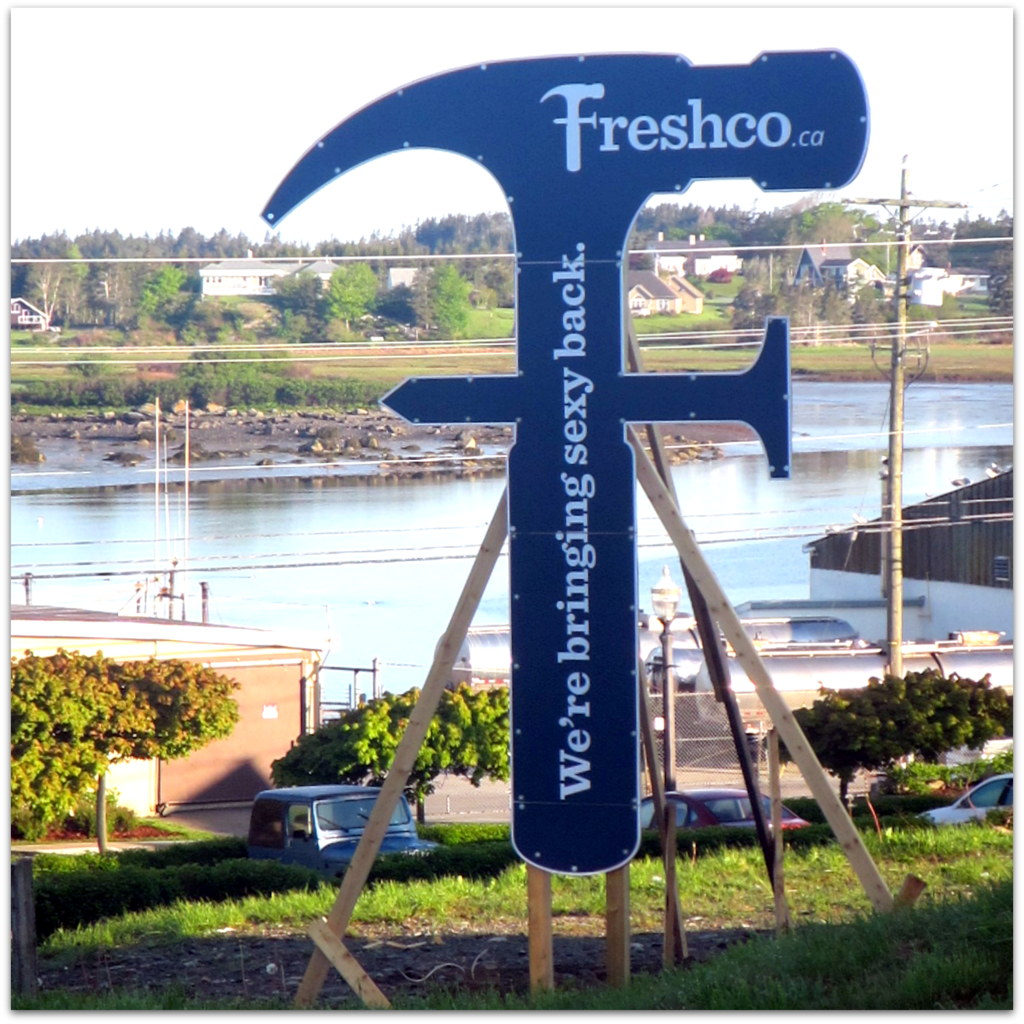 If none of this appeals to your taste do remember Yarmouth has an endless supply of domestic architecture gems – like this Gothic with the unique cast iron gate posts and stone wall. 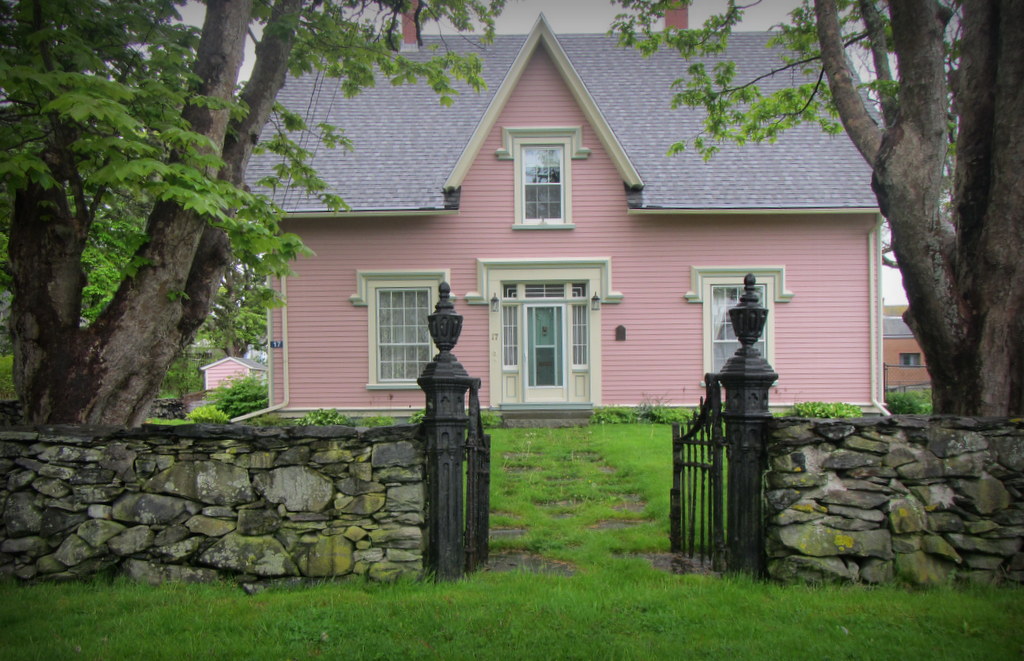