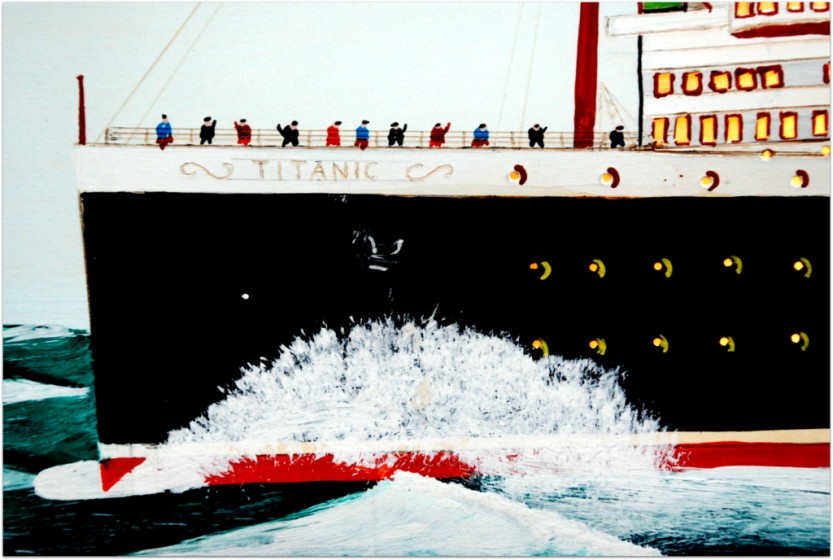 Somehow the anniversary of the sinking of Titanic has come around again. What a tragic event but it does not hold any enduring interest for me. Despite that admission,  we have a couple of representations of Titanic, acquired in the late 1970s. I like them a lot.

The first is a painting by a Southwest Nova artist named G. Sampson (Gerald?).  He shows Titanic steaming through the night while passengers wave at the viewer. The iceberg is off screen, as they say in the film world. We know what will happen so there is a gripping tension. The painting is especially charming because it is mounted on a light box and the portholes and moon glow.  The Canadian Tire price tags were still on the light socket and electrical plug so spare parts have never been a worry. Here is a comparison of lights off and lights on. The other Titanic was made by Tony Mann, a much loved design professor at NSCAD who turned to “toy” making when he stopped teaching full time. He captures the spirit of Titanic with a minimum of fuss.  Here the iceberg is lashed to the vessel, as if bound together by fate. I photographed these Titanic pieces a couple of years ago and at the same time I took pictures of another representation of transportation.  Friends brought us this  happy, little rocket girl from China. One of my favourite things.  Bye bye.