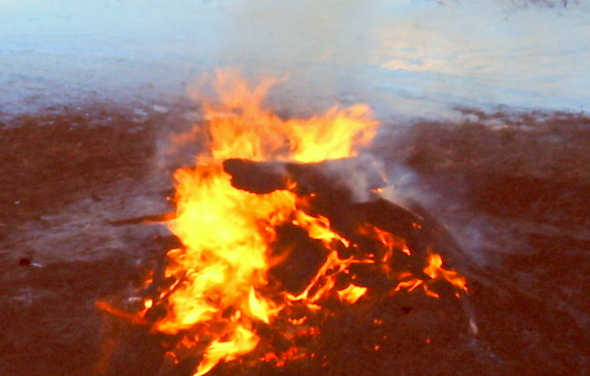 On April 30, 2009 we spent a happy day in Lunenburg County visiting friends and gardens. As we returned to the city we noticed what appeared to be a fog bank and thought, Our sunny day is over. Quickly we realized the fog was really a huge and growing cloud of smoke in the direction of our home community. We turned on the radio to hear a news flash that a wildfire was out of control in the Purcells Cove Backlands; houses had been destroyed and our street was one of several that had been evacuated. There was a moment of shock as I realized our home might be gone. Well Sheila, I said, you always wanted the chance to build a new house.

The fire was spectacular and ferocious that night. Viewed from the south end of the city the horizon blazed. It was close enough that you could see individual trees explode into flame. We were fairly sure our house was spared but did not learn for sure until the next day (twelve new homes were destroyed). We are now very aware how quickly a fire can get out of control and in awe of its power.

It was three months before we ventured across the highway into the burned district. The blackened skeletons of trees stood out against the bright green of young plants as a new forest was born. This was a scary fire but Nova Scotians have traditionally enjoyed a “good” fire. Just last week a friend who lives in the deep South End of Halifax, lamented she had to forgo her annual spring burning of garden waste because community standards had changed.

In the countryside I suspect it is still common to burn fields and ditches and blueberry fields. In the 1970s I was often in the Sherbrooke area of Guysborough County and there was something medieval feeling about fields on fire. Here is a view from 1978 near Wine Harbour of smoke rising from several fires in a large blackened field. Driving through Glenelg in about 1973 I happened upon a grass fire that had got out of control and was consuming a small barn. A skidoo had been rescued from the flames and men in plaid were having a conversation without paying much attention to the burning building. It would not be the first time they had witnessed such a thing. In the winter of 1973 a crew of carpenters from Sherbrooke Village disassembled an old barn frame for use in the museum. I was there to do some recording of the project and really appreciated the bonfire fueled with old barn boards. In the bleak winter landscape it was a thing of great joy. It turns out that scientists have determined that these jack pine barrens are “one of the most fire-susceptible landscapes in Nova Scotia.” Makes you wonder how houses could be allowed to be built in there or at least how the owners would get fire insurance.