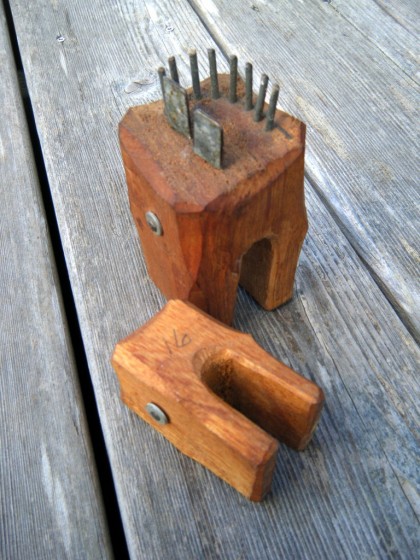 A while back I posted about killicks, the elegant wood and stone anchors used by fishermen. Many people seemed to appreciate the ingenious design, including a blacksmith who said he was going to make an iron version. All of this encouraged me to look for the few bits of fishing gear we have around the house.

In the 1970s and 80s I visited many of the marine-related businesses  that operated on the Lunenburg waterfront. One of our favourites was the Dauphinee Block Shop. They made all the blocks and dead eyes you needed to rig a sailing ship. They also turned oars.  We bought a number of little things in their shop including a dory bailer I liked very much but it really did not work as a dustpan.

What do still have are a couple of hook straighteners, workmanlike little jigs. In the days of dory fishing from big Banks schooners (Bluenose for example) the fish were caught on a long line of 550 baited hooks (trawl). The trawl was stored in a wooden trawl tub.  A hook straightener fitted over the lip of the tub so it was handy if you came upon a bent hook. You just slipped the hook over the pins on the jig and bent it back into shape. We have jigs for two sizes of hooks. 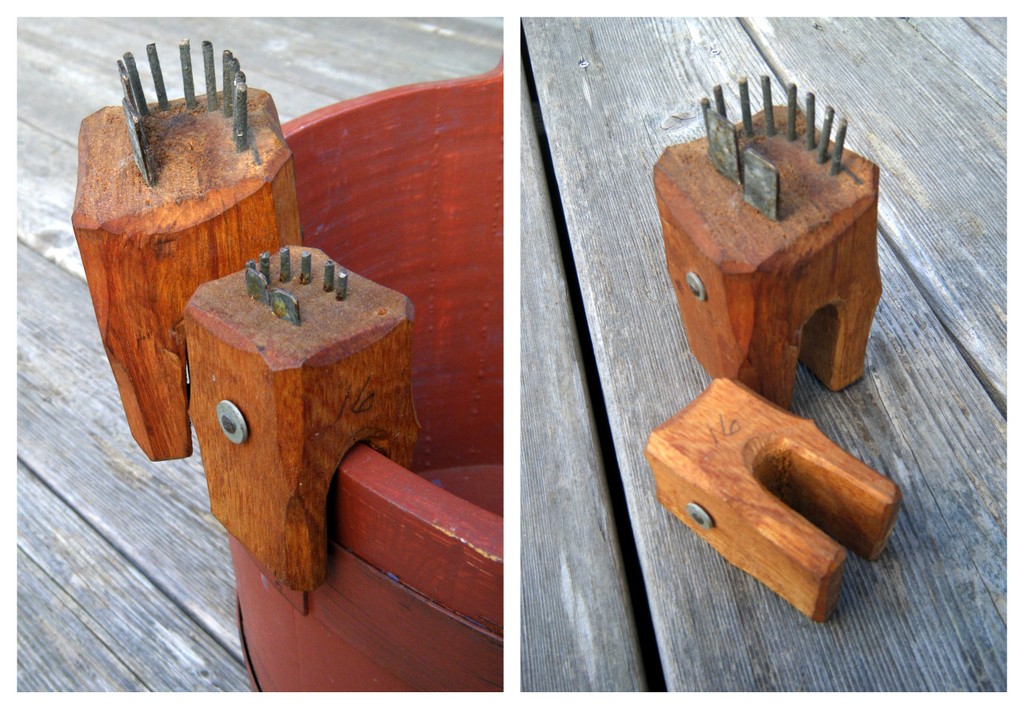 In the left photo the jigs are on a Chester Basin-made wooden bucket.  I did a little looking in the Nova Scotia Archives site for an image of hook straighteners in use and found a photo by W.R. MacAskill. 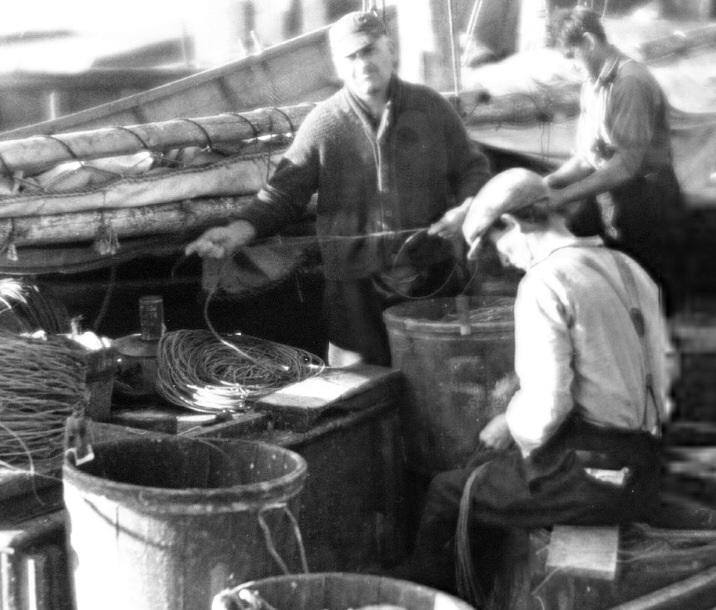 The scene is on the deck of a schooner and the men are working on trawl lines. Can you see the jigs attached to the top of the trawl tubs?

When the trawl lines were laid out at sea the end of the line was marked with a float that supported a pole and little canvas disk, called a high flyer. 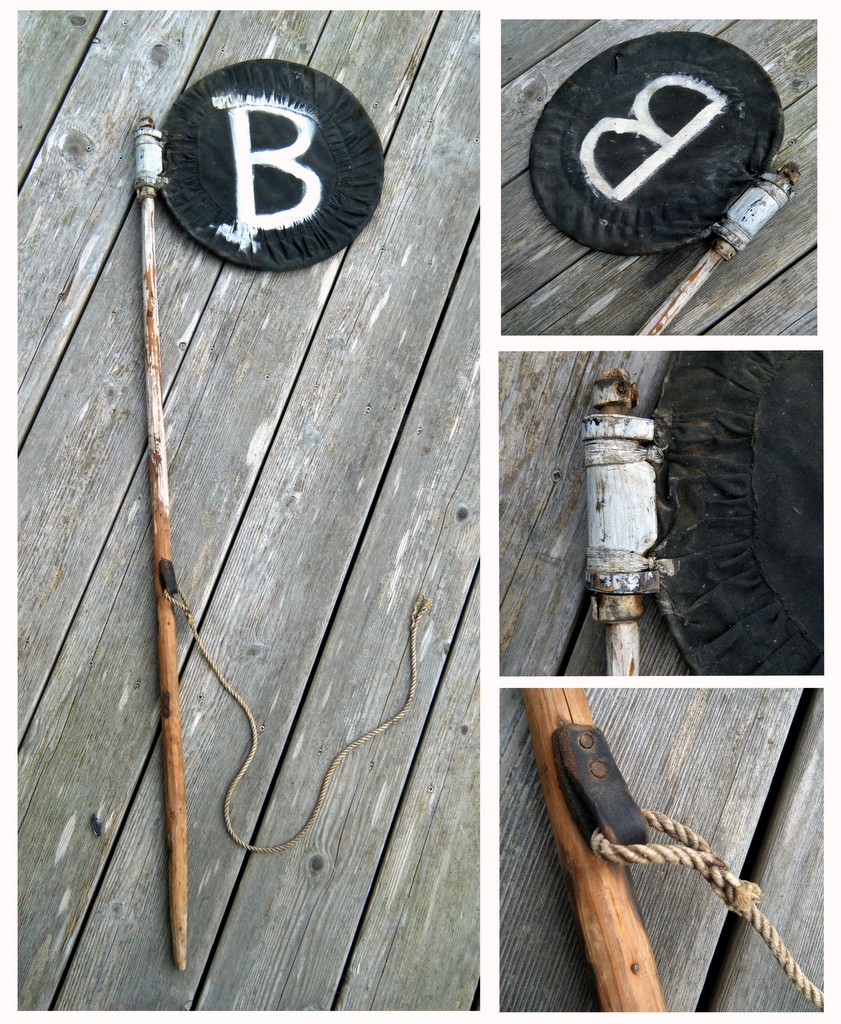 The initial B denotes whose trawl is being marked.  A little wooden socket allows the disk to rotate in the wind.

An artist friend gave us this unpainted lobster buoy because he admired the beauty of the simple form. We don’t have a lobster licence so it functions as a door stop in our cove. 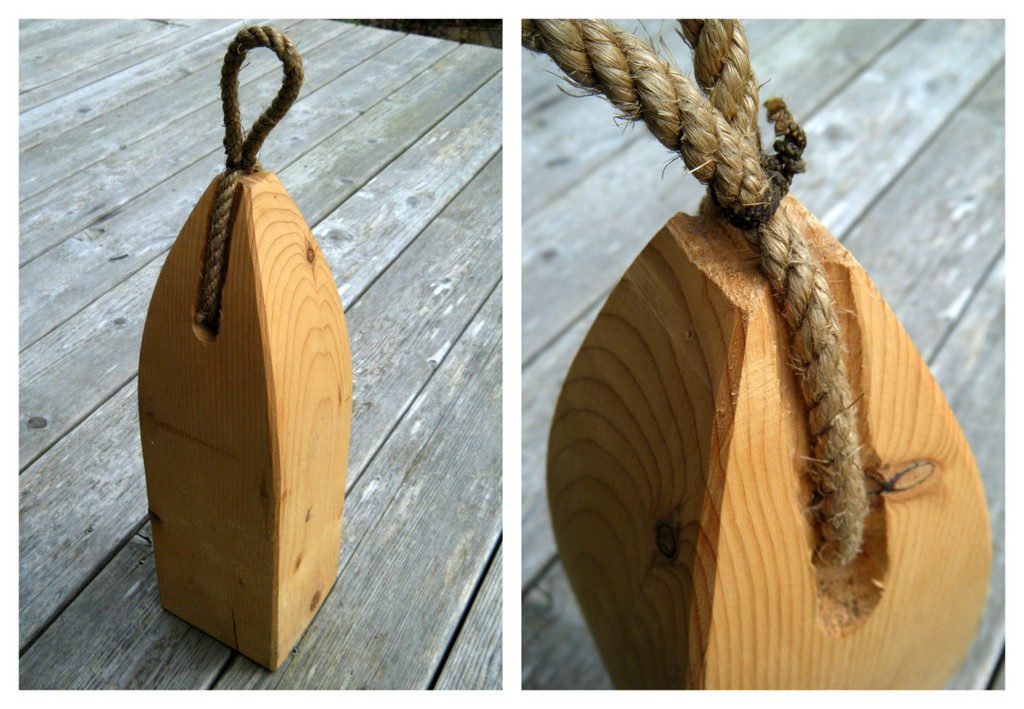 Fish was sometimes moved from vessel to dock in strong open baskets. I think these were perhaps made in Britain, at least you see them being used in old photos and paintings.

This basket was bought new in about 1975 in a ship chandlery on Water Street in Halifax. Makes a perfect laundry basket.

Nova Scotia has a rich, and a wonderful material culture.  There is lots of aesthetic energy in objects like these for us to channel into contemporary uses.

I used to watch for miniatures of traditional gear.  These were often carved by older fishermen or lumbermen or farmers who were very familiar with the real thing.  On the left is a miniature sheen broom. They were made from a single birch sapling  and were often found on schooners. I think they were good at getting cod scales off the deck.

The miniature lobster buoys were painted in the colours of local fishermen in southwest Nova  (their names are attached). 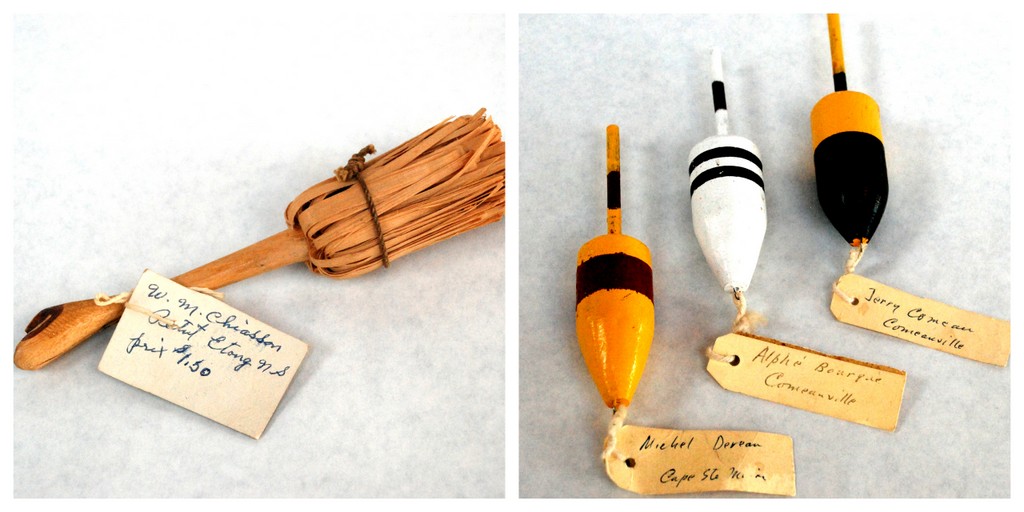