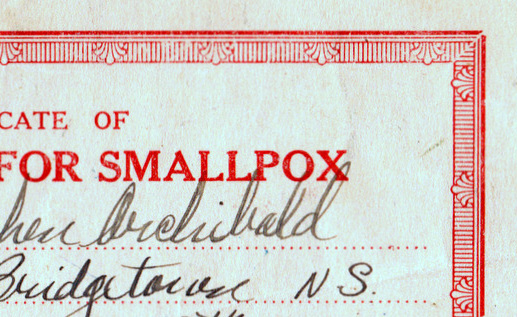 The recent bashing of anti-vaccer has been fascinating and probably deserved. It reminded me  that I have a couple of pieces of ephemera related to my vintage vaccinations.

We spent summers in Bridgetown and I got a smallpox vaccination in 1952 from a local doctor. The postcard-sized certificate is very nicely printed in red with an elegant border.  I think you needed the certificate to start school. The little polio sticker is a miracle of survival. Nothing pretty about its printing in 1962. My memory is that the Sabin oral vaccine was new and controversial. It was more effective than the earlier vaccine but carried a slight risk of giving you polio. It was administered at school and we all lined up and drank a little paper cup of the stuff. The “Have You?” on the sticker was to pressure the anti folks. Polio was a real threat in those days and I had seen enough photos of cheerful looking children in iron lungs to take my chances on the vaccine.  Actually I think we all felt a little brave as we stood in line. National Museum of Health and Medicine

I was looking at a Nova Scotia tourism booklet from around 1950 and noticed a small photograph captioned: Old man’s shadow on the Cabot Trail near French Mountain. Did you know about this? It was new to me. Today it would be called dude in a fedora. The image reminded me of something and I started by looking at a lot of James Thurber cartoons (never a mistake).  Finally I realized it suggested Jimmy Stewart in the 1950 movie Harvey about an imaginary rabbit. Actually when I drive through valleys like this I always say: yea, though I walk through the valley of the shadow of death, I will fear no evil. Are there other shadows in the province I’ve been missing?