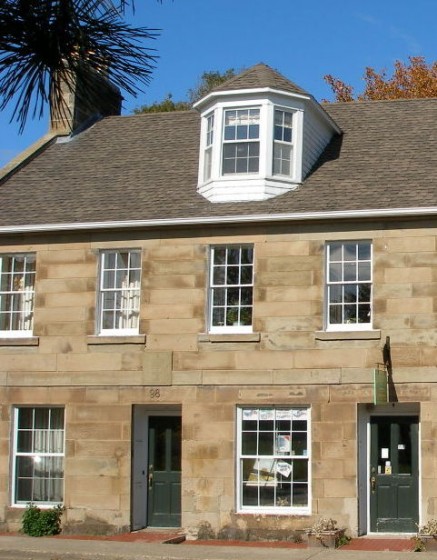 Many people seemed to enjoy a recent blog about storm porches (partially because storm has become a synonym for tasty). These porches are easy to identify once you know to look. Another local architectural element that is notice-worthy and is particularly loved is the Scottish dormer. Or as it is sometimes described: the so-called Scottish dormer. 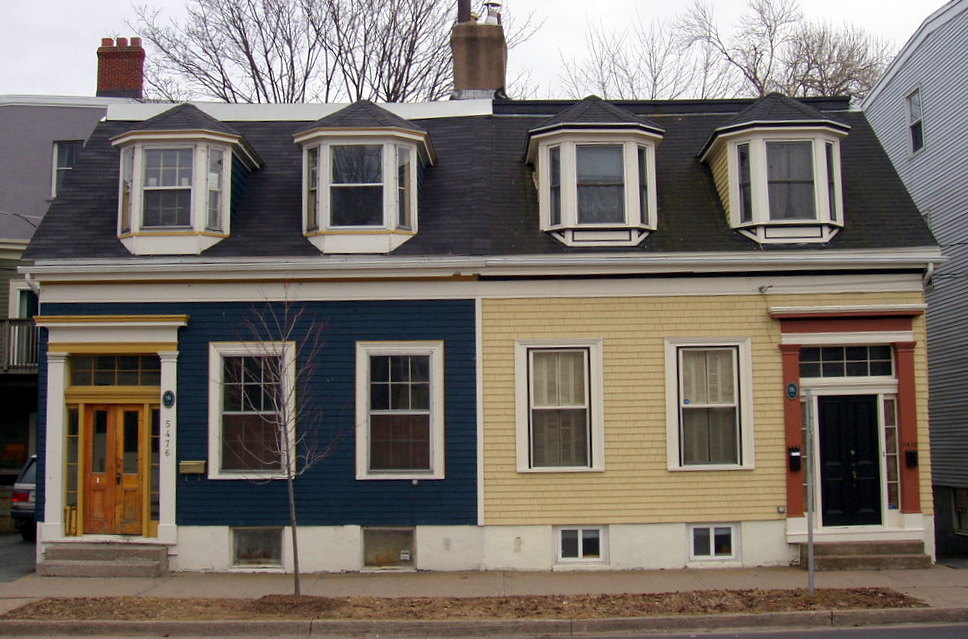 Basically it is a bay window set in a roof which provides light and head room to an otherwise cramped space. They are often called five-sided dormers because the common dormer has three sides. Just to be clear, here in Pictou are houses with five sided dormers flanking a three sided dormer house. 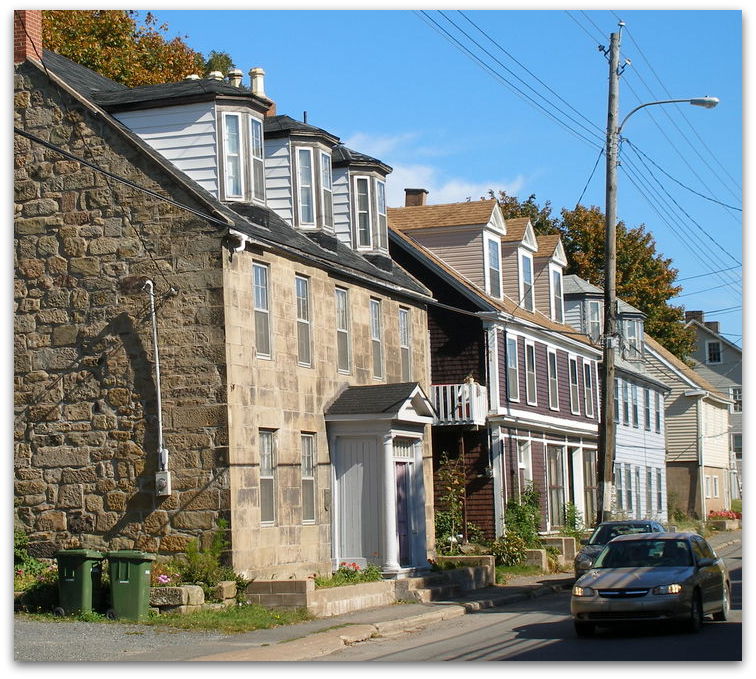 Pictou has been considered ground zero for these dormers in Nova Scotia. In the early 19th century the Scottish settlers of  the town had the resources to build substantial homes and many of these reflected the architecture they had left behind. Both stone and wooden homes often have the five sided dormer. 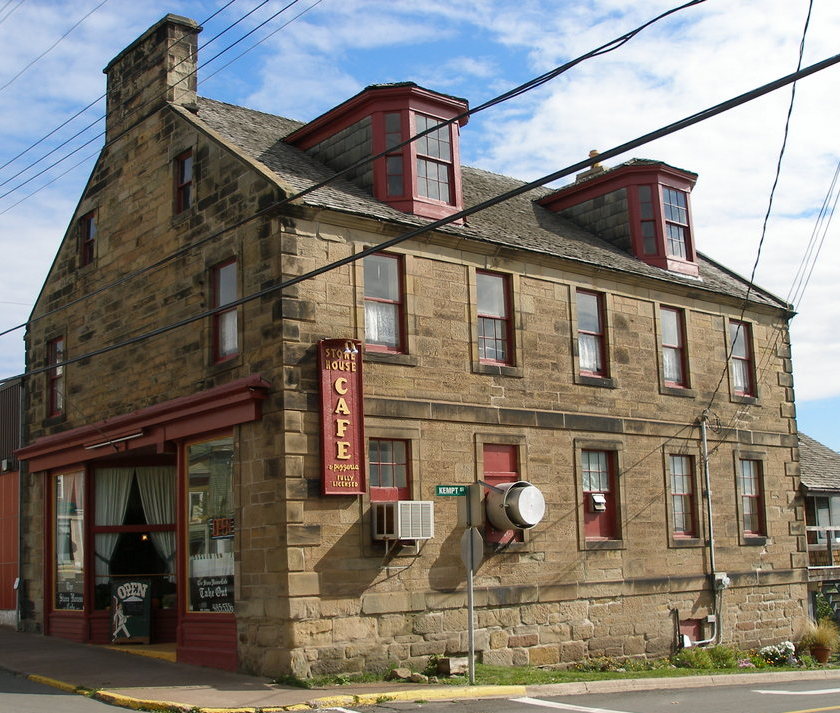 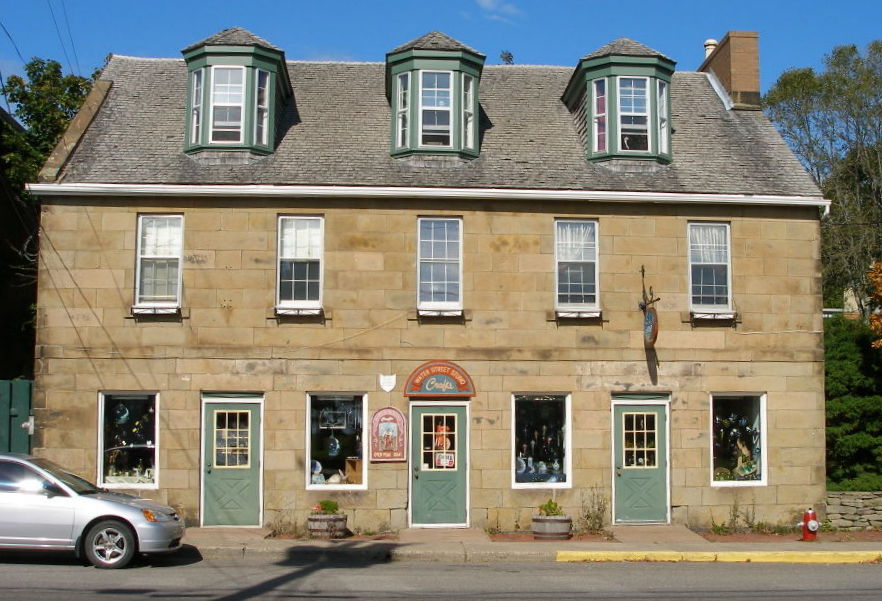 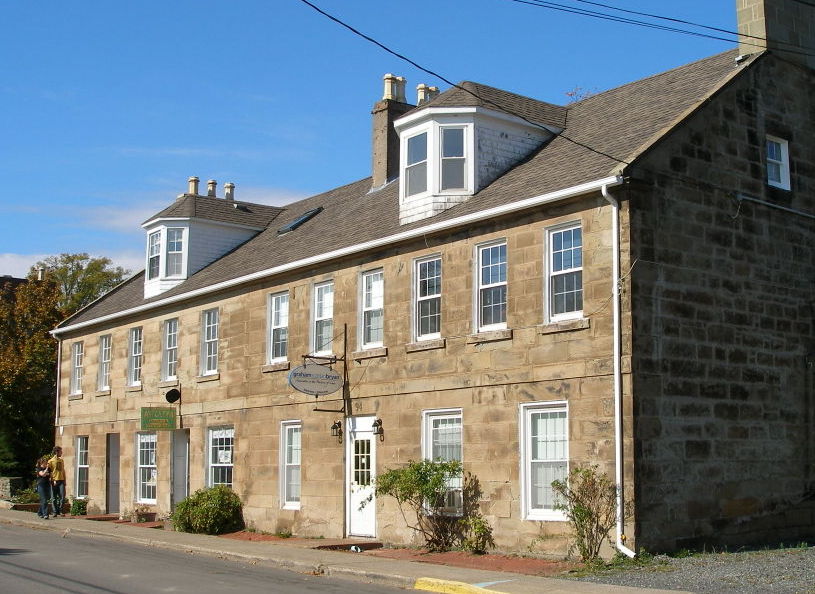 Perhaps the oldest surviving houses in Halifax with Scottish dormers are in this early 19th century row on Hollis Street that does feel like it has kinship to the Pictou stone buildings. The dormers are smaller and more orderly (line up with the other windows) than many of the later examples. 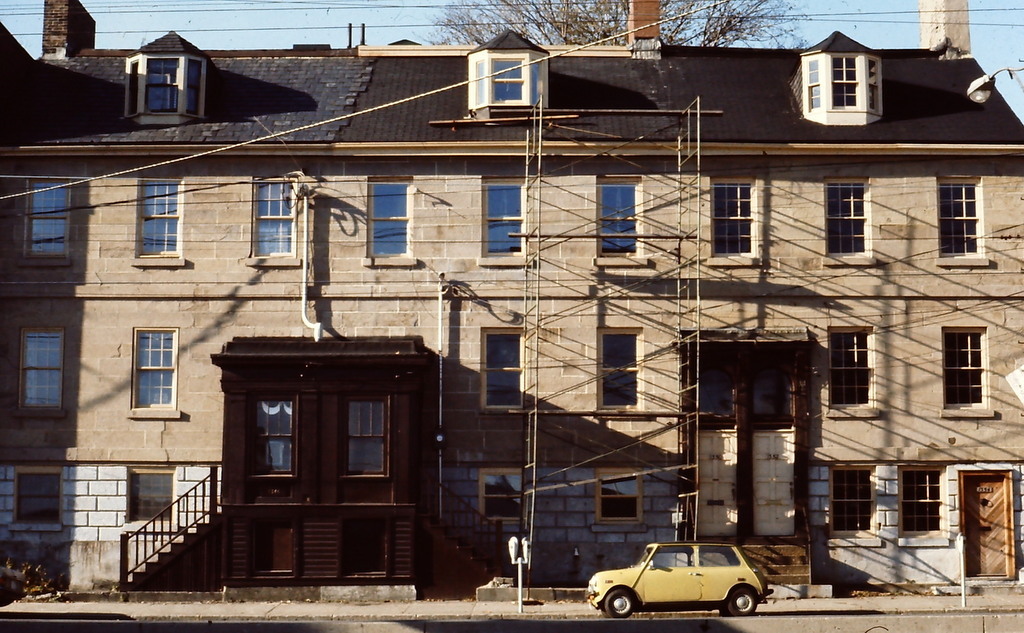 For much of the rest of the 19th century the five sided dormer was a Halifax favourite. Look for them in the older sections of the North and South ends. Here is a little gallery to give you a search image.

One of the most striking examples of these dormers is the row of houses on Morris below Hollis (actually this is a great dormer observing area). 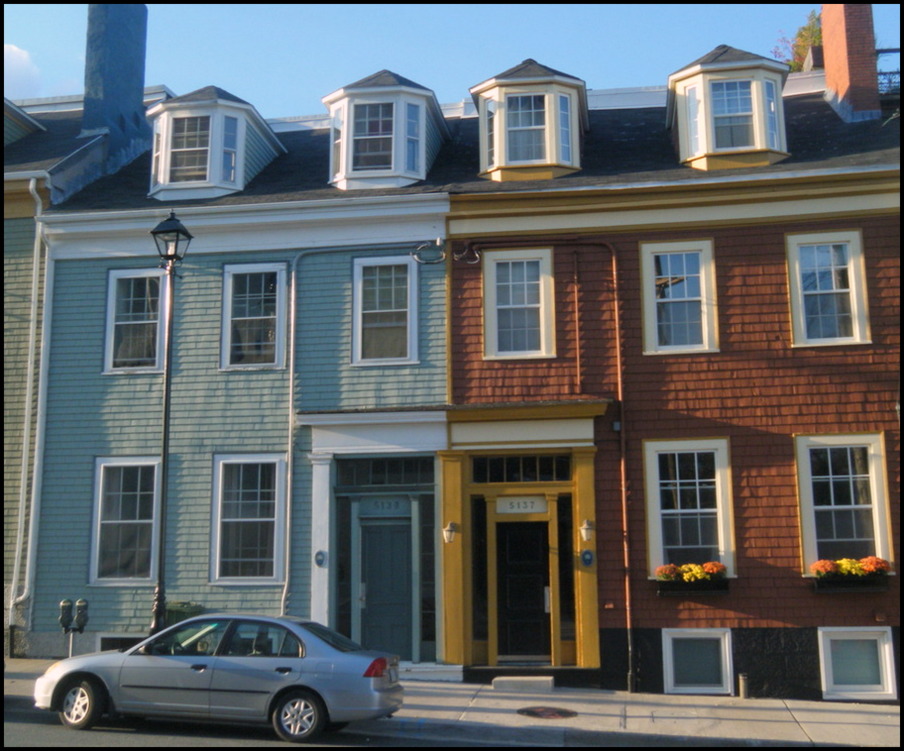 This story and a half row on Bauer has been well thought of for many years. 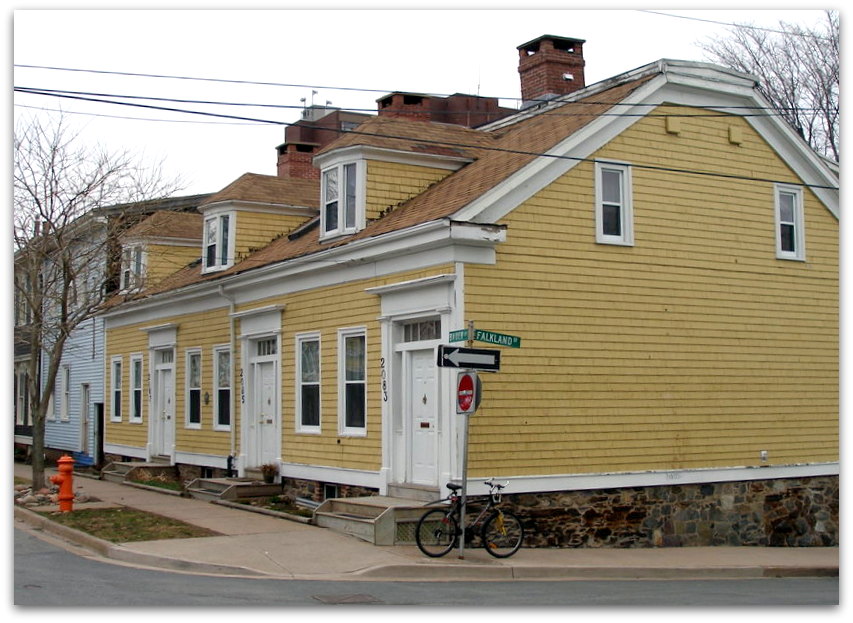 I believe this 1977 photo is of a dormer on Dresden Row. It had the feeling of being untouched, with original mullioned windows and a roof with no overhang.  Must have been cold up in that attic . 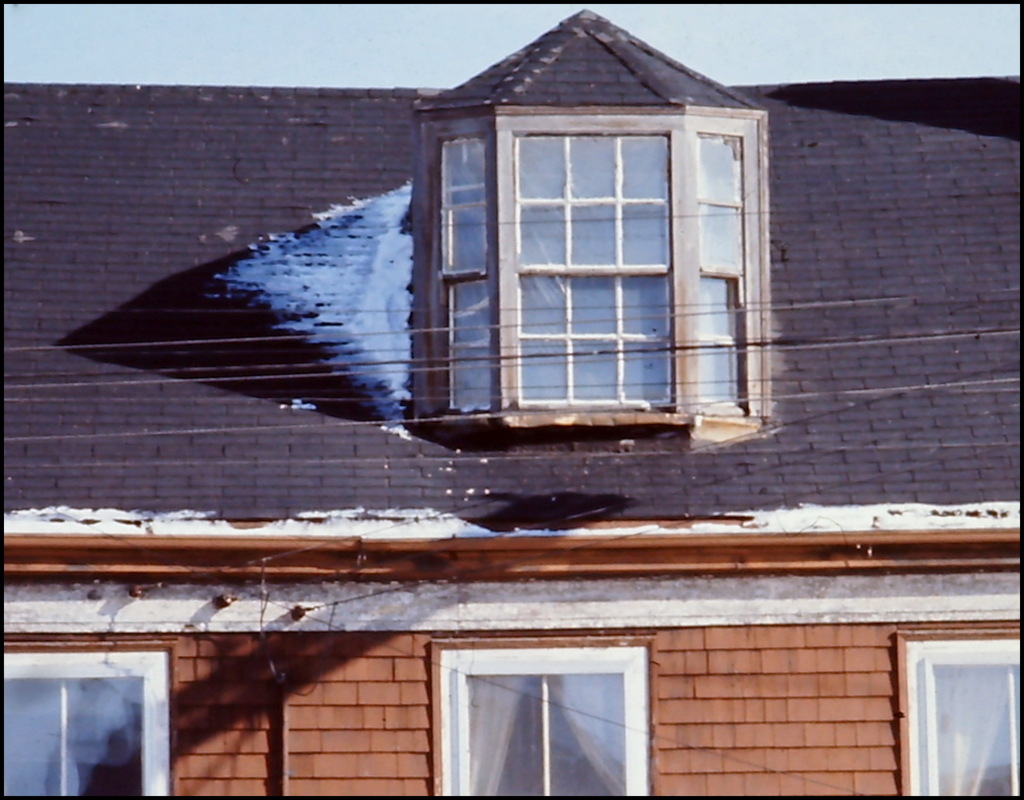 Dormers were often added later in the life of a building to create more functional space under the roof. This double house on South Street has wildly mismatched dormers neither of which seem quite right for the house. 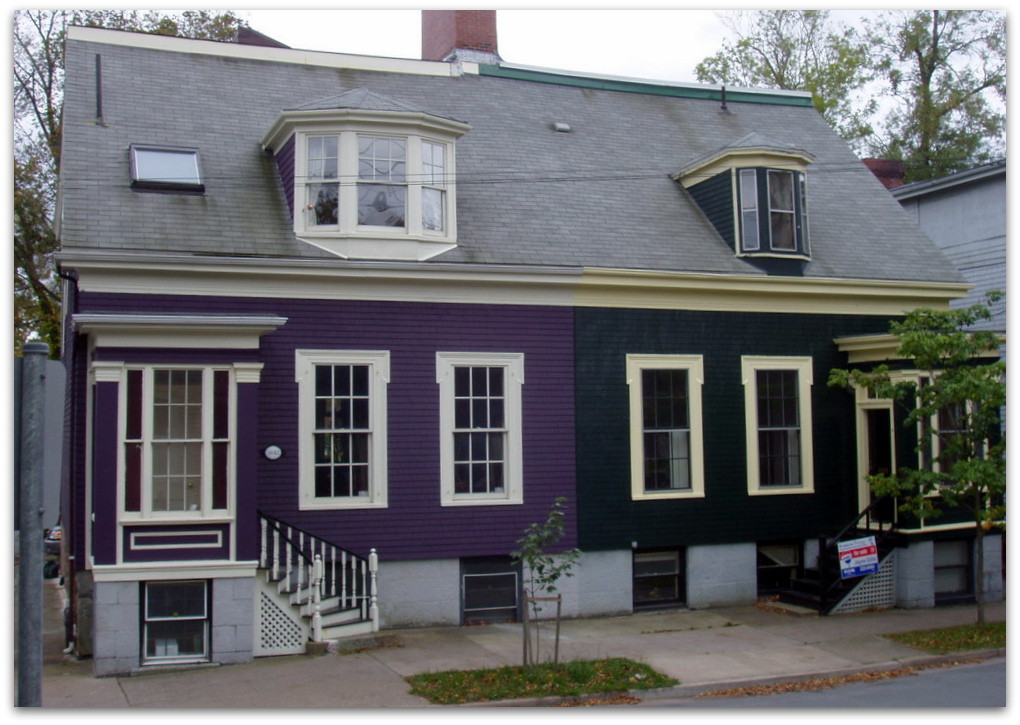 As our love affair with the five sided dormer endured they were sometimes adapted to fit the current style. These dormers on Mitchell Street are heavily bracketed to suit the picturesque style of the house. 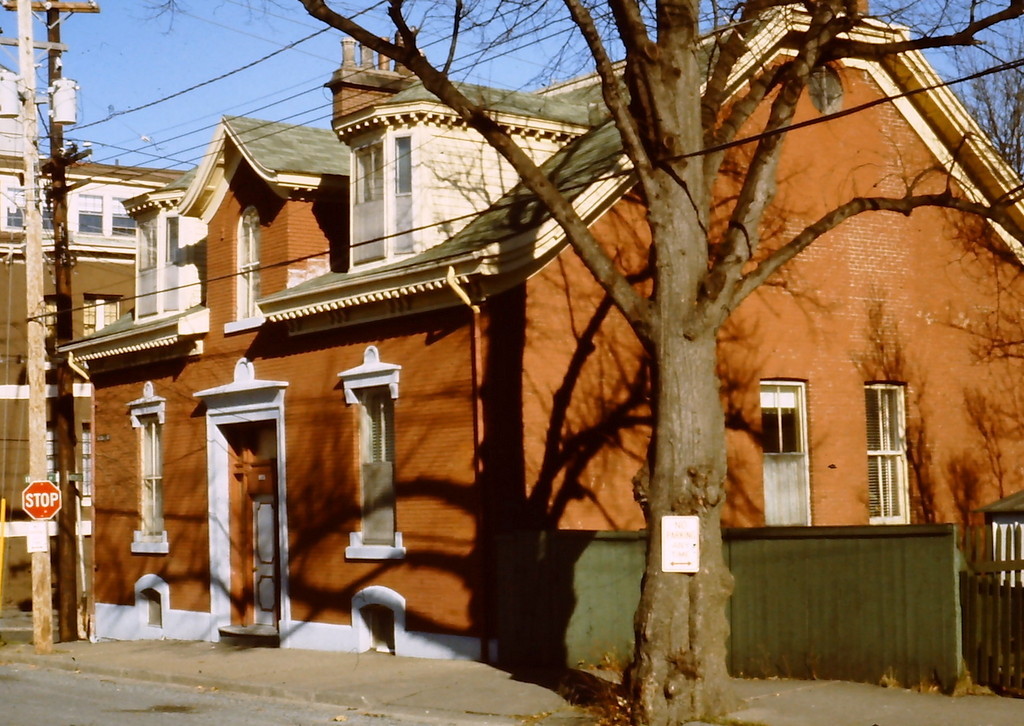 This Greek Revival cottage on Robie Street should never have Scottish dormers, but they do make the second floor usable and totally Haligonian. 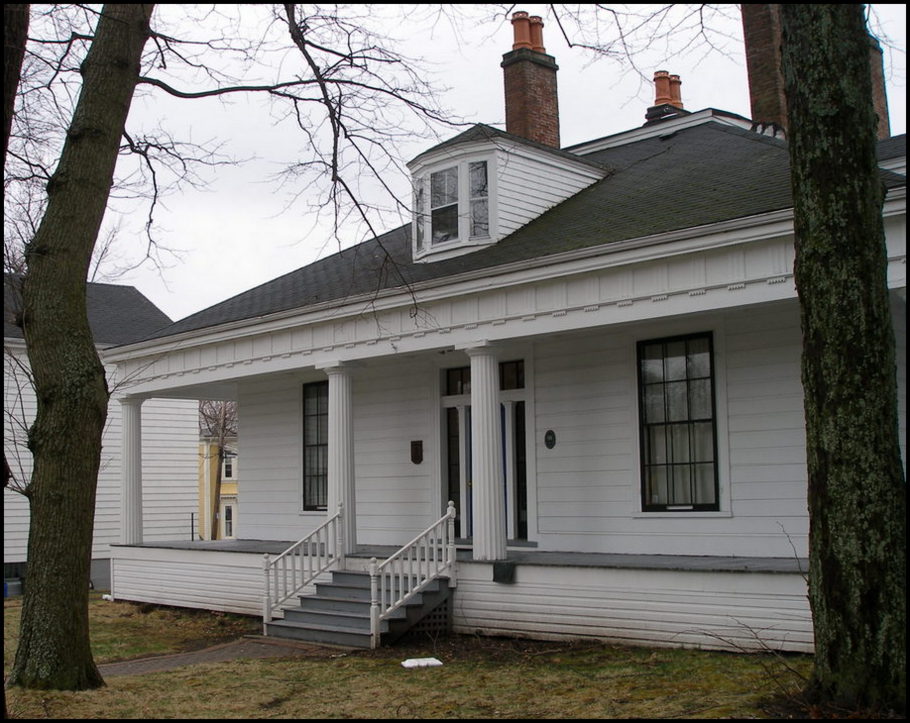 Because the five sided dormers can be tricky to maintain, you will sometimes see examples where the roof remains but the side windows have disappeared. Not the happiest solution. 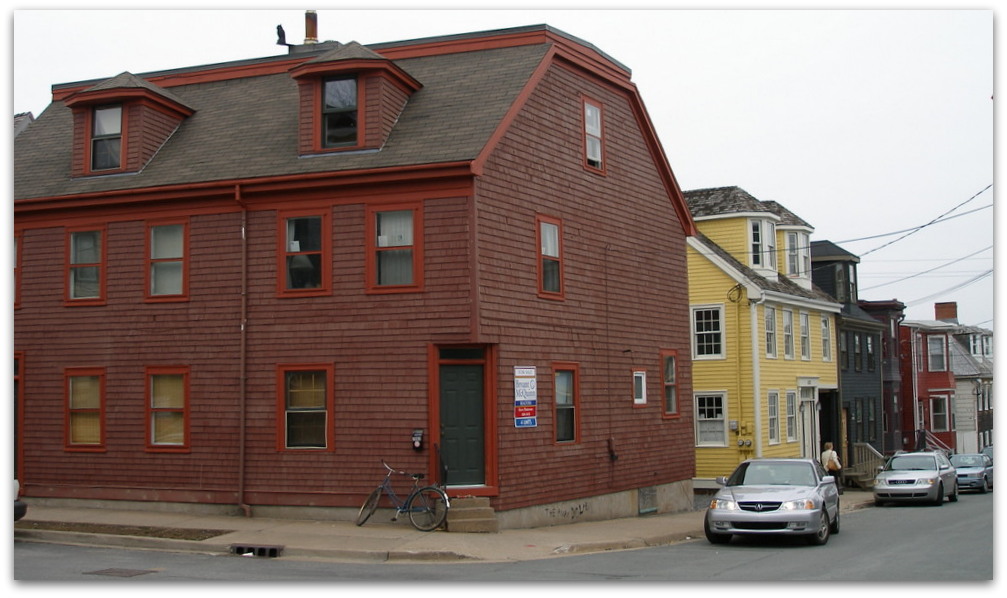 Scottish dormers do pop up around the province so keep alert. There are a couple of great examples on the Eastern Shore including this wonderful collection of white architecture in a northern spruce forest. Makes my heart glow. 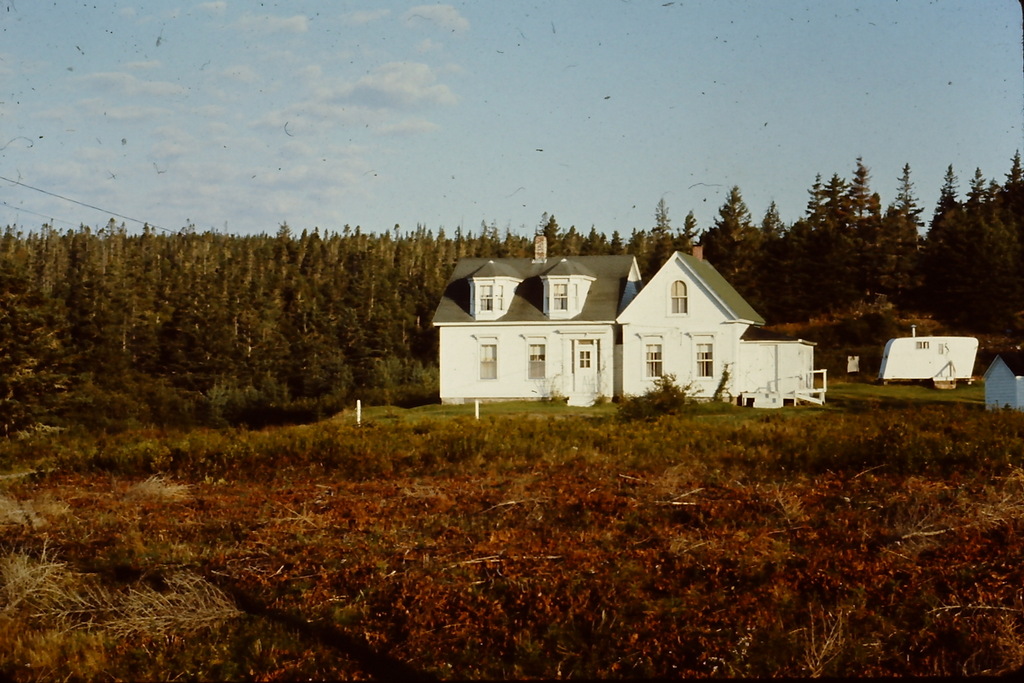 This dignified and orderly example is appropriate for Wolfville. 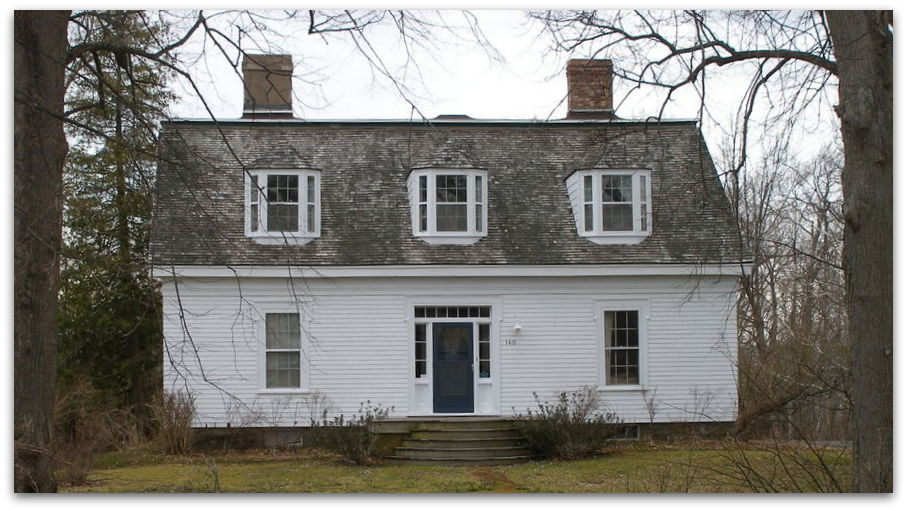 The folks in Lunenburg have always enjoyed doing things their own way.  Somehow they threw the five sided dormer into a big pot with a bunch of other ingredients and came out with the Lunenburg bump and UNESCO World Heritage status. Amazing fun, but all of that is a story for another time. 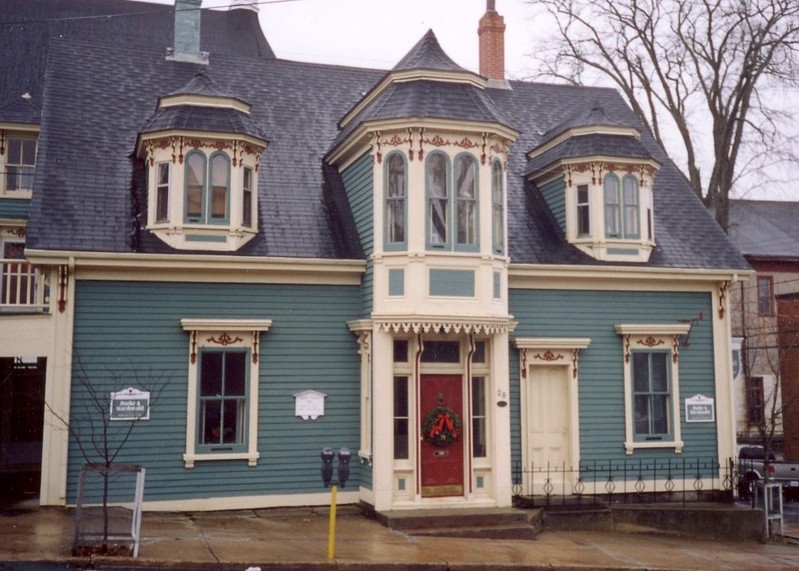 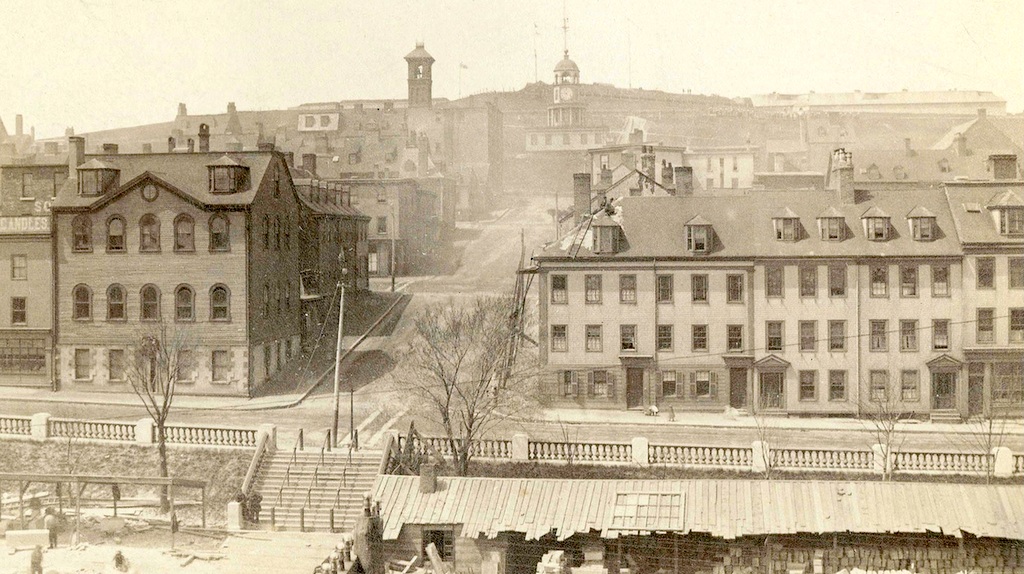 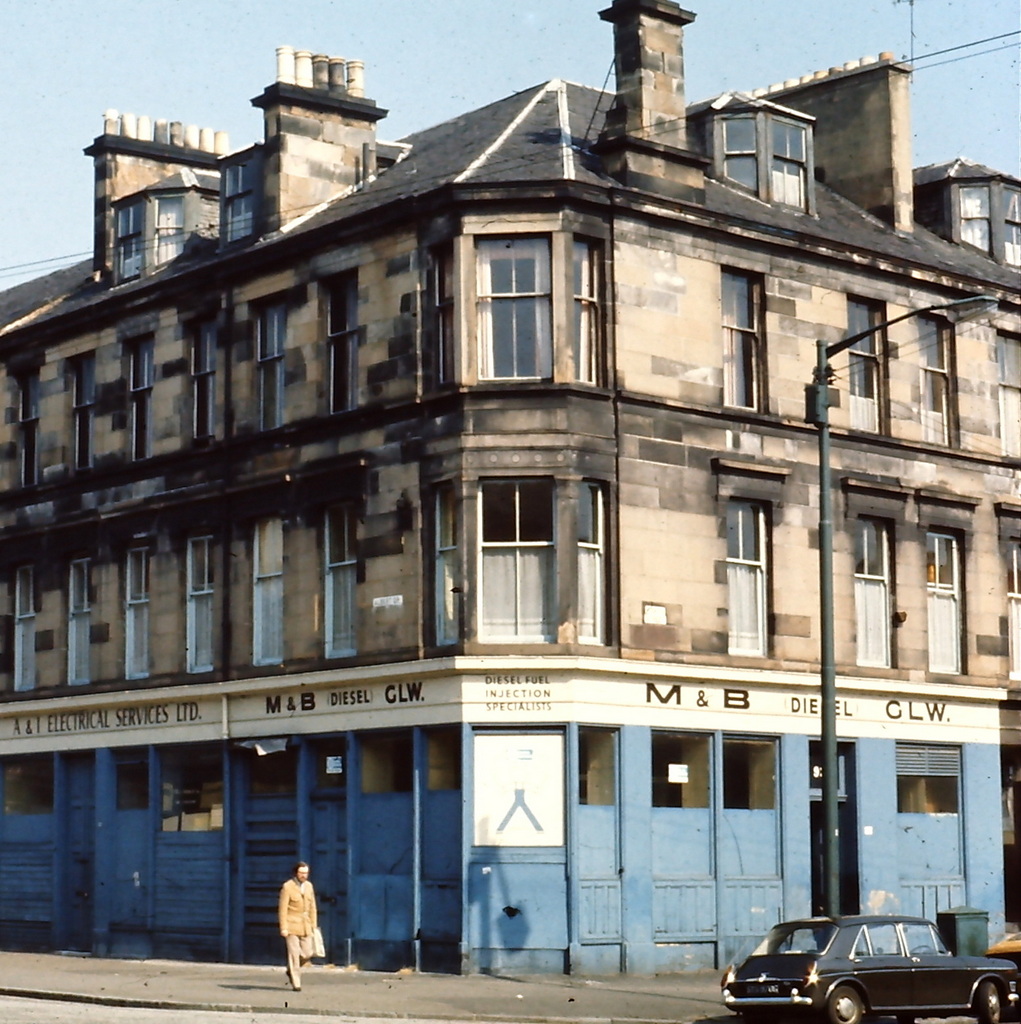 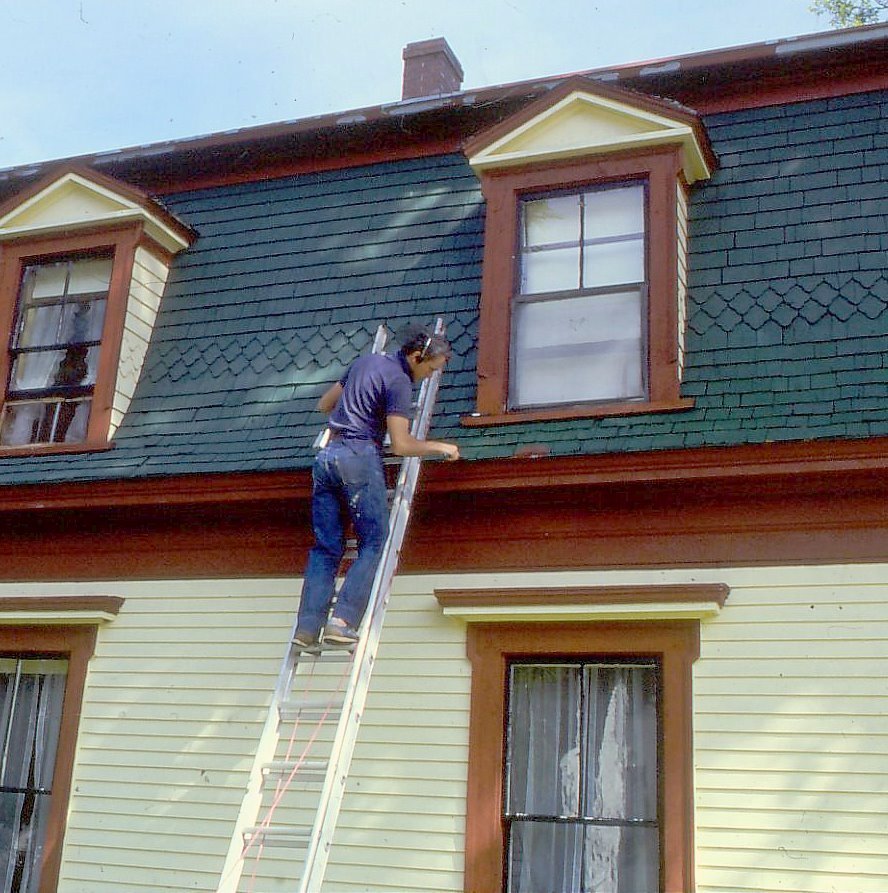