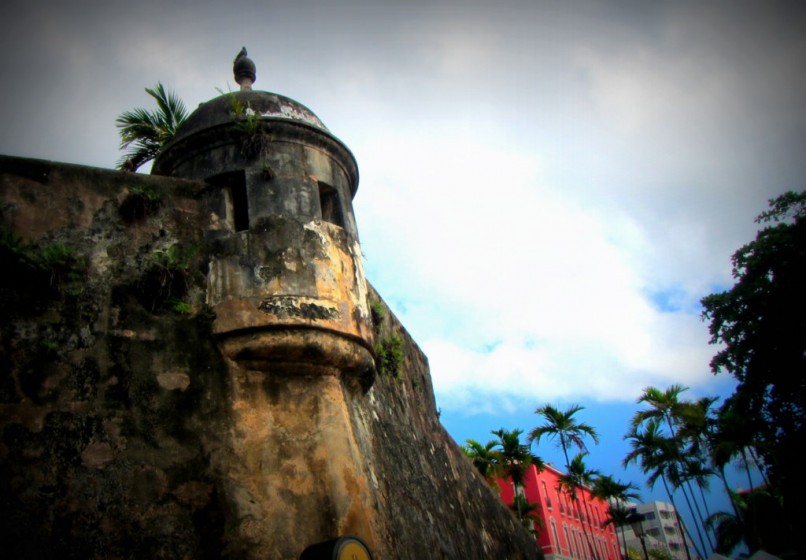 I’ve been enjoying those videos of cats in snow drifts and the search for buried cars. But maybe you are ready for some contrasting images from further south.

Last month we spent an overnight in Old San Juan, Puerto Rico on our way to a smaller island.  We have done this before and enjoy the chance to wander the cobblestone streets for a couple of hours.  And of course we compare and contrast with back home. I thought you might be interested in some things that caught my notice.

Old San Juan is OLD, first settlement in 1508.  It had walls and forts and a history connected to all that Spanish Main/pirate  stuff.  Their forts have guerites, the picturesque little sentry boxes that project from the walls.  The perfect tourist icon. When the final Halifax Citadel was built the strategy was to have fortifications hidden by earthworks so we are missing this sort of romantic detail. When I searched images of the Citadel  what popped up was not inspiring. The best are aerials that show the star shape and the expectation of a view. The streets in San Juan are very narrow and and some are fairly steep.  Sort of like downtown Halifax with snow. It felt like the expectation was that vehicles would move slowly and cautiously. As a pedestrian it felt safe.

Along the edge of the harbour is a shaded walk with pocket parks and sculpture installations. I wonder if there has ever been thought of putting a parapet/railing on sections of our harbour walk. It really changes the feel. The streetscape is enhanced  by an attractive suite of street furniture (bollards, tree grills, benches). The trash bins are so refined they look like mail boxes. The consistent colour was very effective.  In Halifax we would be better served if we stopped mindlessly painting metalwork black. The fence around the Public Gardens was originally intended to be green and in Britain iron work is often painted a deep maroon. Some buildings are painted in garish colours (like those unfortunate buildings in Lunenburg) but often there were sophisticated colour schemes that felt very appropriate. Made me remember that I never heard what happened to the paint that Quinpool Road won from Benjamin Moore a couple of years ago. Couldn’t find any celebration of the results online. There was a lot of good quality public sculpture. Much of it appeared to be relatively recent.  If there were statues of dead white men I don’t remember them.

There was a statue and a museum to a beloved and long serving woman mayor.  What have we named after our former Halifax mayors? A few streets? The  morning we were walking around, the city was preparing for a huge street fair (the largest in the Caribbean). Very glad we escaped before it started. It was interesting to see works crews assembling cardboard boxes to go on every corner for garbage. Felt like a smart idea. And then there were cats. In great numbers, some cared for but many appearing to live comfortably on their own. After spending some time in the south I always end up feeling content to live in a northern land. I enjoy our seasons.  A number of years ago we were in Brazil and spent a few hours with a farmer who had no experience with the outside world.  I told our host to tell the farmer that in our land we needed a second set of tires for driving in snow.  He looked amazed and said “why would someone live in a place like that?”