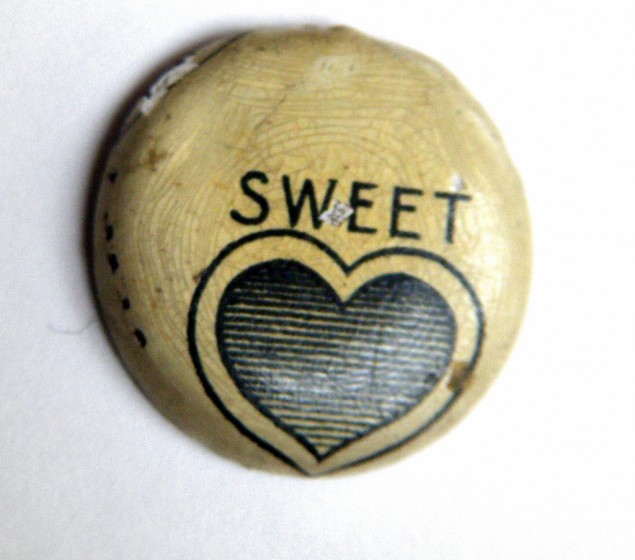 I have a very short span of attention so after shovelling snow for awhile I got distracted and went for a little wallow in the snow clogged garden.  A garden bench was buried but still showing heart. Got me thinking about showing you some heart shaped objects because VALENTINES! It also made me remember I’ve been considering a series of posts that could be described as: “in praise of stuff.” There is a lot of praise of decluttering happening. Some of my colleagues are documenting their journey. I wish them well. As a gentle rebuttal let me just show some hearts I found around the place and tell some of the rich memories they evoke.

The garden bench was given to Sheila when she retired from the museum. It was made in Ross Farm and there is a little plaque on the back that declares their love. Since it has been in our life it continues to attract memories; I refinished it with paint made by Tibbets in New Glasgow – a little can of high gloss implement paint we had been carrying around for about 25 years.

Continuing with wrought iron hearts, there are several heart shaped hooks in our entrance for hats and scarves. These are new and show there are a number of great iron workers in the province at the moment. They evoke the oldest heart we have, a trivet with long legs so it could sit over hot coals in an open kitchen hearth in the early 19th century.  It came from the Bridgetown area and is a piece of exquisite beauty. The more I look at it the more I learn. Objects often tell us about their time and these little tin heart shaped  boxes feel very 1980  to me. Maybe they are still produced, but new they were perfect little expressions of the moment. These hearts probably both date to around 1900. The little ceramic , hand painted heart was a stud to be used in woman’s clothing. The sweet heart was a tin pin that came as a bonus with cigarettes or candy. They both trigger vague memories of locations in my childhood houses. This textile heart was made by the under-celebrated artist/crafts-person Gloria Drysdale. It was given to us by a friend and we appreciated it as a beautiful object.  A couple of years later we mentioned the heart to Gloria  and she told us the story.  Her ex-mother-in-law had done a big piece of needlework but never had finished it.  Rather than waste the work Gloria cut it up and made it into stuffed hearts.  Another friend had given her a bunch of antique ribbon from France and that got added. We now had a beautiful heart with a bitter sweet narrative. When I went to Cornwallis Junior High in the early 60s  we had Manual Training (Industrial Arts) every Monday morning. Half the year was wood working and the other half metalwork.  The only surviving evidence of my experience is this heart shaped cookie cutter.  I’d give myself high marks. In 1971 there was an amazing week of public engagement in Halifax called  Encounter on Urban Environment.  (Skip Netflix some evening and look at the NFB film – it’s a mind bender.) The Design Division at NSCAD produced a big sticker for the event that they encouraged folks to stick on bits of Halifax that they felt “enhances my world.”  The Swiss style graphics heart was  by design professor Gerhard  Doerrié (this was 6 years before Milton Glaser’s I heart NY image). What a rich collection of memories these objects triggered. Memories that might have been lost without a little heart.