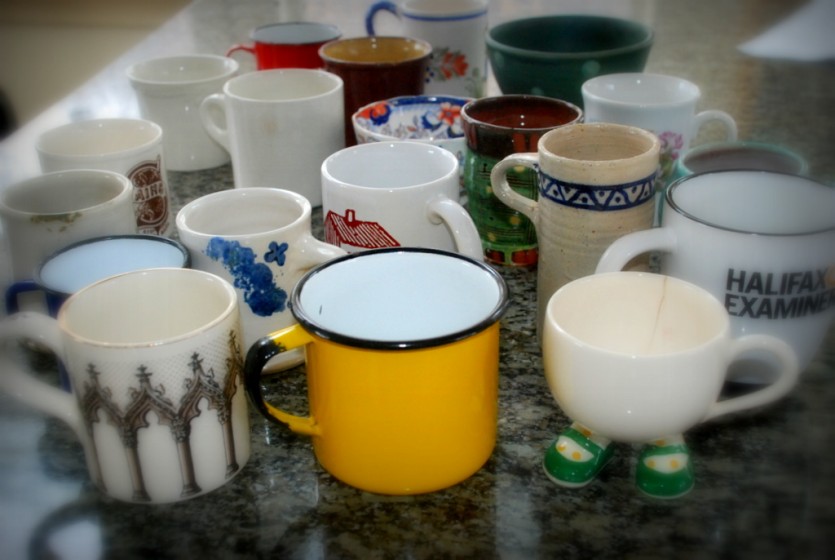 With coffee and coffee culture so ubiquitous it takes me a little effort to reconstruct a time when coffee meant instant and the mug was new.  As part of my praise of stuff campaign I went searching  to see what evidence still survives of our mug heritage.  Even I’m surprised.

I think of the modern mug emerging in the mid 60s but that is perhaps when I started noticing.  I remember buying my first mug in St John’s Newfoundland when I had a summer job there in 1966 (blue and white ). The oldest one I can find today is  blue enamelware, a later summer job purchase (made in Yugoslavia).  Like the children we were,  bright primary colours attracted us in the 60s. I don’t recall where the red and yellow came from but I do remember enamelware got very hot and was not a great mug to hold. Enamelware was clearly not your mother’s teacups.

This mug came from Mexico in 1969.  It is tall and narrow and was purchased because it reminded me of modernist Scandinavian  pottery seen in books. Always better for flowers than drinks. On a weekend to St Pierre in the summer of 1969 I learned about liqueurs and came back with this traditional feeling earthenware mug and a bottle of B & B.  Turns  out to be Quimper faience from Brittany  and quite collectible. Strangely never a great coffee mug. In my memory,  pottery coffee cups started being used for advertising or promotion early in the 70s and the idea spread rapidly (like the flu).  A friend in England  worked for the a design company that did promotion for the national grocery chain Sainsbury’s. She gave us several mugs decorated with old Sainsbury’s ads. This is the last one – found in the garden shed without a handle, holding plant labels. Here is a little context. A sister of the Sainsbury’s mug is on the breakfast table in Sheila’s flat on Smith Steet in the late 70s. There is also a heavy yellow plastic mug (easier to hold than enamelware) and a popular design of coffee thermos.  The mug also shows up with Sheila – bright accent colours and clean design gave us pleasure. And one word: Plastic. Pottery mugs became commonplace and they were often decorated very poorly.  I was careful when selecting mugs to use at work during the 80s. Coffee cups could now be public statements about what you were about.

We think this Gothic design came from the V&A Museum shop. I broke the handle. Then I got this one somewhere in New England. But I dropped it. Both these mugs now hold pencils and coloured pencils. I’m quite comfortable with glue. This British Walking Ware footed cup was undoubtedly intended for tea but I used it for coffee at work and broke the handle and one of the legs.  It is exactly what the 70s felt like. In the 70s we used to visit friends on the islands at the end of Digby Neck.  Robichaud’s, the general store on the waterfront of Westport, Brier Island, sold a huge mug that was used by fishermen (probably for strong tea or stronger).  We bought all the stock that was out and Mr Robichaud promised to look for more  in storage.  Unfortunately the store and any remaining mugs were washed away by the giant Groundhog Day storm of 1976. By the mid 70s it was easy to purchase mugs made by local potters.  Our earliest survivor is by Birdsall Worthington Pottery, still producing in Mahone Bay.  I was very fond of the traditional form and local clay. It got used mostly as a shaving mug. Here are a couple of beautiful mugs from unknown potters. Bought at NSCAD sales in the 80s or 90s. Both have breaks. We got these mugs about 10 years ago at the O’Dell House Museum in Annapolis.  They were made especially for the museum by Lucky Rabbit Pottery  following the design or inspiration of Leslie Langille who knows a thing or two about antiquities. We loved the form and sponged decoration. Until recently there was a tiny china shop in Canning, a strange survival from another time. We bought a couple of these mugs there because they felt so ironically perfect. The Mayflowers are not quite right but if you needed to give a souvenir mug to an idealized grandmother this is a contender. For several years this century I used this antique cup for morning coffee. It is really BIG and beautiful. At Christmas @HalifaxReTales tweeted that a Tim’s gift card was a gift that showed you knew nothing about the recipient.  A coffee mug can play a similar role.  A while back I met Tim Bousquet for the first time and the first thing he did was produce a Halifax Examiner mug.  It is a lovely, large, comfortable and contemporary mug.  I knew he must be OK.  (If you subscribe to the Examiner I believe  you can get one too). And after all of that, what mug do I drink my coffee from today?  At breakfast I drink a very milky, very large coffee out of a bowl like a little French child. I’m very fond of the French earthenware bowl . . . but I can change if something better comes along.