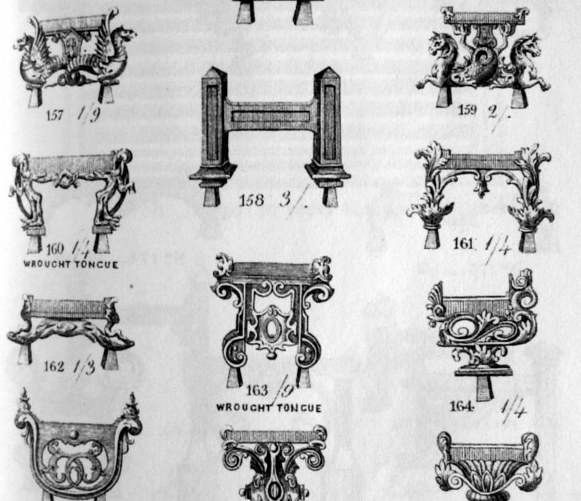 This blog has had a little theme lately:  looking at streets and sidewalks, walking on ice, and the transition between the street and the house – storm porches. These posts happened because the moment seemed right,  but really what I’ve been wanting to show you are my three pictures of boot scrapers.

Storm porches are adaptations to living in a northern land;  boot scrapers are evidence that our streets and sidewalks were once muddy (or worse). In the mid 19th century scrapers were often installed on a front step so you could scrap the muck off your boots before proceeding into the house.  Here are the specimens I’ve noticed.

This  scraper was at the corner of Morris and Queen (photo from the 70s , it has now disappeared). The step was sandstone (painted grey). The cast iron scraper would be secured in the stone with molten lead. Cast iron was the miracle material of the 19th century. All sorts of consumer goods were made of iron and available in catalogs.  A foundry in Birmingham England produced a catalog about 1850 that shows designs very similar to this scraper. Around the corner on Birmingham Street are two more scrapers. The catalog illustration is not identical but it gives an idea of the sort of detail that is concealed under layers of paint. And a plainer model found a few houses away, with catalog illustrations  of slightly more ornate models. Why are the only boot scrapers in this small area?  This is  Schmidtville, the area south of the business district of Spring Garden Road. The houses abut the sidewalk and often have a single stone step at the entrance: perfect location for a boot scraper. In other old residential areas there tended to be wooden steps.

How muddy were the streets?  Since the founding of Halifax, people have complained about the state of the streets. We cannot imagine how awful it was with dirt sidewalks and roads and little sanitation.

I looked for 19th century street photos  of Schmidtville  and the best that I could find is this picture of the school on Morris Street at the head of Birmingham Street. You can see that the sidewalk is just compacted dirt and that the road is “informal.”  Imagine it is a spring thaw and you will be thankful for your boot scraper. How common were boot scrapers?  My little sample of scrapers must have been just the tip of the muddy iceberg. Guess how many pages of boot scrapers there were in the catalog I’ve been showing. Twenty two pages  with about 15 examples a page. Boot scrapers were a definitively a thing.

I did a quick look at a couple of the best photo collections in the Nova Scotia Archives to see if scrapers could be identified.  I found enough to suggest they were not uncommon.

This one on Brunswick Street  is in front of a tiny temporary storm porch. Double whammy. Further down Brunswick Street is a house that still exists. There is clearly a scraper on the left and probably one on the right too. Cast iron is quite brittle so scrapers could be broken (maybe with a snow shovel).  I need to check to see if the socket is still there. And here is a scraper at a Dockyard building. And another pair also in the Dockyard. Many cities have boot scrapers in great numbers. Brussels is particularly proud of its boot scraper heritage. Not many scrapers may have survived here but I’m confident we cleaned our boots with the best of them. All the smoke from the chimneys reminds me that when I was growing up  people still burned coal and spread cinders on icy sidewalks. Why would we ever buy sand?