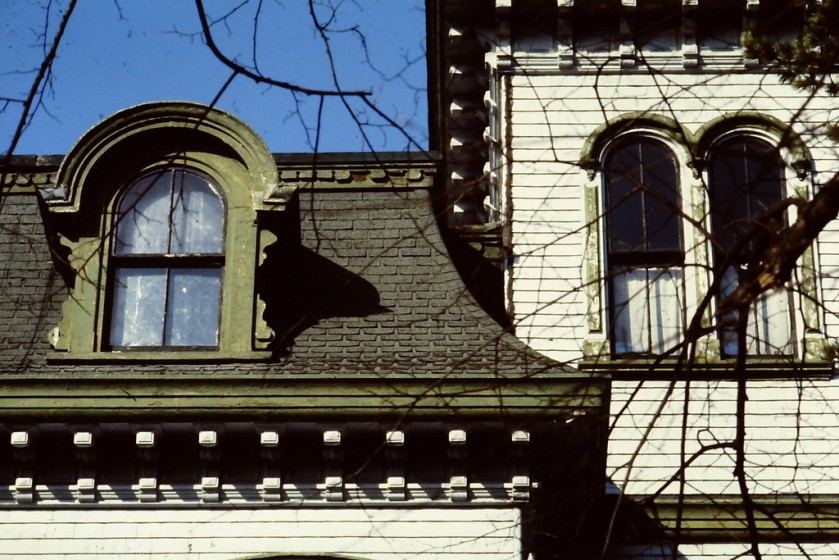 This New Year idea got me thinking about things that are gone (as gone as 2014). So I looked for some photos I’d taken of houses that were gone as in demolished. My photos tend to be south of Spring Garden because that is the area where I lived in the 70s and 80s, and where buildings were being torn down because that was where new development was taking place.

The most impressive home in my collection is the Mitchell House on Tower Road near Inglis.  It sat on a large property that is now filled with housing I can’t visualize at the moment. This photo appears to have been taken in 1975 (too bad I cut off the tower). 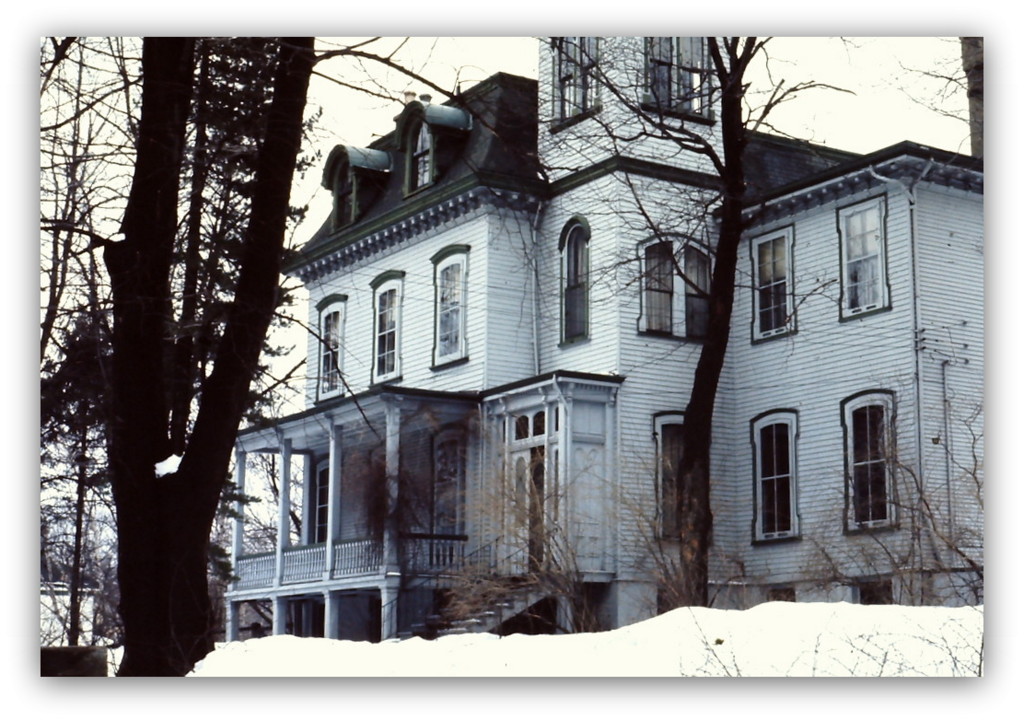 This is a detail of a dormer and  the tower windows in 1984 not too long before it came down.  Some lost Halloween potential. 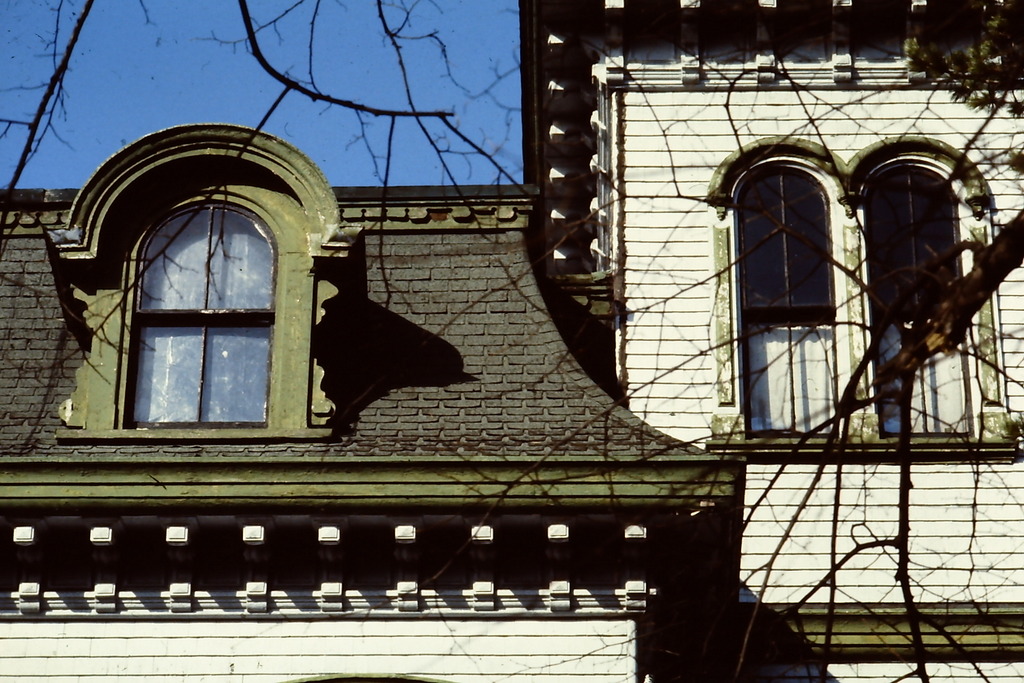 Many of the buildings in this group were painted grey.  It made sense to paint urban houses drab colours when smoky coal was the common fuel. This big Italianate style villa was on the south side of  Morris Street up from Barrington.  Photographed in 1977. 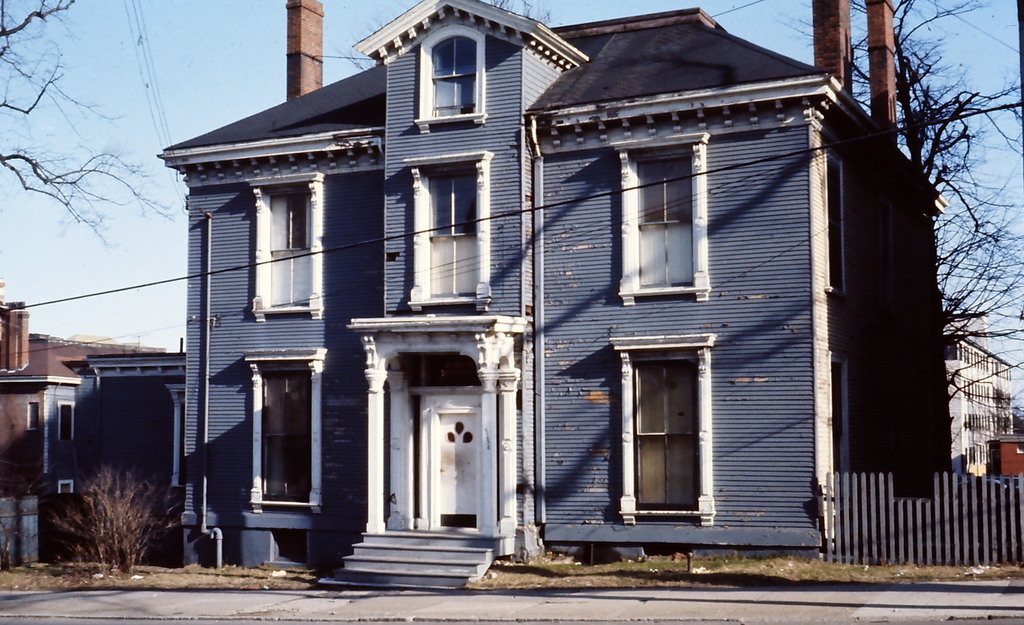 Just down the block on Morris at Hollis were these twins. At the far right is a sliver of the building that is currently the Wired Monk. These buildings would have been made of brick that was always intended to be covered with “stucco.” The finish coat of stucco was marked to give the impression the building was made of cut sandstone. This photo is 1977 and the whole block is now occupied by the brick building with the bright roof.  It is a fine building,  maybe some day there will be a reason to give it some curb appeal. 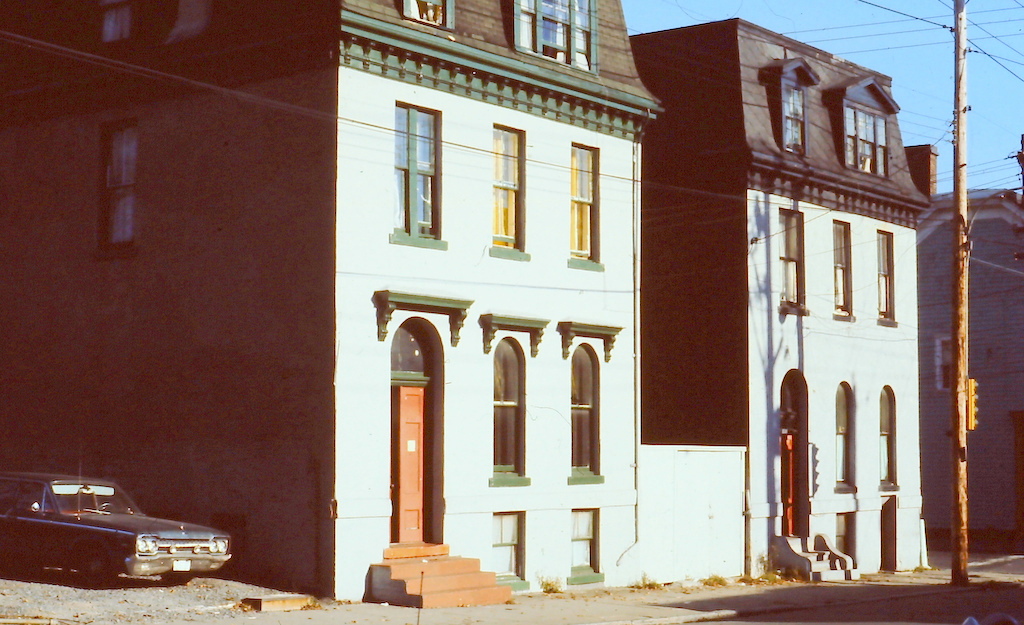 This great grey at the corner of Barrington and Tobin was a residence for Catholic women who came to the city to work (or something like that). It had been an important private residence and had a big back garden behind a high stone wall.  The storm porch is a common Halifax addition. Another sweet detail you can barely see are tiny Ionic capitals on the ground floor window frames. The photo is 1977 and now there is an apartment building there. 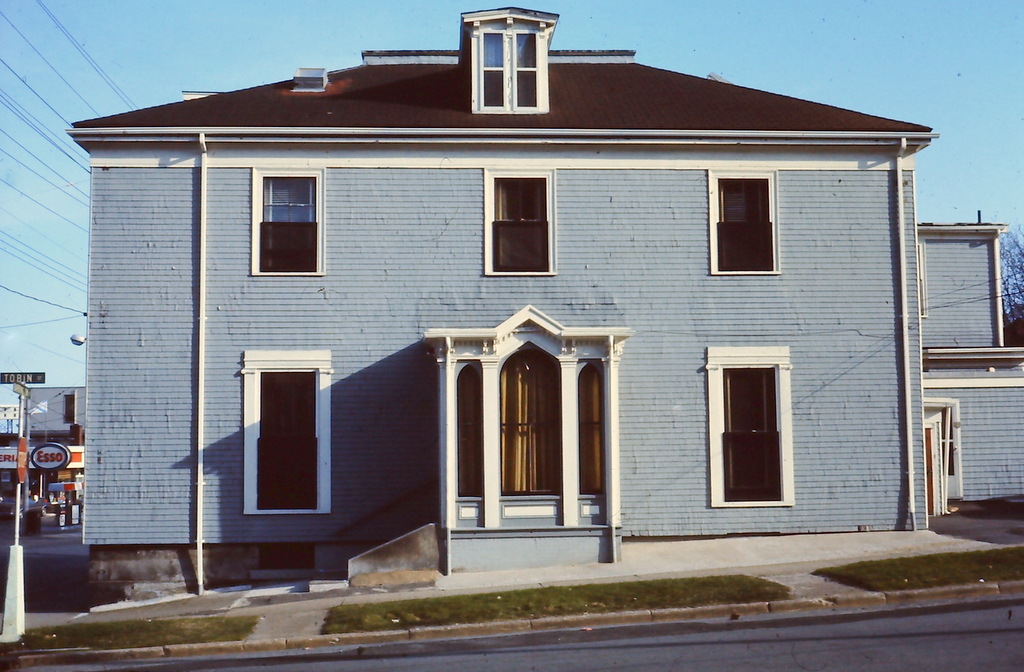 I don’t recall any history of this building but it felt early (pre 1850s). Imagine if all the windows had 6 over 6 sashes like those that survived in the dormers.  It was at the corner of Dresden and Clyde, facing the side of the NSLC. To the far left there is a glimpse of the statue on the the side of the Infirmary.  This photo is 1978 and there are condos or apartments there now. 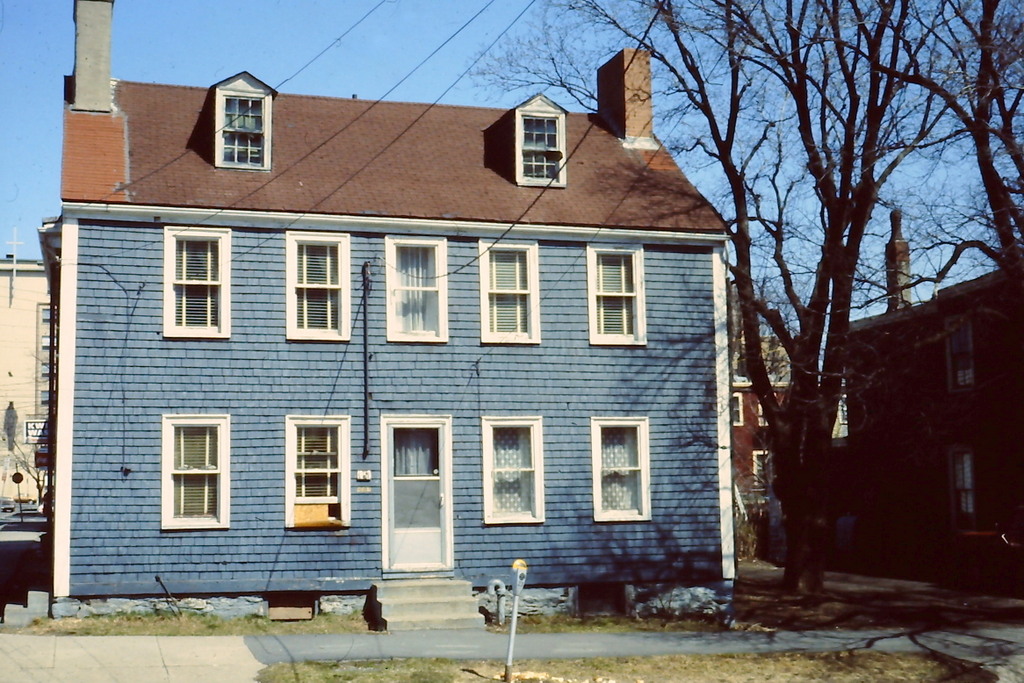 This photo from the same time shows the end of the grey building (great roofline  with very little overhang). The brown house is still there and has been incorporated into the new apartment complex. 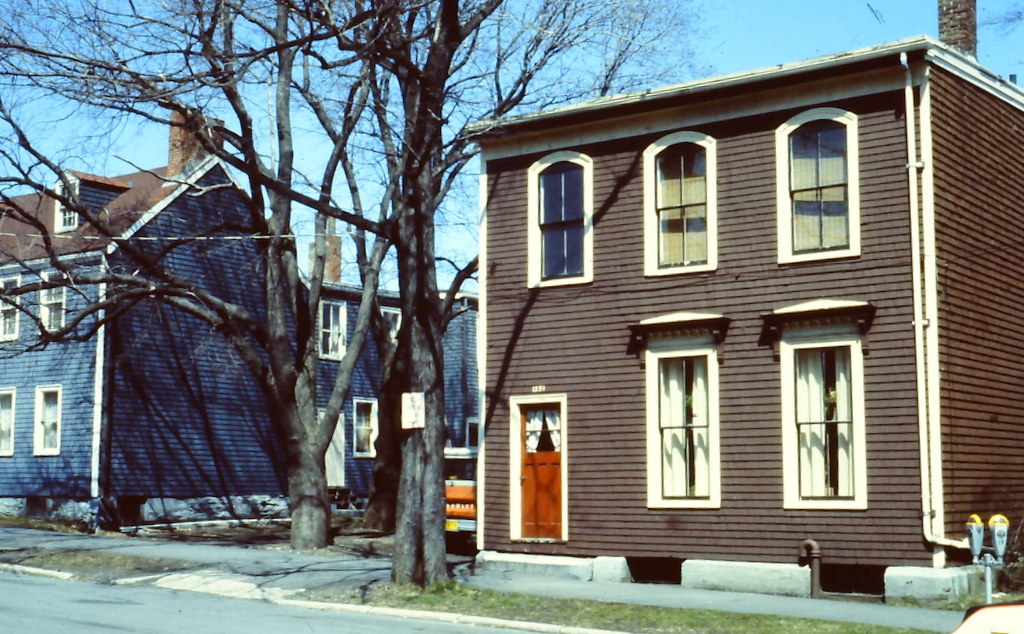 Up Dresden Row on the other side of Spring Garden, more or less where Pete’s is, was a tidy house with a cast iron fence that I photographed in 1974 and 1977.  Unfortunately I did not photograph the whole house nor do I remember what it looked like.  As the principal at QEH used to say: a word to the wise should be sufficient. 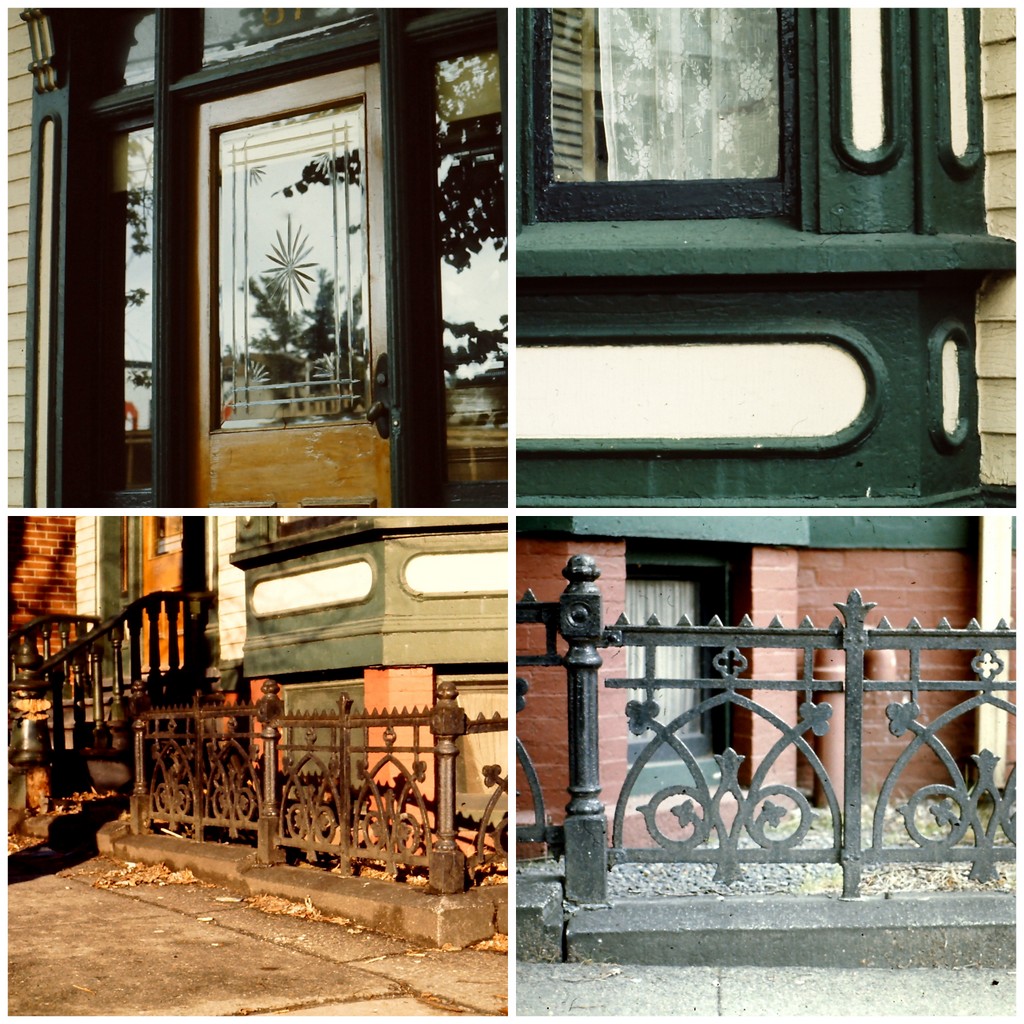 In the 1980s we lived on Inglis Street and this view is from the top floor of our Victorian townhouse looking over the backyards of houses on Victoria Road.  The yellow house was classic Halifax with the wonderful row of five-sided dormers. The building was taken down and completely rebuilt a few years later. 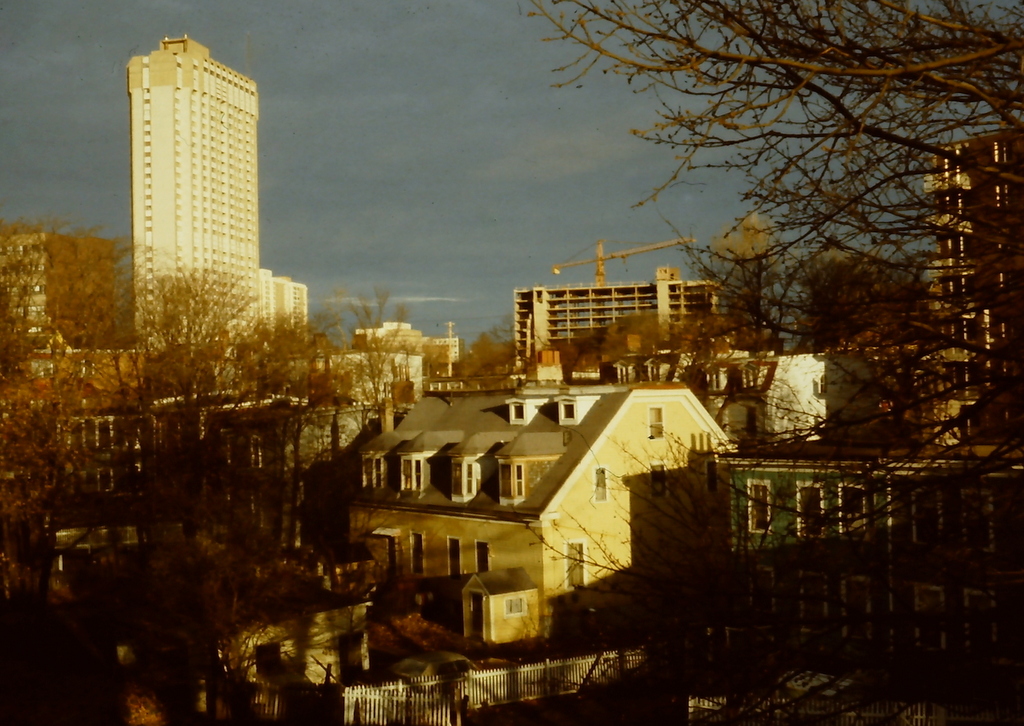 This view also demonstrates how the area was changing: the building under construction is the seniors residence at Queen and South, Fenwick towers over Park Vic in the distance, and to the far right is the tip of the long wall of South Point apartments. Thirty or forty years after they were built the city still does not have much affection for these towers. But in 2015 all of our new buildings will be designed with intelligence and wit and will be constructed with good materials.  It’s going to be so much fun.