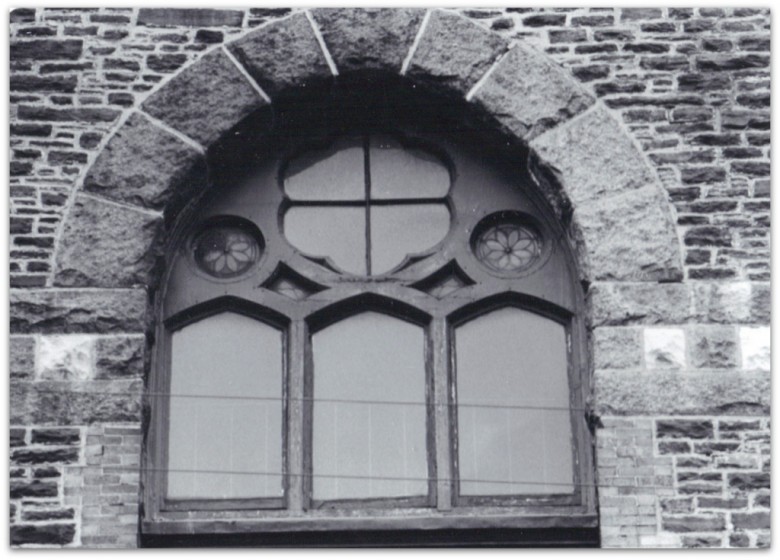 Many of you will not be aware of St Paul’s Parish Hall that once was a strong presence on Argyle Street. Bits of the building survive, buried in the facade of the office building immediately south of the Auction House bar. (This is a screenshot from Street View.)

When you see what the Hall looked like it is clear that the fragments don’t really give you much of a sense of the original building. As you can imagine there was some discussion about preserving the Hall. My memory is that saving more of the facade had been a option but the stonework was declared  to be in poor condition. The building was designed by a prolific local architect, William Critchlow Harris (1854 – 1913), who designed many church buildings in the region. You can see on the gable that the Hall dates from 1902. Breaking up the “AD” is a nice Arts and Crafts touch. The typography over the door is also fun:  periods separate the words; the apostrophe mortised into the L. I took these snapshots around 1978 knowing that the building was going to be taken down.  At that time the building was about 75 years old and felt relatively new compared to other threatened buildings. In Nova Scotia there were few examples of this heavy style of Gothic architecture and our eyes had not yet embraced its charms. Perhaps best thing the building offered the city was the gift of excitement to the skyline.  I always liked how this image showed the towers of the Parish Hall framing the cupola of their church (which was 150 years older). Looking at the broader view you realize how much energy the asymmetric twin towers of the Hall brought to the cityscape (this photo is perhaps 1966).  By 1978 the new towers were dominating the skyline and the day of the Parish Hall had passed.