In several Halifax Examiner posts ( December 5 and January 9) Tim Bousquet has commented on a favourite episode of the 99% Invisible podcast. It tells how the automobile industry created the myth of the reckless pedestrian and branded streets as places where people don’t belong.

“For almost the entire history of streets — 8,000 years or so — they were the domain of pedestrians, people walking. There weren’t rules. People could walk across the street at any point, could wander down the middle of the street, could pass on the right or left, whatever. It’s true that with heavy horse traffic and poor drainage the streets could be a terrible mess and so elevated sidewalks were created, but nonetheless there were no laws against pedestrians using the streets however they wanted to, nor any reason for such laws. Nineteenth century prints showing city streets depict people walking in the streets, socializing in the middle of the street, using them as people have for thousands of years before.”

I thought you would enjoy seeing some photos of downtown Halifax that illustrate how our streets were once used.  These are from the wonderful collections available on the Public Archives of Nova Scotia site.

Many 19th century  photos, like this one of Barrington Street  c1870, show that businesses stored material on sidewalks and in the street. The muddy state of streets was a constant complaint. 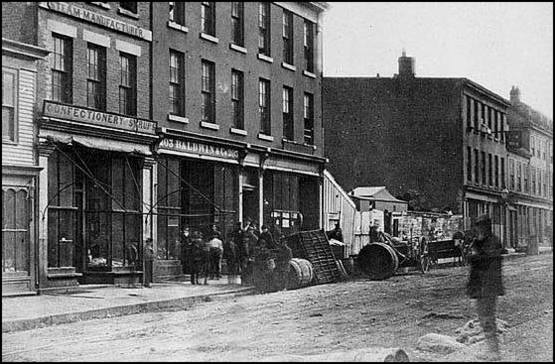 The view up George St in 1879 shows people streaming to the market building to the left.  Because of the long exposure people crossing the street are a series of blurs.  The ox carts may have stopped for the photo or they might just be stopped for a chat. 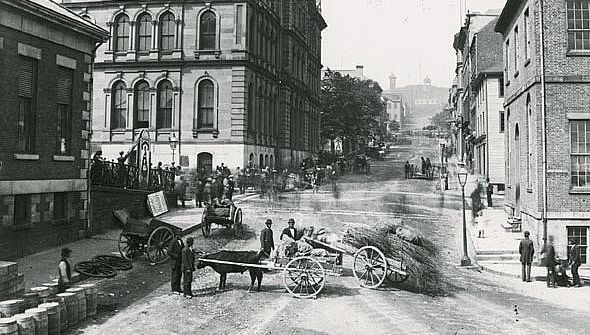 Here a couple stroll across the intersection of Granville and Duke with nothing to fear c1890.  Buddy on the left is using the paved crosswalk. 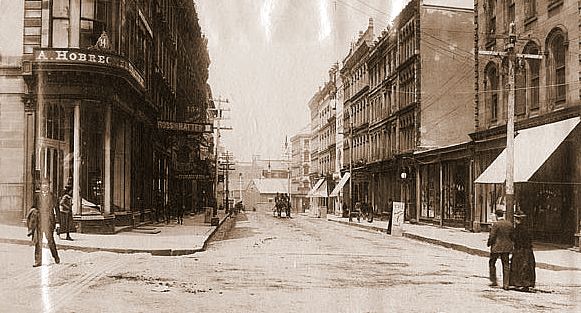 Here is a good 1890 view of a crosswalk paved with beach cobbles and edged perhaps with granite. The photo is looking south on Barrington. The street to the right ran in front of St Paul’s church and was incorporated into the Grand Parade. A horse-drawn tram approaches on rails in the middle of the street.

This 1895 image of Granville and George really captures the spirit of street life. There is clearly some posing for the camera but folks do appear to be very comfortable standing in the roadway and the gents driving the wagon seem unconcerned by all the pedestrians.

Here is how Barrington Street changes with cars. By 1945 the size of the vehicles plus parking turns what had appeared to be a generous space in the 19th century into a constricted corridor. Interesting to see some people still jaywalking . 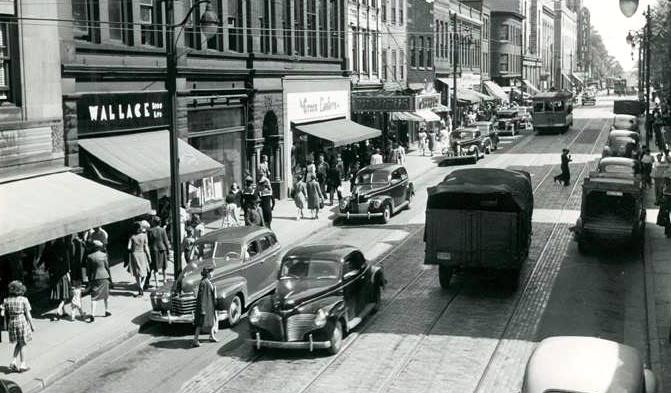 99% Invisible linked to an amazing motion picture shot from the front of a tram car in San Francisco in 1906.  I find the the long version of this film absolutely mesmerizing as people and vehicles share the road in an intricate ballet. Once upon a time Halifax would have performed a miniature version of this dance.

DEAR SIR – Allow me, through your columns, to call the attention of the Board of Works to the present undesirable state of the streets, more especially of the crossings- I say the Board of Works because every one else has probably noticed it for themselves; unluckily for myself as I am worn rather long just now I cannot help gathering the superfluous mud around me.