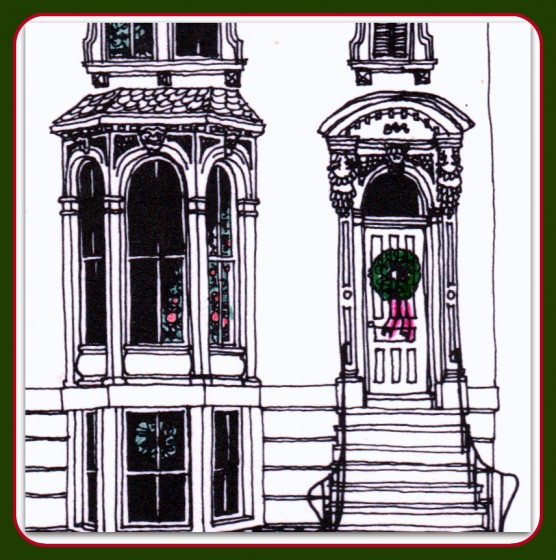 We are beginning to excavate the wicker picnic hampers stuffed with memories of Christmases past. Uncovered was this little collection of Christmas card survivals – I’ll let you judge if they deserved to live another season.

Christmas cards were once a bigger deal (mail was a bigger deal). These paper labels were distributed by the Post Office in the 60s. Long before the postal code, you sorted your cards, in town or out of town, and tied them in bundles with the appropriate label. Their bold modern design has kept these labels in the save pile. I have no idea what it costs to send a card today – 50 cents, 60 cents?

In the 50s and 60s there were jokes about not very good homemade cards. There were also good cards like these later-60s original prints made and sent by Donald MacKay, who was principal of the College of Art until 1966. 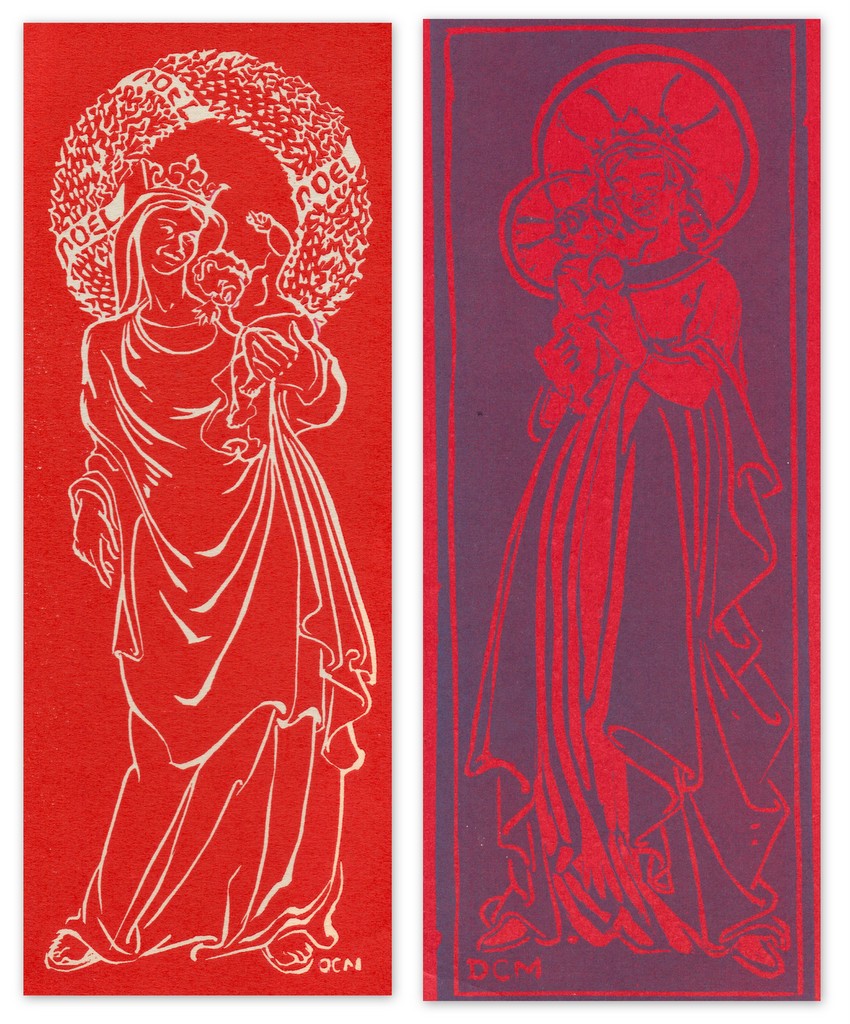 An example of how the world was aesthetically changing: here is a greeting from the Nova Scotia College of Art and Design, from the mid 1970s I believe. It’s big (21 cm square), lots of white space and keep it white, silver border and type. 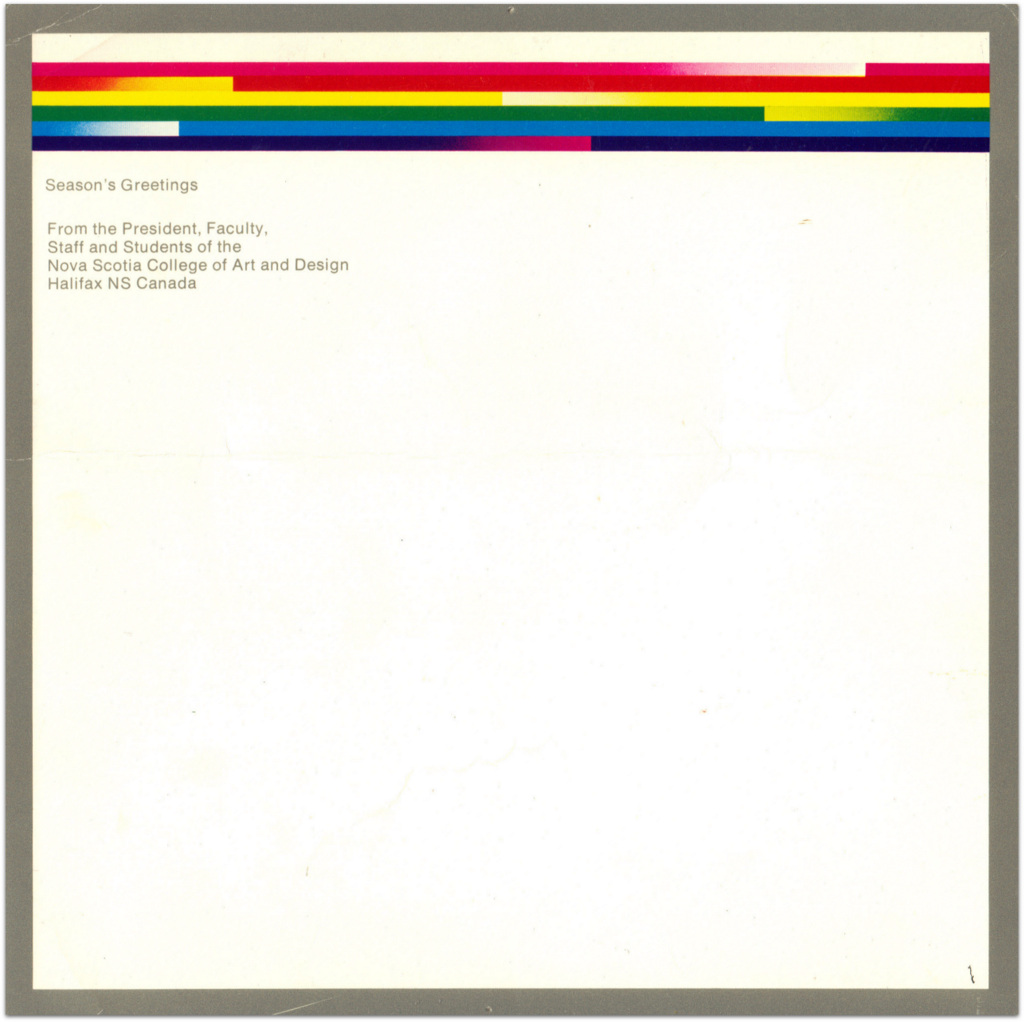 I hope that someone has saved cards from our local design firms, I only have a couple. This smart three-fold card was sent by GDA (Graphic Design Associates). It references the postponement of metrification until 1984. The gray type and light green rules are hard to capture on the screen.  The top edge is marked in inches and the bottom in centimeters.

The print gets really tiny on this complex folded 1989 card from the Communications Design Group.  (I’ve added labels in fancy type so as not to get confused with the designer’s sans serif). 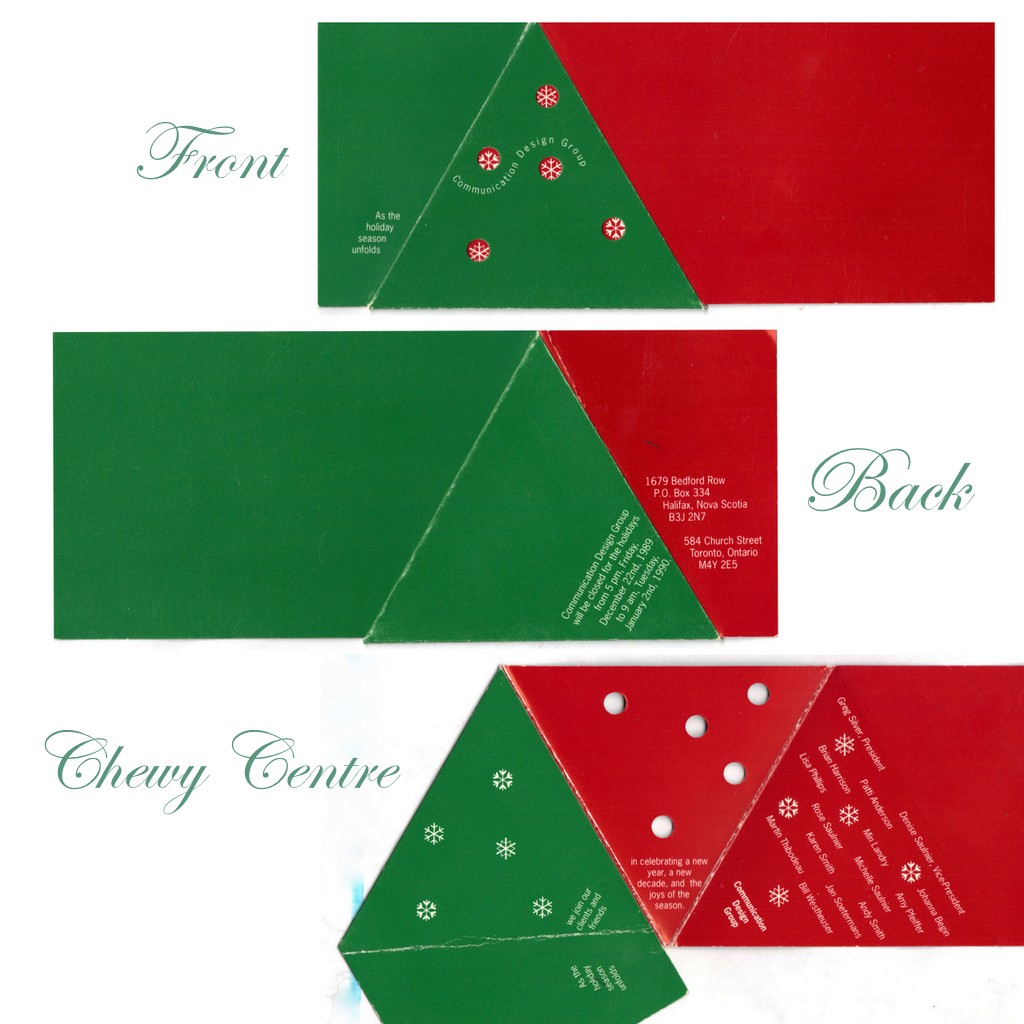 The tradition of great cards with tiny type endures into this century.  Here a selection of geometric stars and instructions for drawing them on architect Peter Henry’s card.  All the instructions begin with “vert AB”  with B at the point of a plumb bob. Sweet! I’ve collaged the card on top of a detail. 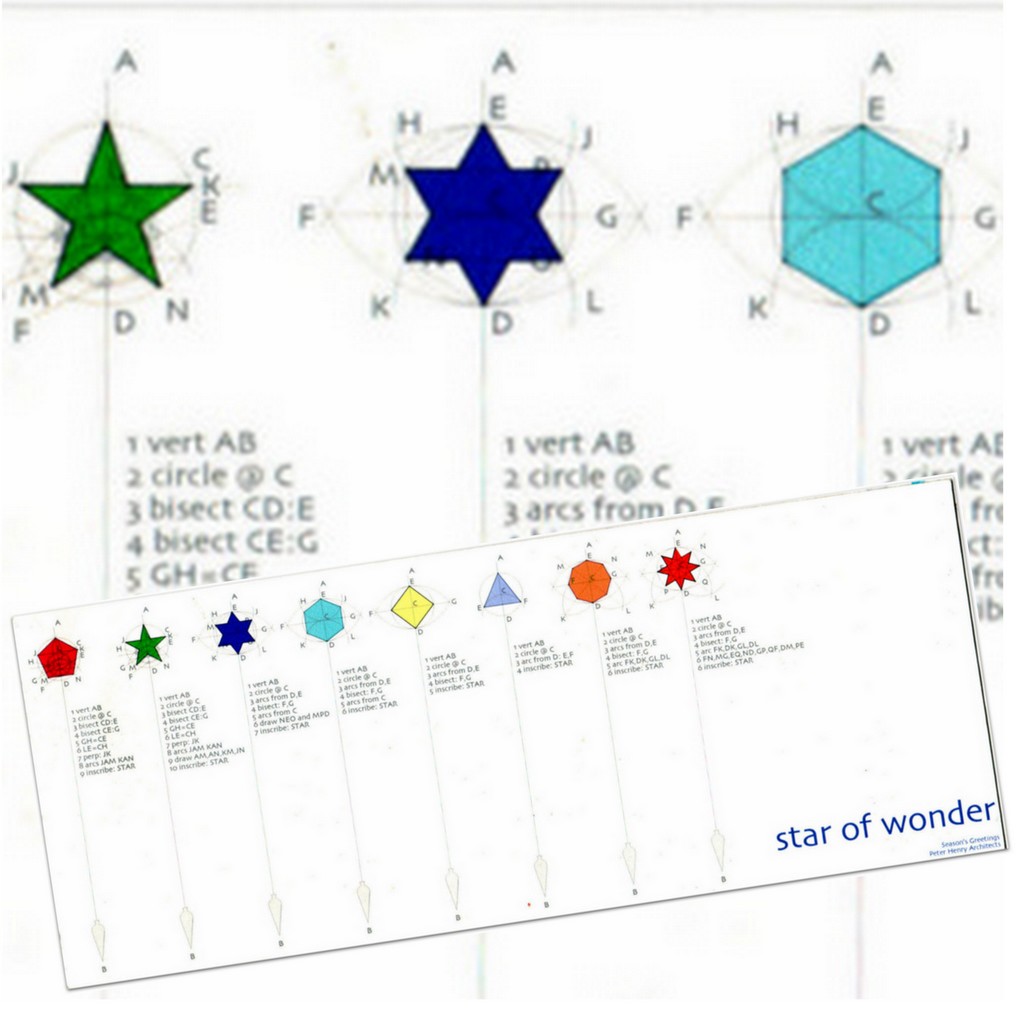 An invitation to a party at architects Lydon Lynch in 1979. Spot colour achieved with an adhesive green dot. 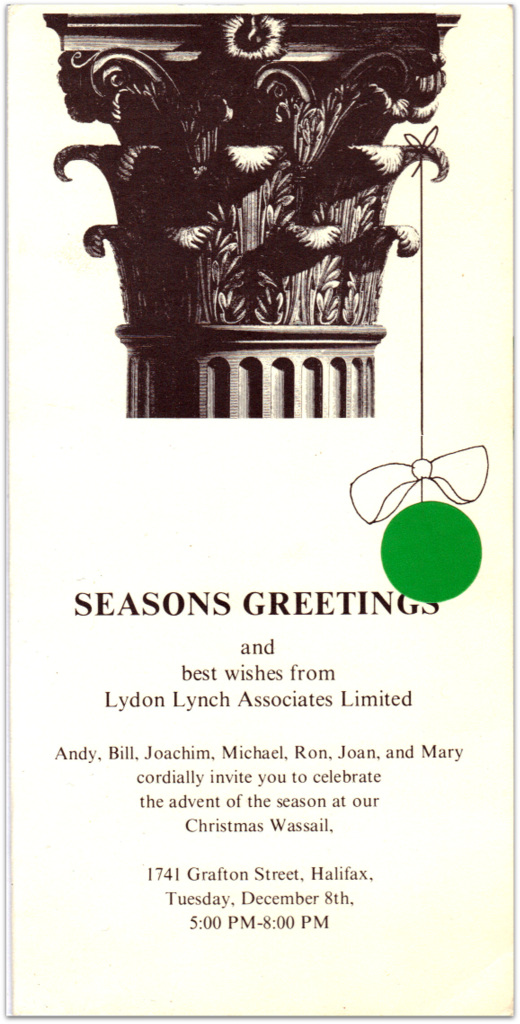 Does our design community still produce smart seasonal greetings in one form or another?  I would love to see them collected together somewhere.  I wonder who the best client is – they would have them all!

We have the Lydon Lynch party invitation because we co-owned a couple of houses with Andy Lynch and family. Andy draws buildings with ease and charm so there are great renderings of our homes. The house on Smith Street, owned with Sheila, had a card designed to fit around a liquor bottle.  I styled it today with a bottle of gin but I’m sure in 1977 it was intended for a bottle of Johnnie Walker. 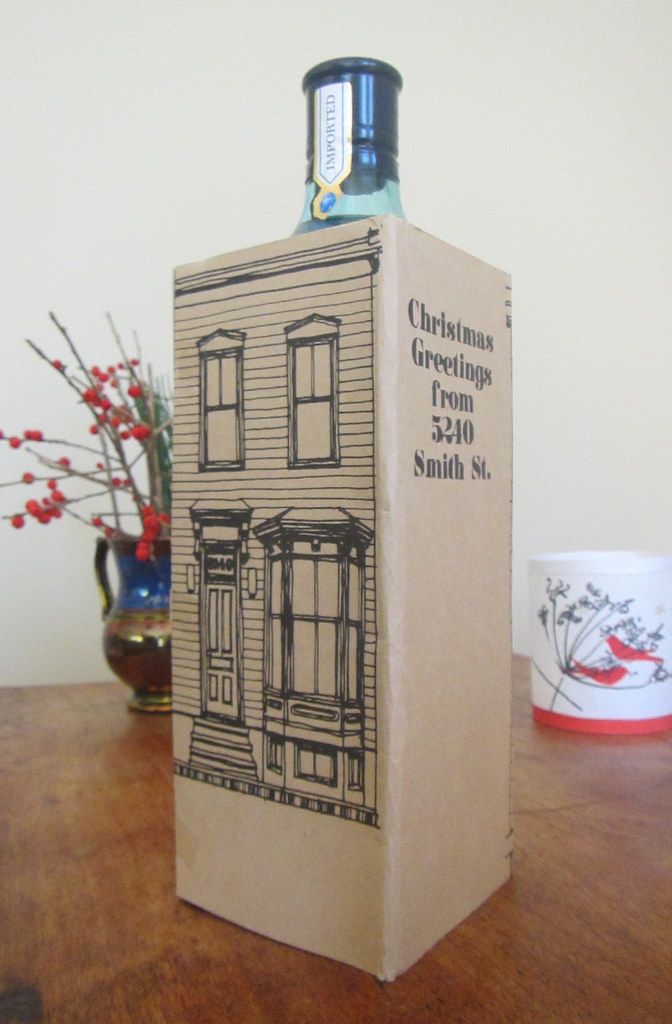 When we all moved to Inglis Street in 1979, Andy did this little rendering of the house (Sheila and I lived on the top two floors). The touches of colour are magic marker, and on this version I went crazy with my rubber stamps.