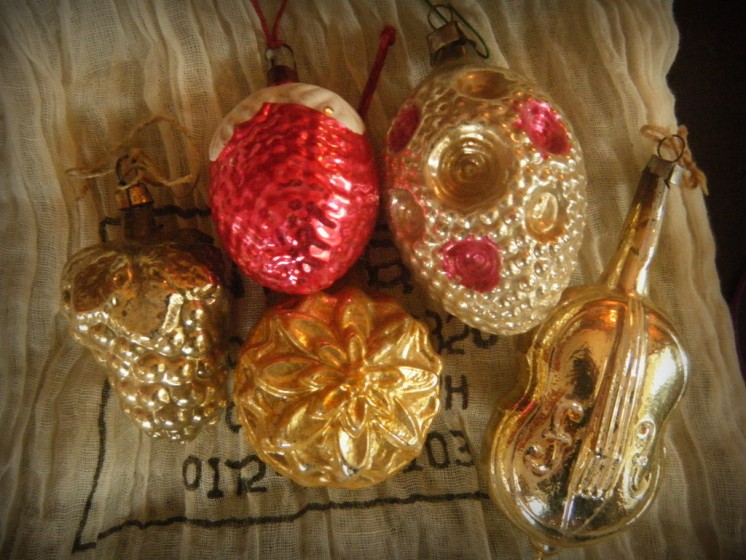 I sense that many people are fond of Christmas trees. On Twitter they posted pictures of their decorated trees at the first of the month and I remember last year trees lingered far into January. Folks from other cultures must be charmed when they observe our ritual of bringing a tree inside and decorating it with treasured ornaments. The custom was introduced to Halifax in the late 1840s. You might want to make a little pilgrimage to where it all began at the western end of Coburg Road.

Photographing the tree has been popular since people were able to photograph indoors. This  is a picture of my grandparents’ tree in Bridgetown about 1912. I suspect we still use a couple of ornaments that hung on this tree. Displaying the loot appears to be an established practice. 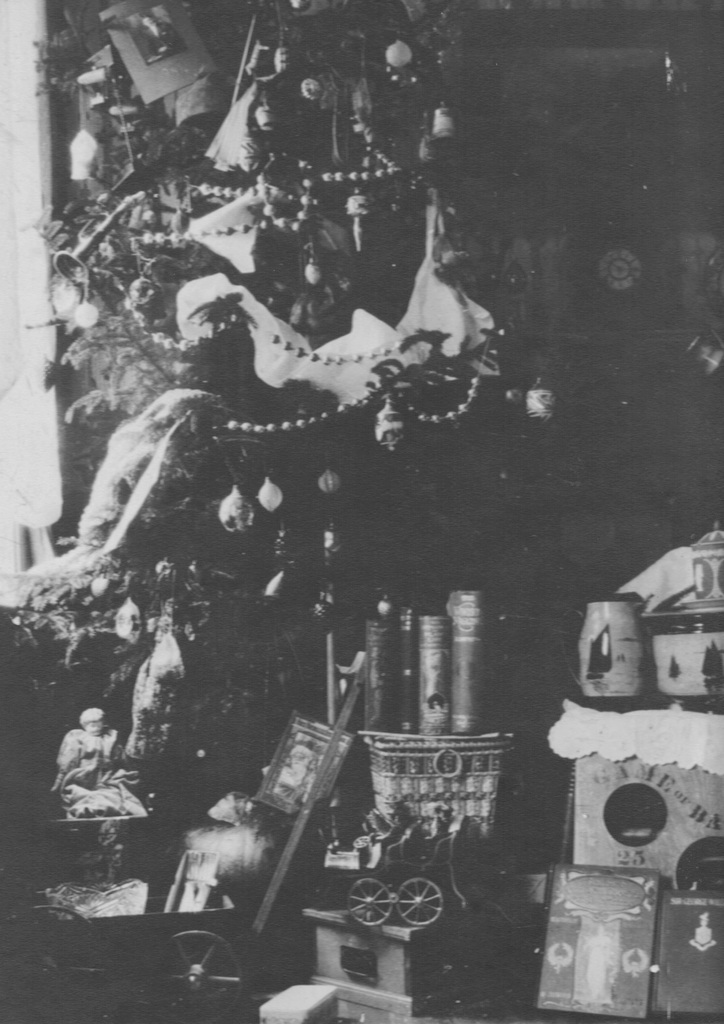 Here are some older glass ornaments that may date back to this time. There are fewer every year. 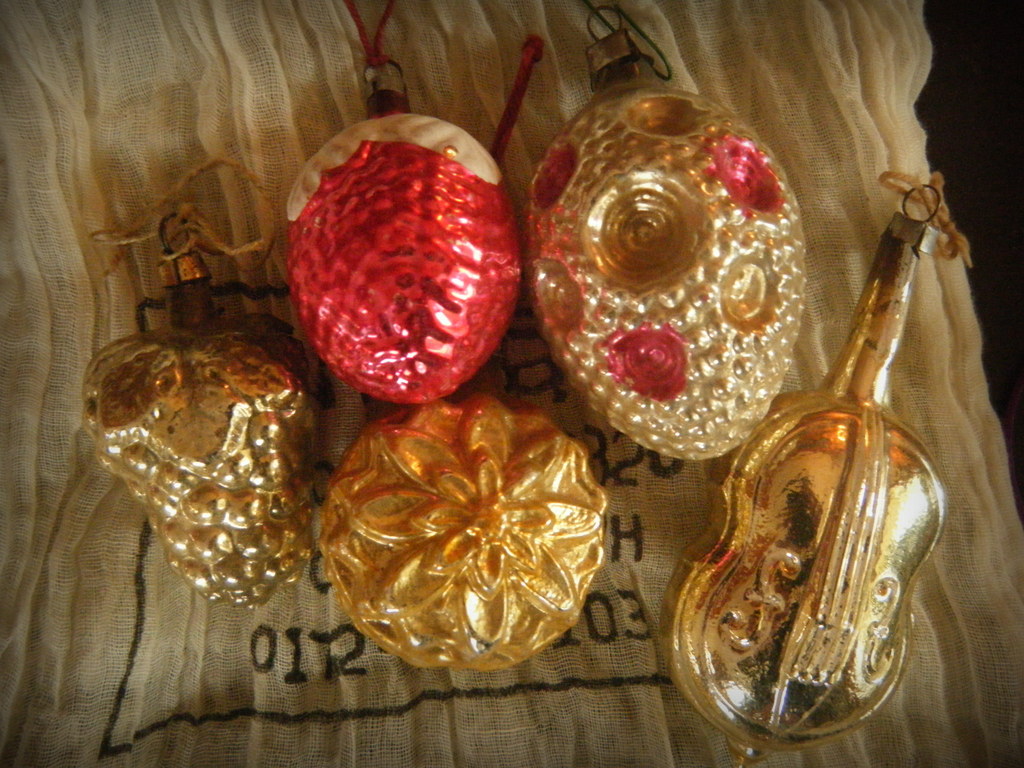 When do-das are acquired over several lifetimes they can trigger memories of sagas of Homeric scale (without the drama). When we hang ornaments it’s a constant stream of “where did we get the glass pickle?” and “remember the woman who gave us the crocheted snowflakes.”

Even the packaging materials are rich in meaning. On one box Uncle Sam is shaking hands with Santa Claus. I suspect this is World War II vintage. Germany had been the big producer of glass decorations and the US had to gear up to produce their own bright shiny balls. We rarely hang any of the Diamond Ray Jeweled Icicles but the graphic design of their package always brings joy. 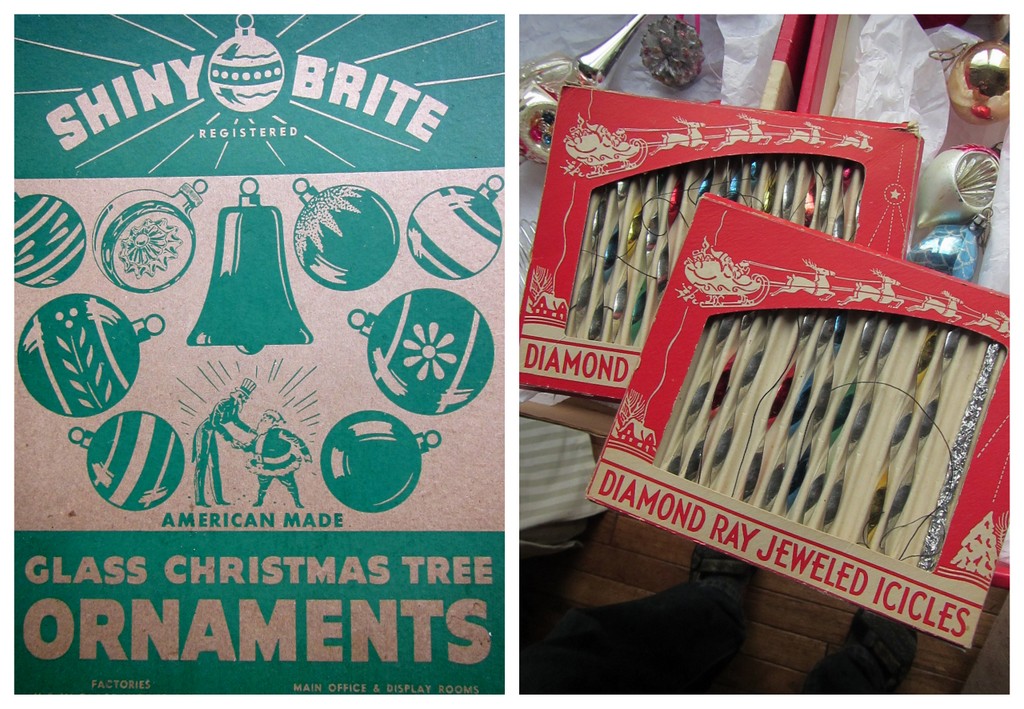 There was a moment when the Evangeline brand egg carton became as interesting as the ornaments it contained. 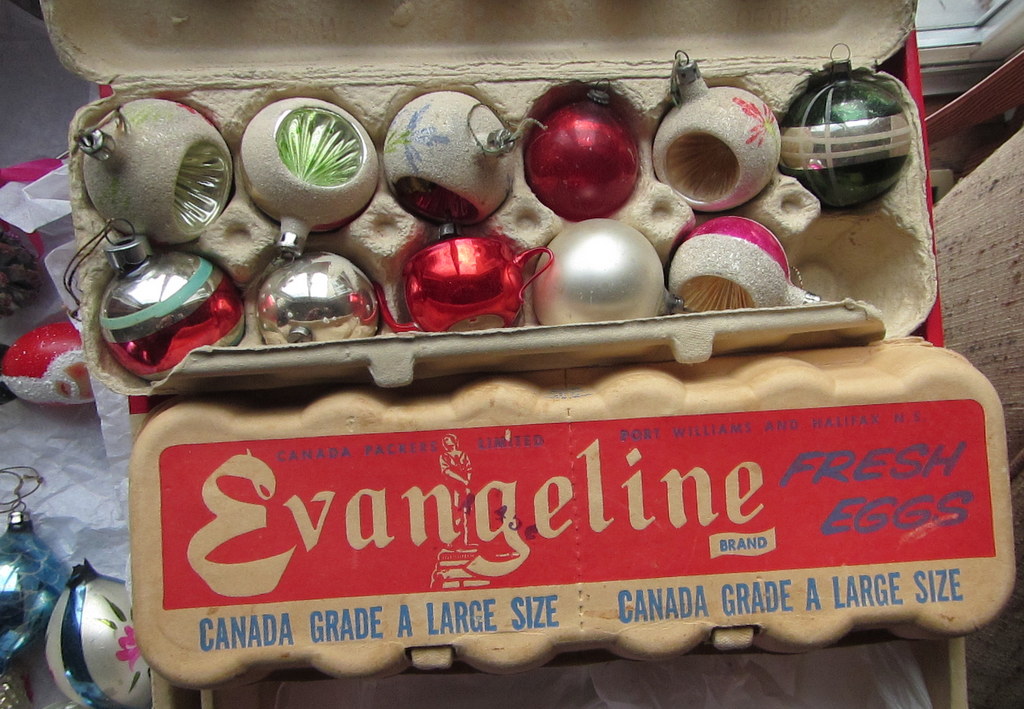 Also with the Christmas stuff is an envelope of snapshots of our trees and decorations. These are pre-digital and date back to the late 80s. I scanned some of them this year and they demonstrate several themes in how we live. The first four pictures were in our high ceiling-ed Victorian-era apartment on Inglis Street. I’m amused that the trees are in 3 different locations  in the living room and that the art on the wall moves every year. Future photo historians would have fun with that. 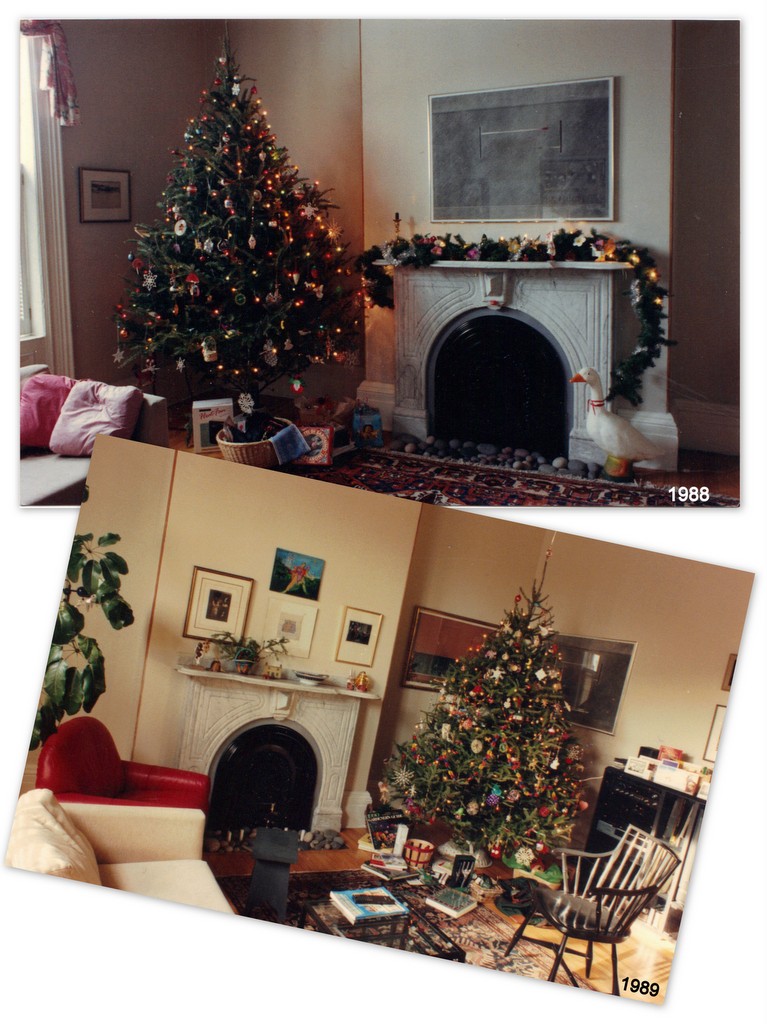 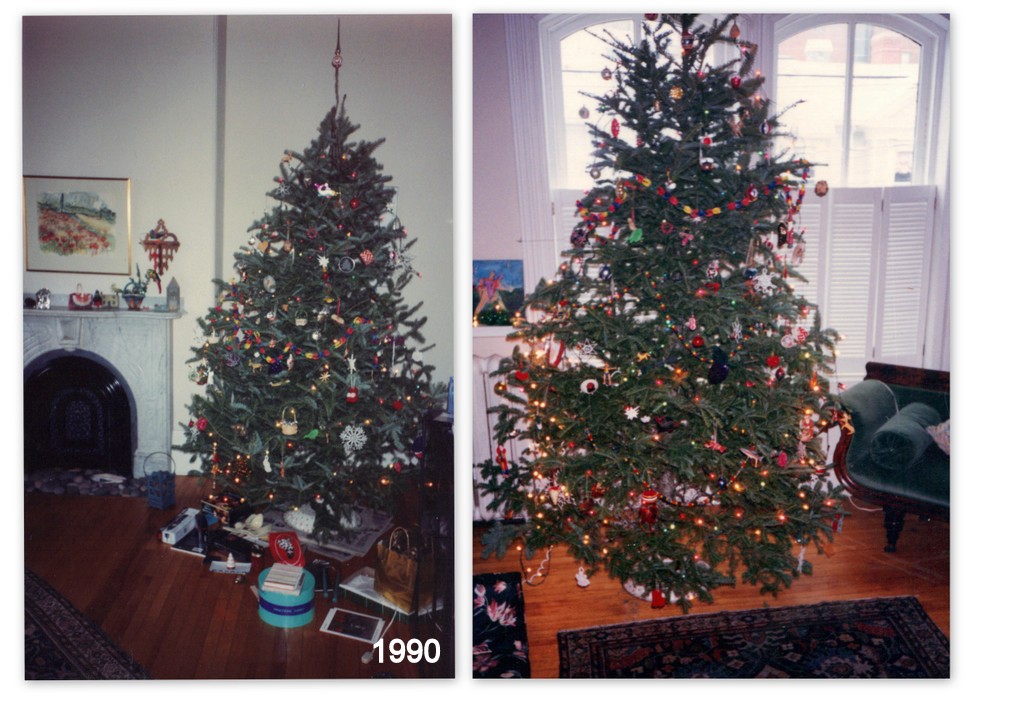 When we moved out to the cove 20+ years ago, spaces were smaller and trees were sometimes gathered from the nearby landscape.  And no matter what the tree, it is always “the best we’ve ever had.” 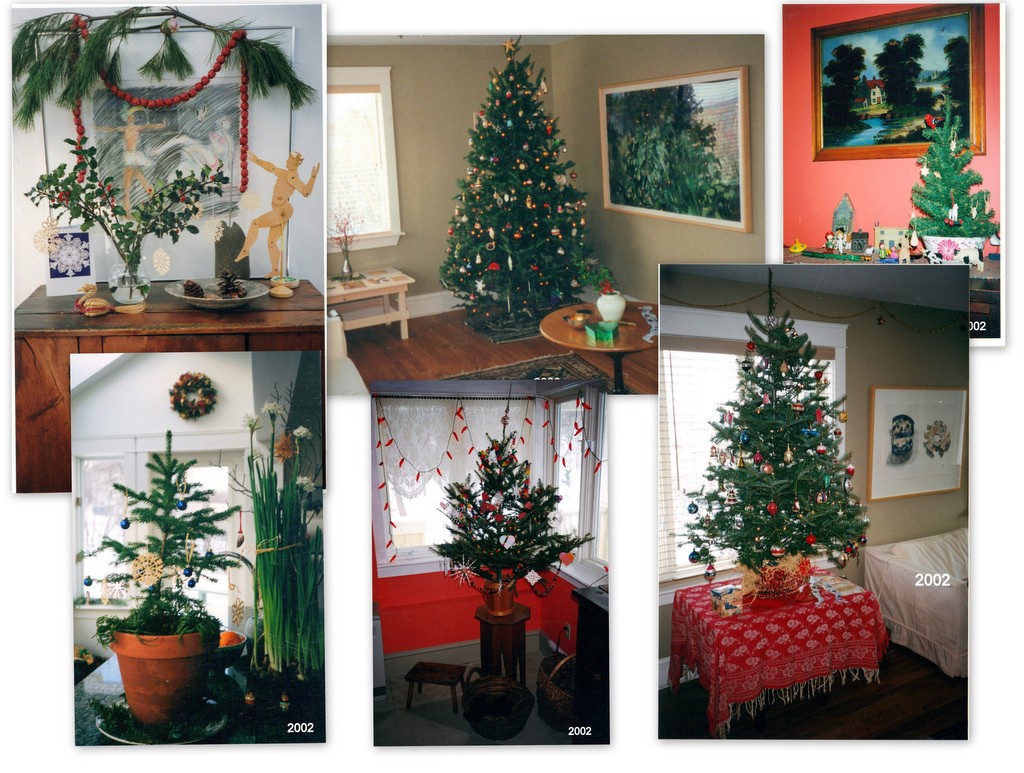 There was also a photo of the late Lux helping decorate a tree while purring violently and drooling. 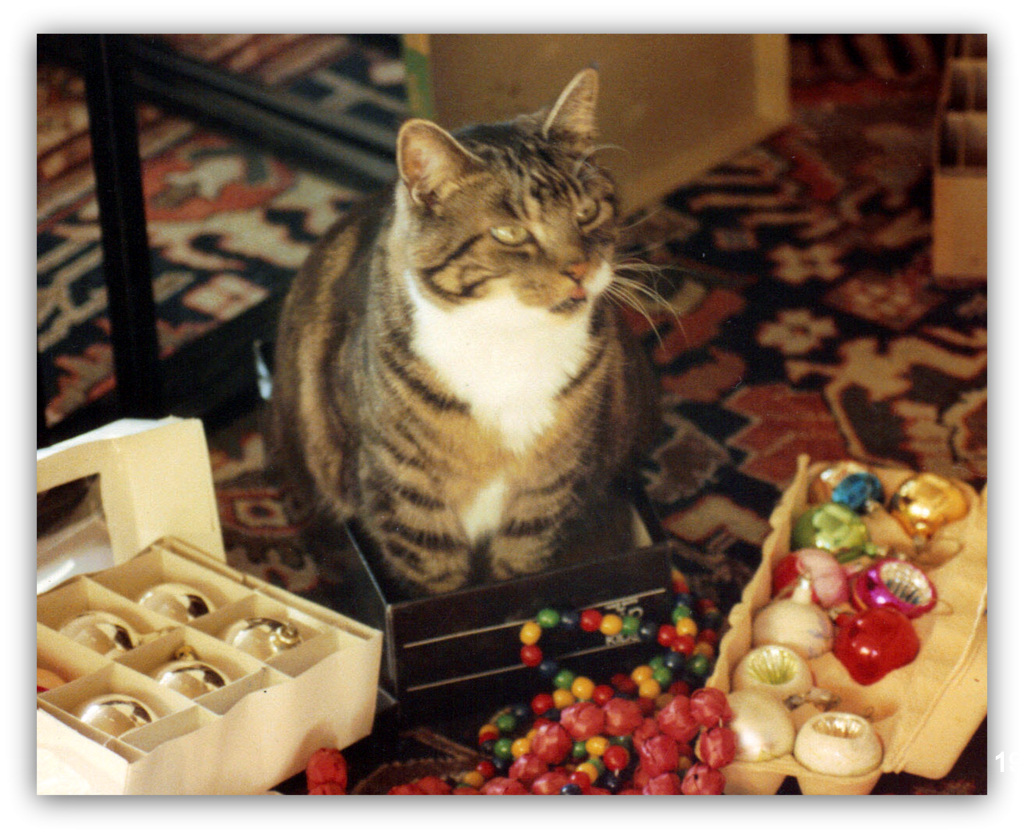 I hope you all have people and things you can enjoy this season. Is it clear I’ve had fun this year noticing the world around me? I have noticed you and am so happy to have your company.

In the next cove, there was a bonfire on the Solstice to encourage the sun to return to the North. I’m almost certain that it worked. 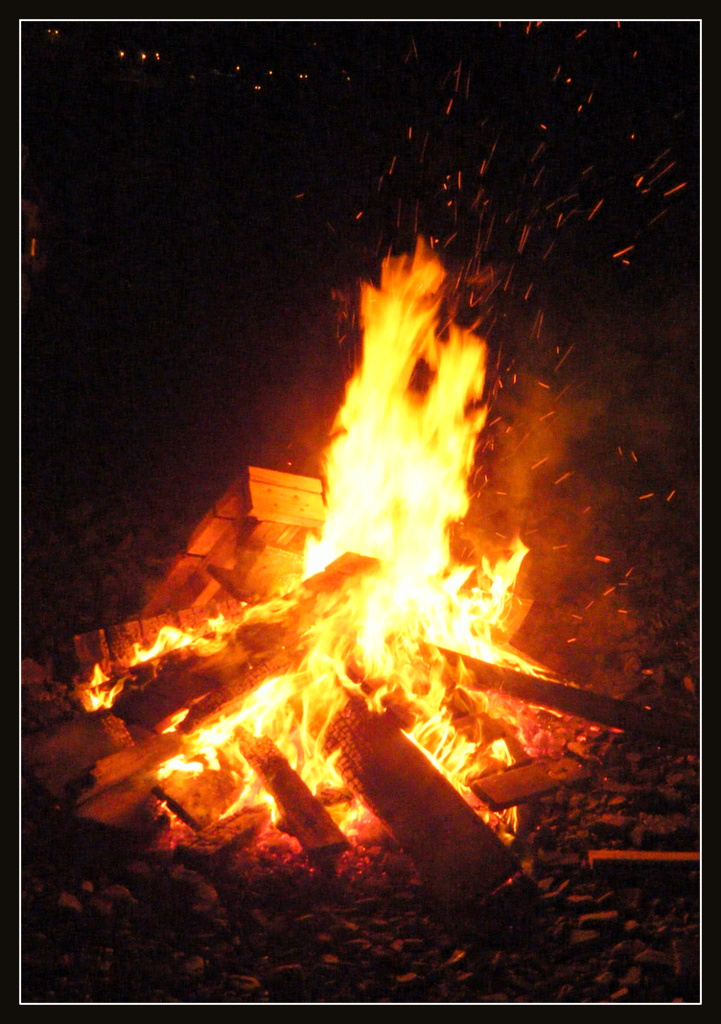