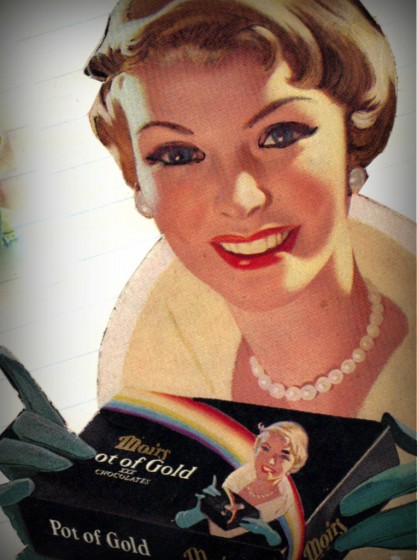 If you are not following Small History NS ( @smallhistory ) on Twitter you are missing out on a treat. Everyday there are stories that appeared in old newspapers from around the province. It is run by an academic researcher who shares some of the lovely stuff she spends all day reading but can’t use directly in her work.

I like that she is tweeting stories on the calendar day they appeared. So on December 18 she posted a fun advertisement from Canso on December 18, 1908.  “Santa is King” as a slogan might get some blowback today. 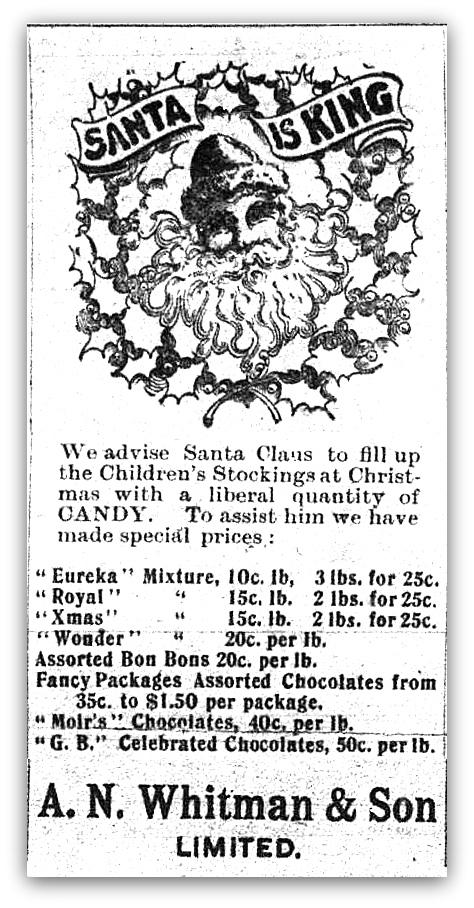 Often at Christmas time there are stories in the media about the last of our old candy companies. I always enjoy hearing about Robertson’s in Truro who make what we knew as barley candy and others called shapes or clear toys. These are clear sugar cast in traditional moulds  (my childhood memory is you could get very sticky and cut your mouth on sharp edges).

In the 70s and 80s  I saved a few local candy labels, not because they were particularly pretty, but because they were the work of small printers for small companies.  Here is a simple Robertson’s example after metrification and content requirements.

A little more interesting are these bag labels from the Yarmouth Candy Company. I guess they were printed with old handset type. 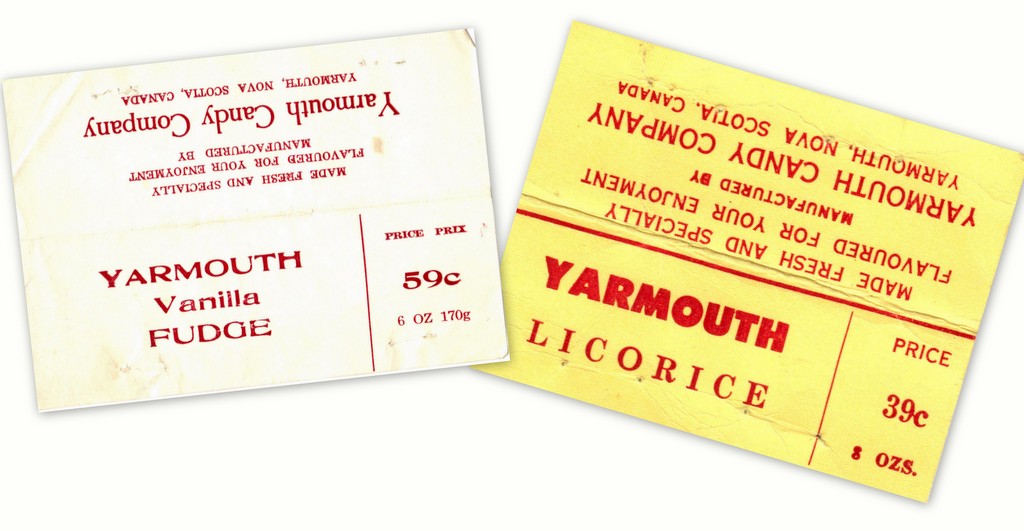 When I checked to make sure the company no longer existed (gone), I saw that a few years ago the Yarmouth County Museum produced an exhibit on local candy companies. There had been nine candy companies in Yarmouth between 1877 and the 1930s.

One of my favourite  local, traditional confections is maple cream.  We get it at the Seaport Market wrapped in parchment paper. Here you can compare a label from the 70s  (wonderful refined classic type border) with the present label . 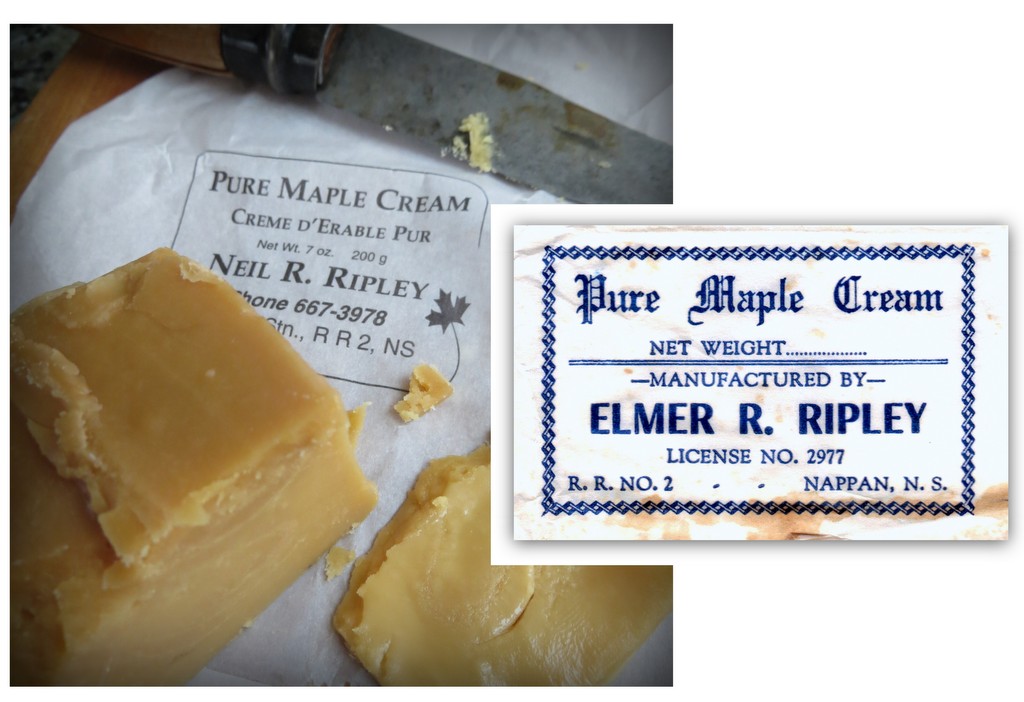 In the ad from Canso they mention Moir’s chocolates.  Moir’s was huge,  a totally different scale from these small  businesses.  Moirs had a long history of sophisticated package design but their star was this lady holding a Pot of Gold (and holding a smaller package and a smaller). 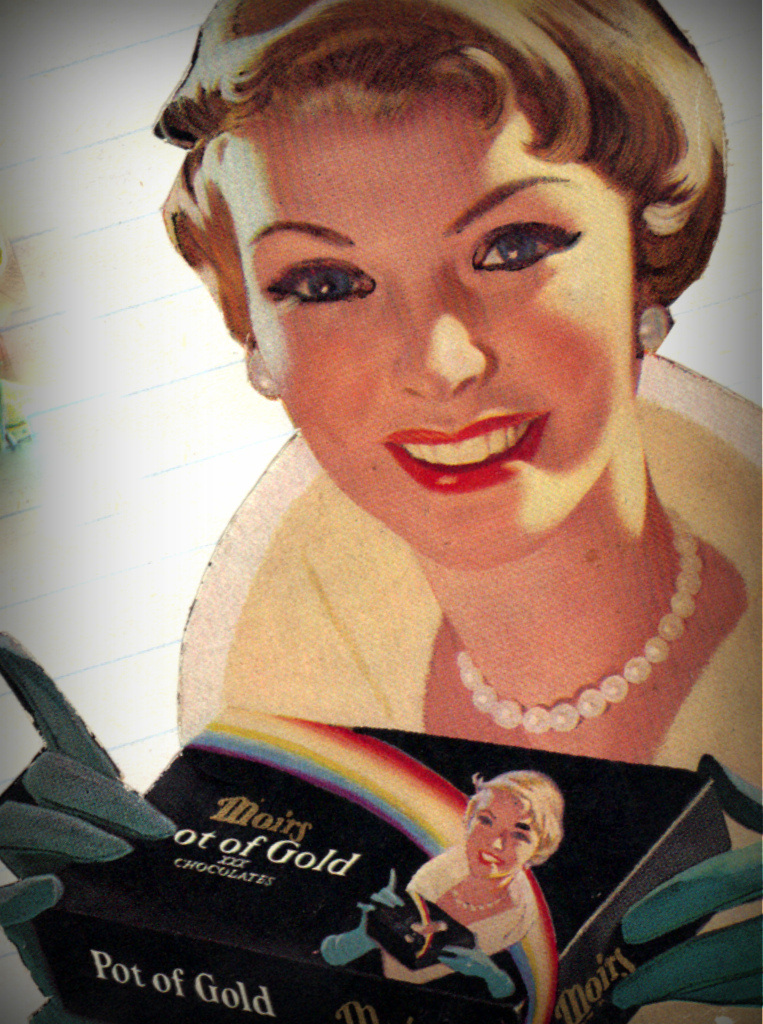 It is hard to imagine big industries downtown today but in the 50s and 60s Moirs was still beside the Grand Parade where the World Trade and Convention Centre is.  On very special days the fragrance of Moir’s chocolate would mingle with the aroma of salt cod drying on the roof of the A.M. Smith fish plant (the Maritime Museum site).  Special indeed.