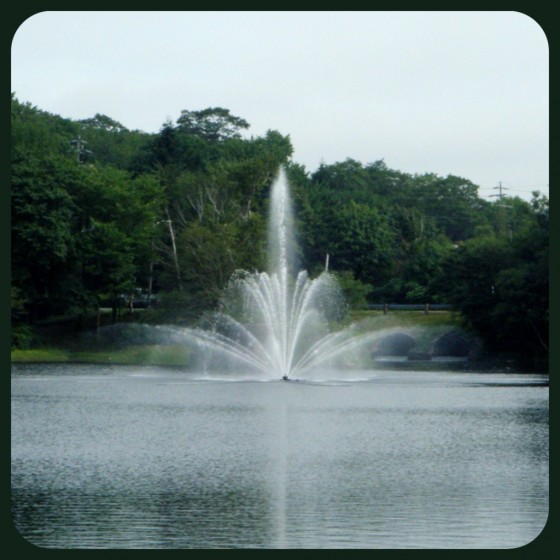 Have you been noticing the talk about daylighting Sawmill River in Dartmouth? To get up to speed read Sam Austin’s post on Spacing Atlantic. (Hat tip to Halifax Examiner for the link). Sawmill River was the out flow of the chain of lakes that were the first section of the Shubenacadie  Canal.  It was a power source for running mills from the eponymous saw mill to Starr Manufacturing, the maker of world class spring skates.

I’m fond of Dartmouth but I understand that I really don’t know the town. As I read the daylighting stories I was comforted because  I sort of walked the route of the river a year ago.  Other strangers might be interested in what I found.

My start was at the new Kings Wharf development. It was clearly a wonderland of engineering as land was claimed from the cove. It felt very contemporary to see new waterside buildings elevated to handle all those melted glaciers and yearly “once in a century” storm surges.  Nice to see industrial operations and condo living playing nicely together (I hope).

Soon I was walking along what I assume is the outlet of Sawmill River.

There were bridges (foot and rail) that made me think of James Whistler’s Battersea Bridge painting. When I checked maybe not so much, but it does suggest that  you could enhance the bridges with some colour and light. As I started up the waterside trail almost immediately there was a big surprise: Seamore the floral turtle. His label says he was “created with fun” and a lot of hard work for sure. The largest floral creature in the province?  Does everybody but me know about this? Soon the river goes underground and the trail becomes less obvious.  I found myself in the parking lot of a drug store transfixed by a giant mural.  Part of the narrative involves a high wheel bicycle, an air conditioner and two Edwardian gents.  All I can say is . . .  well really, I can’t say anything. So  I continued on my way humming Justin Timberlake, and there across the street was St James.  I’ve never examined it on foot-  some very contemporary looking details on the pinnacles. The stone wall in front of St James is famous for the masons’ marks, apparently sort of a signature, left by the masons who were building  the locks in the canal. The only other place that I’ve seen such marks is on the Henry House. Then I was walking up the greenway which is one of the proposed routes for the river.  I could imagine that. The space feels tentative. There is earnest interpretive signage that made me remember the Lost Cod  design for Starr Manufacturing that was on that very site. I was pleased to see a little service building for Heritage Natural Gas.  It was a simple design that suggested a small  industrial building and it was built of real materials.  There was simple, informal landscaping that showed someone cared. I was impressed. This leg of my journey along the waterway ended with an appropriate display in Sullivan’s Pond. We have visited a couple of cities where long covered  rivers have been daylighted, and next I’ll give my tourist eye view of those experiences.