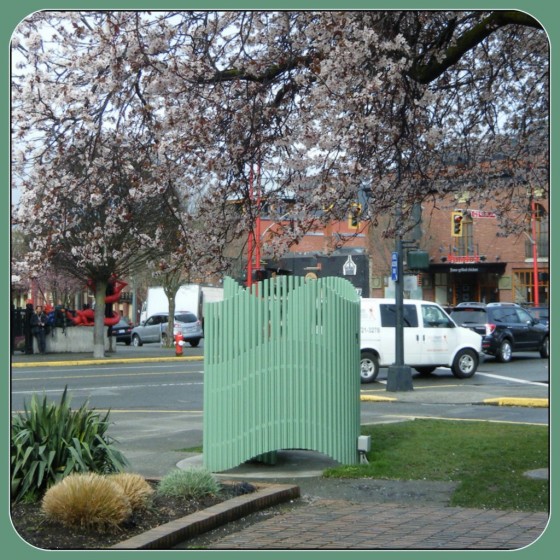 On Twitter I noticed that interpreted reporter Frances Willick had spotted a cardboard urinal on (it looks like) Hollis Street. “Cardboard doesn’t seem like a good idea here”  she mused. This reminded me that on the other coast we had seen an outdoor urinal made of stronger stuff.  In 2012 we spent  March in Vancouver to experience urban and early spring.  We also attended architecture tours and lectures, including a presentation by a UBC architecture professor, Matthew Soules.

He had been hired by the city of Victoria to design  “urination infrastructure.”  Seems that young men were forgetting to pee before they left  bars at night in downtown Victoria and were relieving themselves in the entrances of shops. Sound familiar?

An attempt at a solution was a public urinal , something that has been common in Europe,  but is totally absent from this continent.  Soules had fun working out a design vocabulary that would suit Victoria and the geometry for the structure. We visited Victoria and of course sought out the facility.  It sits sculpturally on a traffic island. There are no moving parts; you enter a spiral  and the walls made of pipes provide a  strategic balance between the transparent and the opaque. The pissoir appeared to be an immediate success.  I couldn’t find recent reports to see if it had been an enduring solution.  I know you are already asking ‘and what is provided for women?’  This is really interesting: the project was not to provide public facilities, it was to reduce a nuisance.  Studies showed that women were not a big part of the problem. They do get to stand outside the urinal and make rude comments.

Victoria got a lot of publicity for this project and began thinking about maximizing the potential of the small so they commissioned Soules to design a  Victoria bicycle rack.  It had to be accepted by the bicycle crowd and not cost more than the standard commercial rack. The solution was a  bold “V.” I’m trying to think of some small interventions that are special to Halifax.  There are probably many that just don’t pop into my mind.  Remind me.