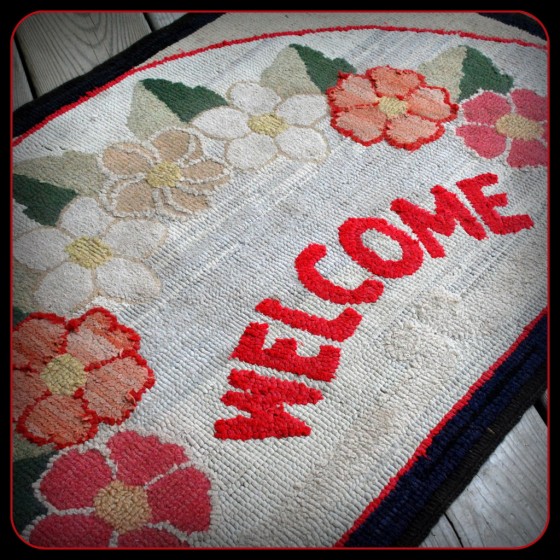 I noticed that Garrett’s By the Bridge in New Glasgow was recently demolished. In their later days (the last 40 years) I think of them as an antique store but I believe they may have sold sporting goods and musical instruments. Ask someone from New Glasgow.

The special reason that we should all take note of the passing is the building was home to a company that produced patterns for hooked mats from the 1890s until the 1970s.  Hundreds of thousands of these patterns, printed on burlap, were sold around the world. The amazing story is here.

There were dozens of designs; popular ones included schooner Bluenose and the Three Little Bears (not together). This welcome mat is a Garrett design. The design was printed and the hooker could use whatever colours they fancied.  The hooking was usually done with rags cut into strips. I like the idea that designs we might assume were “original” to the maker were often arriving through mail order from a company like Garrett’s. When you visit historic house museums there are often hooked mats on the floors and it might be good training for your eye to guess which are Garrett’s and which are home designed. To help you along your way a number of the original patterns are shown here. You can also buy patterns if hooking is what you have in mind.

Thinkers Lodge in Pugwash was consciously decorated in a colonial revival style (in the1950 -60s) with many hooked mats that helped give the centre an informal, regional feel. It was charming  in 1973 to notice that the fishing boats tied up at the wharf in Port Bickerton, far down the Eastern Shore, all had hooked mats in front of the wheel. I imagine the mats were worn ones that were no longer good enough for the house. Scottie dogs do add a homely touch to a vessel (and could be a Garrett’s pattern). Anyone ever noticed this practice elsewhere? It felt like the end of a material culture tradition. Bonus, because I’m fond of this graphic:

Wool rags for mat making could be dyed, so dye companies were promoters of craft as this c1900 pattern book demonstrates. It also suggests some of the reasons you should be hooking. Old Stanfield’s long, wool underwear were apparently a good raw material. And Nova Scotia is also the home of the Hooked Rug Museum of North America who have a display dedicated to Garrett’s.