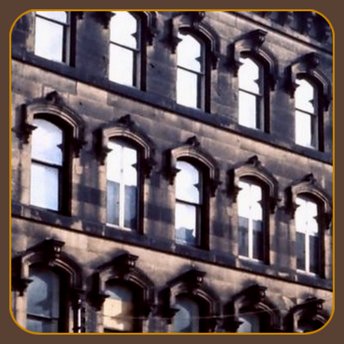 Folks seemed to enjoy my last post of downtown commercial buildings in the 1960s and 70s.  That has encouraged me to put together this little collection of photos from the later 70s and 80s. After the mid 70s I generally took slides, because I no longer had access to a dark room, so now you get some faded colour.

This is the building at the end of the Granville Street Mall that is now part of the Art College campus -the Dawson Print Shop is on the ground floor. At this time in the 70s there was still a street and the whole block waited to learn its fate. (As an aside we are unbelievably lucky to have an art college downtown and you should all send them thank you letters and if you can include some cash.) This building was across the street from Province House and came down when One Government Place was built in the 80s.  The glass block modernization has an uncomfortable relationship with the original cast iron pilasters.

This little block on Grafton has maintained a youthful vibe since the later 70s  when the top photo was taken. The shop to the right was Introduction Design – many people bought yellow plastic coffee carafes there and still have them. I’ll show you ours some day. Fireworks was originally in the donair location before moving to Barrington Street. The lower photo is 2012. For a moment in the 70s Paul and Sophie Chapman ruled Argyle with the Five Fishermen and the Unicorn.  The Argyle House door led up to my friends in the Film Coop (where our independent film making began). The white doors led down a couple of steps to the Unicorn which sold pretty things as well as clothing . It included a little cafe, the Strawberry Patch,  where I had my first croque monsieur (with a milk shake). The young moderns would know this location today as the Foggy Goggle. I’ve shown this picture before  but it works in this sequence.  When the Unicorn left Argyle St they renovated this building on Grafton that is now the Stubborn Goat. We’ll continue with the theme of brick buildings that became bars.  I believe this was built as a Salvation Army citadel in the 19th century.  Now it’s the location of the Halifax Ale House. Oh dear. These buildings on Morris Street are now the Haliburton Inn and the original Hamachi location. The ABC Bargain Centre is a unique little building that has always fascinated me. Someone should tell me its story and show me the space with the windows. The building the the left was an early location of the Dalhousie Law School. I’d tell you how I know but it is not an altogether happy story. Some folks will notice the MG. I guess a subtext of these photos is that there was a time that our building stock had become quite run down. Lots of similar buildings were taken away but I’m pleased to realize that so many of this little group has survived and are now serving liquor.