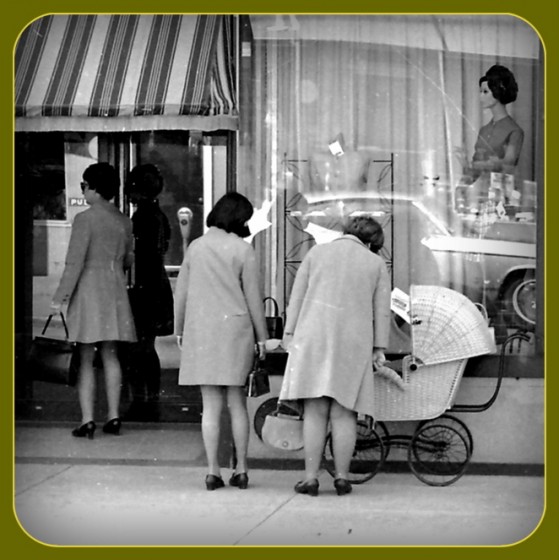 In the late 1960s I saw a few photos by the American photographer Walker Evans.  I was particularly attracted to his images of quirky places of  business. Occasionally I’d take a picture with his influence in mind and also I was interested in making photos that were just dreary.  As a consequence my little collection of photos from the 60s and 70s  includes images of some structures that were under appreciated and usually not much is happening. I can’t remember exactly where this was located and folks from the area are vague too. It may be on the edge of the area cleared for the interchange, c1966. Here are some examples of my photos about nothing (just like Jerry and George). I’m standing in the parking lots of Spring Garden (they still have never got any better). Fenwick would have been new and the Clyde Street  liquor store has been renovated several times since (this parking lot now has a condo on it). I noticed  recently that the  wall  in the lower photo is being  resurfaced yet again. It is now what I think of as a ‘wedding dress store’ on Dresden.  At the time of the photo in the early 70s  it was a German restaurant. This service station was at the corner of Prince and Argyle, so within the new convention centre site.  It was somehow part of the Chronicle Herald’s complex of buildings.  The bricks were glazed white (very trendy today) but not kept very clean.  Reflected in the glass you see me and the Carleton Hotel across the street. A block to the south on Argyle was this little building , the dispatch office for Maple Leaf Taxi (and another telephone). Neptune’s second stage may occupy this site today. Around the corner on Sackville, this is what the entrance to Neptune looked like in 1967. The patchwork of asphalt siding remained for many years. Over on Spring Garden here is a little sequence in front  of Mills Brothers (I didn’t take many pictures of people).  A baby in a wonderful, vintage, wicker perambulator has been left outside while its mother went in to shop. In those days the village enjoyed a  street baby, now they would call the cops and report it as abandoned. Actually the pram would probably not have been  allowed in the store. This 1969  photo is unfair to this elegant  little pavilion at the corner of Hollis and Terminal Road , where the big silver building is today.  We imagined it would make the perfect little modernist house on a rocky headland.   It made a pretty car rental office too. Just around the corner on South St was the famous Gondola Restaurant. It had the sort of over the top interior decoration that looked exotic by candle light but you would not want to see it in the daylight. The snapshots I take today are often similar to those from 40 years ago.  Here are a couple of  buildings on Agricola North that made a nice pair. I’m sure they will age just fine.