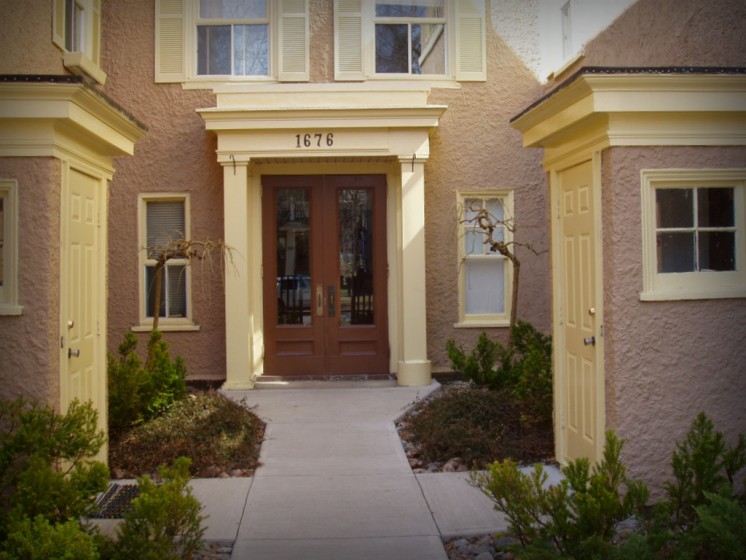 A building form I have been trying to be aware of  is the apartment building.  When I grew up in Halifax in the 50s it seemed like there were few multi unit buildings; lots of duplexes (which would be interesting to document).  Over time I’ve realized there are more  apartment buildings than I was acknowledging and I began to imagine a chronology or a typology .  You get to see my first presentation.

I suspect our earliest purpose built apartments were buildings like the Colburg.  Anyway it is a wonderful model: long and narrow , triple deck walkup, commercial at the corner, fab bay windows.  Ignore the dinky gables on the roof (I’ve tried to crop out)  they appeared when it was re-roofed in recent memory. A little gift to the street is the apartment name in leaded glass over the entrance. And just to show you what could happen if Hal Forbes gave his magic touch to the Coburg:  here is the triple decker  on Cogswell that he did his San Francisco number on.  Learn more on Hal’s Facebook. On College St is another model that feels slightly more recent, teens?  I assume there are two very long narrow apartments per floor each with a south facing sun porch.  Desire. When I was young the largest apartment building I was aware of was the Commodore on Larch Street.  Again I don’t know the age but perhaps the 20s. There was very little building here in the 30s during the Depression.  It is unusual in Halifax to have an entrance courtyard.  Interesting to see small apartment buildings designed to take advantage of natural light. When I took these photos several years ago someone had polished up one of the swell neo-Gothic handles on the front door but had re-installed it upside down (that’s why “noticed” is in my name). Perhaps our oldest big apartment with an elevator is the Westminister on Morris St. It helpfully is marked 1920 .  In the 70s the original tiny elevator was still in use and felt quite archaic – it may still be there.  There are some elegant  details on the subtle bay windows. Next to the Westminister  is an example of the small apartments I remember being built in the 1950s.  They fit on a single lot and were built all over the place – particularly in the University district.  It is interesting to see some of them being totally reworked in the last couple of years. When the rat infested Arena on Shirley St was taken down in the late 50s (think skating and boxing) there was room for a larger group of low rises.  Their major charm today is the coloured glazed brick that differentiate the buildings. This survey will end with Spring Garden Terrace built c1962.  It was the first really big and desirable apartment block. The grey brick, the balconies, swimming pool; it all felt modern and exciting for a moment.The times they were a changing. So that is a little visual survey of apartments from my point of view as an observer. Up to this point in the story we do not have that many examples but from the 60s on the number explodes and I really have not figured out how to look at them.

The examples shown here are probably all models that were developed elsewhere.  It is fun to visit Boston or Toronto and recognize a “Westminster” or a “Commodore.”  There they have more than one example.