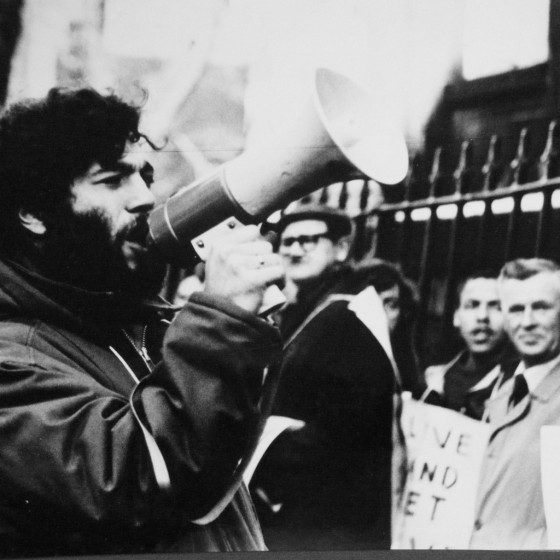 Over on the Halifax Examiner site today a story by Hilary Beaumont began: “they might have marched out of a history text. In a scene nearly indistinguishable from a 1960s civil rights protest. . .” She was describing the local demonstration to show solidarity with protesters in Ferguson, Missouri.  There have been many great photos on the internet of our  march and it brought to mind a little collection of 60s demonstration photos that I’ve kept the last 40 years.

I went to Dalhousie in the 60s and was a member of the  group that took photos for the student newspaper and the yearbook.  When the first big international anti Vietnam War demonstrations started about 1967 we were excited to have the opportunity to photograph events beyond our regular fare of Winter Carnival Princesses or basketball games.

There were several years when demonstrations (for various causes) were common but by the early 70s the energy had changed and the demonstrations felt so yesterday.  I still knew folks in the photo unit and I made a selection of photos from their files and mounted a small exhibit in the art gallery in the Student Union Building in the spring of 1971.  Perhaps you will enjoy them too (without the history text).

A good march assembled in the Grand Parade, swung past the Legislature, went up Spring Garden and ended with some speeches in Victoria Park.  In this photo marchers assemble below a Moir’s Chocolate billboard that says “Some Good.”  The Moir’s factory was where the Trade Centre is today. We were drawn to visual cliches  and innocent children felt so right. Most of the photos I printed on high contrast paper for  more drama and as a consequence a lot of detail, like messages on signs, was lost.

For us the iconography of demonstrations came  from the US , starting with civil rights protests in the early 60s.  We were familiar with images of confrontations with police.  We took pictures of police but my memory is that they were always  helpful with traffic control and keeping away folks who were against peaceniks. Here a policeman keeps a watchful eye as a mouthy prowar demonstrator tells the late  Rocky Jones a thing or two.  I’m certain Rocky was unconvinced. I don’t know who these guys were but they could have stepped out of a Norman Rockwell illustration. And not everyone was young. Here is  James Aitchison  a professor of political science at Dal who was also leader of the provincial NDP. The pro war folks who came out for the early demonstrations made good visuals.  It was our impression that some the “Bomb Hanoi” folks were St Marys students but that could just have been our prejudice . Also among the pro war crowd were some sorts of characters that I’m not sure you see downtown anymore. Once the vocabulary of protest was understood they happened with more regularity.  These images I believe came from anti poverty marches. The aesthetic contrast of this pair of demonstrators appealed to me.  On the left is a Maoist who demonstrated regularly in the Student Union.  On the  right are Mount Saint Vincent students who had gone out to the airport to protest the presence of an American warplane (perhaps with nuclear weapons on board ). On campus tensions sometimes ran high.  Here a Maoist demonstrator is removed from the Student Union  by members of the newly formed campus security. Often we just took pictures of people we knew like my former girlfriend. So there you have a little glimpse at another time that still looks all too familiar. And I’m pleased to have an opportunity to show the images again. Can I throw them out now?