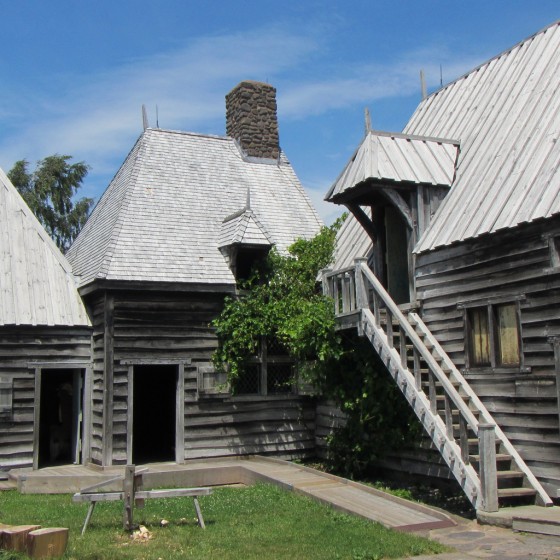 Do you ever visit the Port Royal Habitation?  It was close to our  cottage in Bridgetown and as a child I was taken every summer and ran up and down stairs and hid in bunks and fired imaginary guns over the palisade.  But for the past few decades we have not made time for a visit,  until a couple of weeks ago.   (In this photo I am on a visit with my brothers in about 1951. I’m sticking close to my mother because children fall down wells). The short story of the site is French explorers built the original Habitation in 1605 making it the first European settlement north of Florida.  Using that criteria virtually everything they did was a “first”  but the important ones include:  European style agriculture,  European theatre (our Neptune Theatre is named after their production) first  European style social club (Order of Good Cheer).  Get the idea?

To our slight surprise we were thrilled to become reacquainted with the site:   it is so rich in memory  and the fanciful rebuild, now over 70 years old, is full of charming details.

In the 1930s a number of folks worked hard to have the Habitation rebuilt despite having very little information about the original .  What we got was a simulation of a late medieval  French fortified farm.  In the picture of my visit as a child the site  had only been officially open about 10 years and the exterior had a dark stain.  Now in old age the buildings have been allowed to turn to dignified silver. When the building  project finally got underway it provided much needed employment in an area hard hit by the Depression.  Many 17th century skills still existed:  men accustomed to building wooden vessels were expert at using adzes to shape beams and blacksmiths still existed who could make wrought iron hardware. The quality of the workmanship is so high that it feels like a building from the Arts and Crafts movement or a rustic ski resort in the Alps. “Medieval French farmhouse ” suggests the picturesque  and generally that urge has been resisted but sometimes stuff just happens. An enduring legacy of the Habitation is the Order of Good Cheer – a particularly French concept of how to deal with dark and melancholy winter by eating well  and being convivial. There was a time when visitors to Nova Scotia could get a certificate of membership in the Order if they wrote to the Department of Tourism and told them they had been in the province for 3 days.  I think it’s time to bring  back the Order for Nova Scotians (without the cosplay please).  See you next  November.

So visit the Habitation to understand where our European narrative on the continent began and to enjoy an antiquarian vision of the past.  And if you are 5 years old, quick run up the stairs and hide in a bunk.