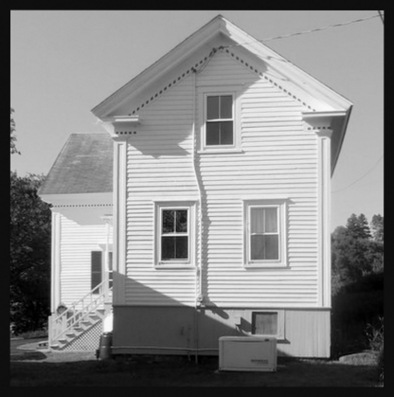 My blogging colleagues the peripatetic Gillian and Drew have been joyfully sampling the Parrsboro shore.  Their enthusiasm made me revisit some photos from a very similar expedition Sheila and I took at this same time last year.

We were based in Spencer’s Island so we could go to the amazing Forager’s Dinner at the Wild Caraway in Advocate.  There was lots of time to  enjoy the architecture and and see if we could notice any trends.  Take for example these tiny diamond elements on cornices, so carefully painted.  Maybe you see them elsewhere but not common I think. These little arch-topped gable windows also seemed to be popular in Advocate and Spencer’s Island. Our bedroom in a rustic B & B had a similar arch topped window. We also got this tiny door (maybe to the mini-bar). A shore-side building had this very eccentric shed dormer . Older cemeteries are regular stops for us.  I’m not very interested in the people buried there  but the setting and the design of the markers provide lots of amusement.  Advocate’s cemetery had it all.  A panoramic view of Cap d’Or  and the Bay of Fundy  plus a series of markers improbably topped with a cylinder, cube and sphere . Sign painting is another element that is fun to notice (and doesn’t “Picnic Grounds” have an nice old fashion ring).

And just so you don’t get the idea that the material culture up there is all folksy and vernacular, here are  a couple of examples of contemporary architecture.  Most extraordinary is a very high concept series of pods and landscape interventions in a field in Spencer’s Island. They were constructed by architecture students for a variety of uses including a theatre and cinema. The main building at the Age of Sail Heritage Centre in Port Greville was an 1850s church.  In the early 1990s architect Bob Parker did a sensitive reworking of the building  (that won a Lieutenant Governor’s Award).  I would  also give an award to the traditional style lobster rolls we were served at the Centre. To end, an iconic view that for some reason does not get many icons. The picnic grounds mentioned on the sign above are at Fox River and from there you look directly across at Cape Split.  It’s a striking sight and if you are not that into hiking it may be all the Cape Split you need.