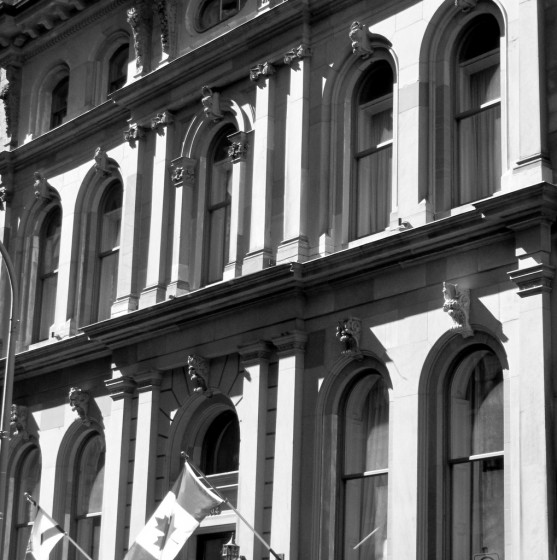 With 40 venues to choose from during Doors Open you could organize your visits in many themes:  halls of worship, places of learning, seats of power – you get the idea.  A theme that appeals to me is a group of buildings that were all built about 150 years ago, around 1860.

Start at St Matthews on Barrington St.  This was designed by a Toronto architecture firm William Thomas and Sons and completed in the late 1850s.  The Presbyterians needed a new building because their old one across the street from Province house burned down.  Their new location was a little closer to the developing suburbs in the south-end and next door to  Government House, another power location.

Notice the great cast iron at the entrance: decorative hinges and floral fence. Soon after they designed the church the Thomas firm won the competition to design the Court House, finished in 1862.  So walk up and look in the Provincial Courthouse you see so often on television as accused are led up the stairs.  It was bold to build so far from the center of town  but there had been several big fires and this seemed a safer location next to the old Burying Ground (closed by this time). The wacko Italian Renaissance style  stone work has been wonderfully restored,  A Scottish stone mason named Geodie Laing did  the stone work  and also carved the lion on the Crimean War memorial across from Gov House  (also in 1860).

Now stroll down to the Halifax Club that was built in 1862. Another location of power and also in an Italianate style.  There are unusual interior windows in the entrance and the tile in the hall is a thing-O-beauty. When you are out in the street be sure to look up at the bountiful working gals supporting the cornice. And now the trick location:  the Legislative Library in Province House. This room had been the location of the Supreme Court and wasn’t needed for that purpose when the new Court House, you just visited, was built.  As I’ve said in a previous post this wonderfully preserved space is a not to be missed treasure. If you have room for more of the 1860s go down to the Granville St Mall and gaze about. This block burned in 1859 and many of the new buildings were  also designed by the Thomas firm.

Today we are excited by all the tower cranes downtown.  One hundred and fifty years hence which of our current projects will be on Doors Open?  The Library for sure.