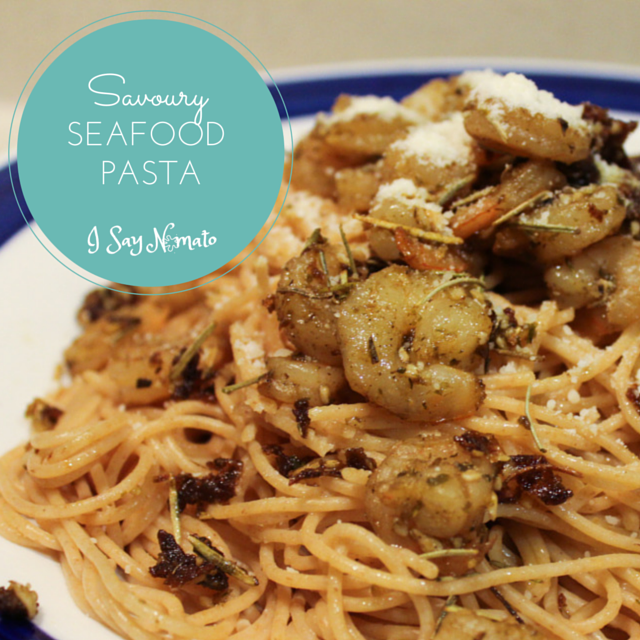 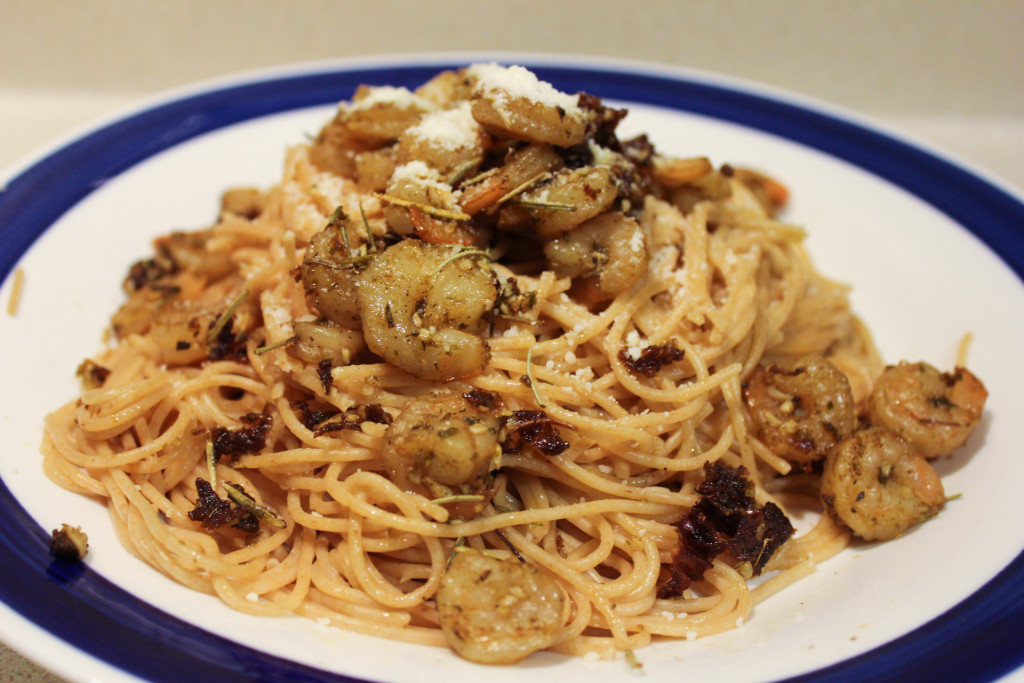 I’m so excited to share this recipe with you! This recipe for Seafood Pasta is an oldy, but a goody, one that I created after experimentation. Over the years I’ve added things and taken things away, tinkering as I get new ideas for it. It’s the recipe I take out when I want to show off my cooking prowess. No one needs to know how easy it is!

First things first, get your water for pasta boiling. I usually toss in some salt and some olive oil for flavour, and let it sit on medium-high heat. Now you can just leave this puppy on the back-burner and forget about it until it’s time to dump the pasta in.

In a medium saucepan, I put in a little olive oil, just enough to thinly cover the bottom of the pan.

I have to warn you that I’m a garlic addict. Seriously. We have meetings. My mother-in-law has a bowl that says “There’s no such thing as too much garlic” and I whole-heartedly agree. I was indoctrinated young, and there’s no turning back. So when I say you need a whole bulb of garlic for this recipe, I mean it.

You’re going to mince that whole bulb of fresh garlic straight into the pan and let it cook just for a little bit by itself. Maybe a minute or so. The fresh garlic is key. I’ve used the pre-minced stuff from the jar, and it just doesn’t have the same flavour. I had to add some garlic powder to give it the kick I needed. Alternatively, if you don’t have a garlic press, or want to try slicing the cloves of garlic thinly and putting those in, that works too. Some days I prefer it this way because the slices get all crispy and chewy like candy, but it is a little more time consuming.

Once your kitchen starts to smell like it could scare any vampires away within a five mile radius, add your shrimp. I find the shrimp works best if it’s either fresh, or was frozen raw. In a pinch, pre-cooked shrimp like I’m using here will work if you can’t find fresh or raw, but it doesn’t tend to absorb the flavours quite as well. Now, I’m a Nova Scotia girl, so I love to toss in scallops too when I can find them on sale, or even better, fresh in season from a seafood truck on the side of the road. If you decide to add them, you’ll find they work perfectly with this recipe.

Toss in about a tablespoon each of rosemary and oregano, and about a half a tablespoon of thyme. If you feel like that’s not enough, or too much, feel free to add more or less. I don’t add a lot of salt to my recipes, and despise blandness, so spices are my not-so-secret weapon. This recipe was born in a sea of approximations, and its flexibility is one of the most appealing things about it. I’m not the boss of you.

Next, we pour in a half a cup of chicken broth. I like to use my own Homemade Chicken Stock, because I find that the ones from store either a) have the dreaded, vague noun: ‘spices’ on the ingredients list, or b) have enough sodium for an ancient Chinese noble to commit suicide with (seriously, I promise you it’s a thing)

Now we stir a bit to make sure all the shrimp is coated with the herbs. Yum! Already starting to look delicious. Turn up the heat to medium-high so the broth starts to simmer. It should smell absolutely amazing. This is the point where, if anyone is at home with you, their questing noses will lead them to the kitchen in a quest for the source of the smell. Do not be perturbed by faces that suddenly appear, begging to be fed. This is part of the process.

By now, your water is probably boiling merrily and is ready for the pasta, so just toss ‘er in, and stir a little to prevent sticking (only a little!!!! Do not overly stir your pasta!). I love using spaghettini or angel hair pasta for this recipe. Normal spaghetti is good too, but there’s just something about how the shrimp works with the thin pasta that makes it sing.

Bubble, bubble pasta pot. Boil me some pasta nice and hot! Strega Nona anyone? I loved those books as a kid. Most delicious disaster ever!

You’ll notice that the broth is being absorbed into the shrimp as well as evaporating. This is perfect. You want the liquid of that broth to be gone, leaving behind only its taste. In my head, I can make this part go faster by hanging over the pan and stirring the shrimp in hopes that my longing expression will convince it to cook faster, because by now it smells so good that I don’t think I can wait another second.

Once the broth is gone, let the shrimp fry. You heard me. Let it get all crunchy and crispy and sticky. All that brown stuff on the bottom of your pan? Scrape that up with your spatula! While it looks gross, it is loaded with flavour. Plus, you have the added bonus of not having to scrape it off later with a scouring pad while you’re doing the dishes. Win/win!

Strain your pasta, and dump the delicious contents from your saucepan on top. Sometimes I find it doesn’t quite mix well, or the seafood is just a little too dry for one reason or another. Just stir in a little olive oil or butter. To top it all off, sprinkle some parmesan cheese on it, and serve with your choice of salad and/or garlic bread (because we can always use more garlic). Dig in! 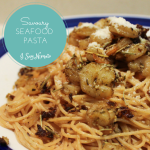