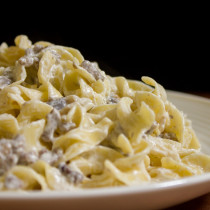 If you’ve been following the blog, you’ll know that Mr. Nomato and I lived for two years on a tiny tiny Caribbean island.

Like 5 miles square tiny, population ~2000 people. There are more goats on the island than people. So. Many. Goats.

Groceries came in once a week by boat, usually on Wednesday, sometimes Thursday if there was a holiday, or who knows when if there was a hurricane. If you weren’t in the grocery store come Wednesday, you were stuck eating canned beans for the rest of the week.

That and frozen meat.

Because if there was one thing this island had in spades at the store, it was frozen meats. No fresh meat to be found, but there were freezers upon freezers FULL of ribs (which I took full advantage of!), and what we affectionately called ‘tube meat’. Ground beef or chicken in plastic tubes.

Now I know you’ve probably seen them at your grocery store, maybe even buy them yourself on a regular basis. I do not mean to disparage tube meat, it was truly a life-saver. The downside was that sometimes we didn’t know exaaactly how much they had thawed in transit in their metal shipping container sailing over the Caribbean Sea (rumours of unrefrigerated containers were persistent). The only solution was to cook the crap out of them! This also meant I needed a good recipe in which my enthusiastic over-cooking didn’t completely ruin the dish.

Lo and behold this recipe for Hamburger Stroganoff from Simply Recipes came to the rescue! Ground beef stroganoff!

And the best part is that it’s easy and pretty quick. If you have the time to boil water and cook pasta, you have the time to make this recipe! And ooooh man is it delicious. *If you do not have to overcook the beef, please don’t! This recipe is wonderful for hiding it, but is better with actually skillfully cooked meat!*

First step, brown the meat! Toss some salt on there, cook it in some buttah… yummay. Make sure to really brown it before you flip it over so you get all that good flavour! While that’s doing it’s thing, you’ll want to set the water for your egg noodles to boil and chop up your mushrooms and onions. (Quick aside, I know I put onions and mushrooms in EVERY pasta recipe I make because I love them and they’re the best, but you can usually leave them out. Not this time! This time you HAVE to put them in or else it won’t be stroganoff!)

Drain out any excess fat, otherwise you’re going to have a liquid problem and no one wants that! Toss your cut mushrooms and onions on there and let ‘em sweat! You want them to get niiiice and brown. Stir and make sure everything is completely cooked. Noodle time! Dump ’em in there and give ‘em a quick stir to make sure they’re not sticking to each other. Now, I have made this recipe with other noodle types in a pinch (because I’m clearly a monster), but you’ll definitely want to use egg noodles. They’re tradition, and there’s a reason why! Now the good part. This is the part that sets this recipe apart from allllll the other stroganoff recipes out there. Add some dry wine. Will the stroganoff taste better with an expensive wine? Maybe. Do I use the stuff you get at the grocery store for 5 bucks? Maybe….

Some for you aaaaand some for me. Let ‘er cook until the wine is almost gone. Remove your meat and wine from the heat, dollop in some lemon juice. This step is important! We’re adding sour cream directly to this dish, and sour cream is temperamental. If we keep the heat on, she’ll curdle.

Also, LEARN FROM MY MISTAKES! Only use FULL FAT sour cream. Low fat sour cream curdles at a lower temperature. And trust me, you do NOT want gritty, curdled stroganoff. Eeeewwwwww. Mix it all in there… Can I just say that American sour cream is weird as heck? It’s all like, solid. Like smooth ricotta cheese consistency. In Canada our sour cream is much less thick and more runny, like yogurt. I wonder why? Do you know why? The internet has proved fruitless. It did, however, helpfully inform me that you can apparently buy ‘Canadian-Style’ sour cream in Russia. Thanks, internet, you’re the best. It’s okay though! This recipe will work for both varieties. Once it’s added to the hot meat it will loosen up. (Dirty sentence #2. I do not apologize this time.)

And voila! A quick and easy dinner that takes you as long as it does to make some pasta. And it is sooooooo good. 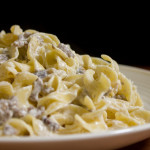