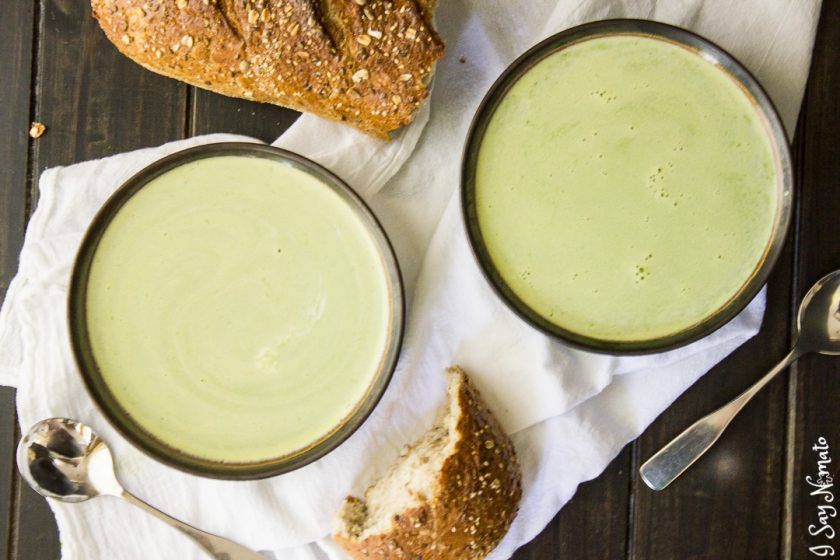 This recipe for easy Cream of Spinach Soup is an old family favourite! Creamy, delicious, and packed full of fresh, local spinach, it is a simple staple that won’t disappoint. If you had told me I would be this excited about spinach soup when I was a kid, I would have thought you were insane.

I still think you would be insane, but not for the same reasons. Honestly, there is nothing about this soup that makes me excited.

This cream of spinach soup doesn’t need me to be excited for it. It’s simple. Unassuming.

There’s no glitter, or sparkles, or even an eye-catching colour.

It’s not something that you look forward to, that you pine about.

And it’s so easy to make.

Toss those sliced onions in the bottom of a large pot, and cook ’em in butter until they’re soft. Add your spinach and broth, cook until the spinach is wilted, and the water is boiling hot. Add a pinch of nutmeg (trust me!) and a pinch of parsley. Blend with an immersion blender in the pot. If you don’t have an immersion blender, pour into a regular blender CAREFULLY, and remove that little plastic knob in the lid, so there’s an open hole. Cover that hole with a thick towel (or 3-4 layers of a dish towel folded on itself), holding it there with your hand when you blend. If you leave the plastic knob in, pressure will build up while you’re blending the hot liquid, and your lid will come flying off and there will be scalding hot soup all over you and your kitchen. No, I am not speaking from experience… what are you even talking about… Give it another whirl or two to make sure it’s blended, and call it a day. Serve with lots of crusty bread.

If you would like to freeze it, I recommend doing so before you add the cream so that it doesn’t curdle upon being reheated!

With Fall coming up (yay!) some of my Canadian blog friends and I have gotten together to create some soups and stews that will keep you going when the cold winter comes! They are all very talented, have a look! 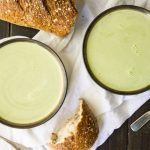 Pin this Cream of Spinach Soup Recipe for later!

Make sure this account has posts available on instagram.com.