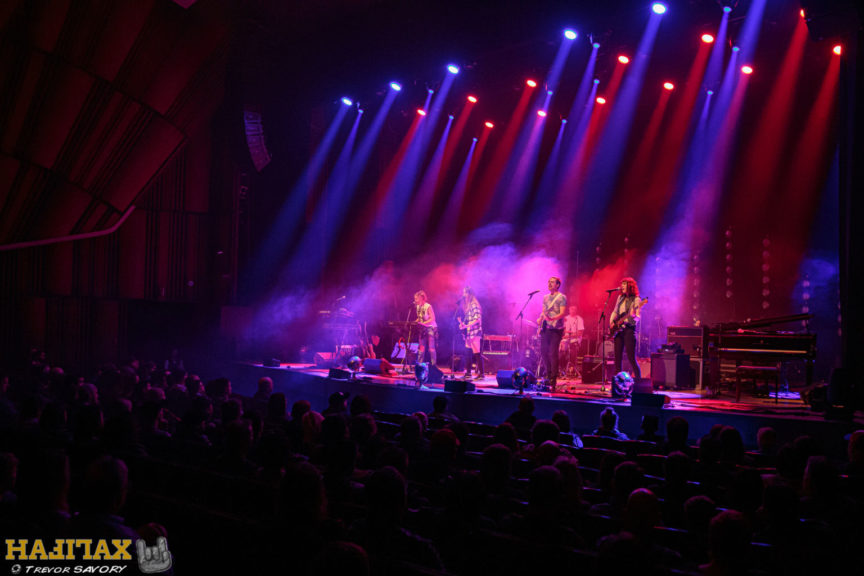 While 2022 has kept pace with 2020 and 2021 in the sense that this has been another dumpster fire of a year, at least live music is finally on the verge of a comeback, and bands are starting to drop new tracks at an alarming rate. There have been some great tunes dropped from seasoned bands, some former bandmates have reunited and are working on a stellar new project, and other acts are just popping up like a trailer for the next season of Dandelions. Why don’t we get into the tunes that have caught this writer’s ear for this edition of the Friday Night Soundtrack?

We Should’ve Been Plumbers – “larger than life”

I was pretty stoked to see that two of the founding members of Halifax punk-rockers Like a Motorcycle (LAM)  reunited during the pandemic to craft some new music. Knowing that Kim Carson is still part of Like a Motorcycle, and Jillian Comeau has gone on to craft interesting EDM music under the moniker Plays W/ Music, my interest was certainly piqued. It was a somewhat ironic choice for the pair to cover a BSB classic like this, but their take has a great disaffected snarl which sets it apart from the original in the best way. Think Hole covers the Backstreet Boys. The band’s debut track “sad and lonely” has a distinct shoe-gaze grunge vibe, while Kim Carson brings a distinctive Courtney Love-esque sound to the proceedings. While their respective projects are currently on pause,  I am excited to hear where this project is headed, and I’ll be here for it.

The pandemic has been dragging on for well over 2 years now, and for some folks, inspiration was crushed beneath a boot of injustice, anxiety and overwhelming malaise. Sure there have been bright spots along the way, but I’m sure that the majority of folks have felt that things have felt pretty dark for the most part. One of those aforementioned bright spots has been the Arkells, who have seemingly been even more prolific during these trying times than a lot of acts. From Rally Cry to hosting online sessions to teach people music, to the band’s seemingly most recent album Blink Once, the band has been fairly ubiquitous during the pandemic, and as things begin to ease they’re ready with their latest single “Reckoning,”  which I can only imagine is going to be one hell of a cathartic arena-banger when we can all reconvene. Some may have felt the band has been a bit light-hearted and vapid in the past, but aside from arguing that those folks haven’t really heard Max and the fellas, this might be one of the weightiest tracks the band has laid on us. Interested to see where Blink Twice is going to take us, with this as the lead single.

Gang of Youths – “in the wake of your leave”

During the early months of any given year, I always have the wonder at the back of my mind if this is the year that my appetite for new music hits the pause button. I know plenty of great folks who get wrapped up in life, and music gets shifted into the backseat, rather than riding shotgun. Then usually at an inopportune moment, a song cuts through everything and eschews that notion and re-ignites that hunger, and this year it came in the form of “in the wake of your leave” by Australian indie-rock outfit Gang of Youths. It immediately caught my ear with its War on Drugs meets the National and a dash of U2 sound; it’s new, familiar and different all at once. The music doesn’t challenge you to like it, it’s easy, inviting and interesting.

This is a track that has been bubbling along on indie-rock radio in recent months, and it has caught my ear each and every time I’ve heard it, but I’ve never actively dug my phone out and attempted to find out who sings it. I finally came across it, and rather than share with you the studio version of the track, I found this great live version. With the added crowd participation it’s still a great tune, with some definitely Springsteen elements at play with the sax and the overall sound, but at its heart, it is a relatable, earnest recollection of being impetuous, young and inexperienced. For me personally, the line “I was far too scared to hit him, but I would hit him in a heartbeat now” just lands so perfectly, and encapsulates many a moment we’ve all found ourselves in. I can’t say if Sam Fender will be around in 2-3 years, but for now, I will indulge in this track.

At the start of February, Skye Wallace dropped her latest single “Truth be Told”.  It’s a song that should resonate with each and every one of us, as Skye explained that it’s about the countless iterations of ourselves that we churn through on the way to becoming who we want to be. The video takes us through the growth process Skye herself had to endure, as someone who moved around a great deal as she grew up and eventually came to terms with herself and made the decision to shed that excess baggage. This is a powerful indie-pop banger, that deserves to be picked up by all of the rock and indie stations from coast to coast.

Hotel Mira – “This Could Be It For Me”

This is a track that I’ve been a fan of now for apparently years, as the Vancouver-based alt-rock act dropped “This Could Be It For Me” in 2019. It still hits as hard now as it did in the early days of this pandemic, and it is still criminally underappreciated, as it bears some strikingly similar tones to fellow BC acts The Gay Nineties, Hot Hot Heat, and The Mounties. There are some definite nods to The Strokes here as well, but Hotel Mira is making sure that the BC indie-rock fire is alive and well. The band’s latest single (from Aug. 2021), “The Eyes on You”, has a similar vibe, so fans of “This Could Be It For Me” will still be in familiar territory. You can regularly find lead singer Charlie Kerr over on the band’s TikTok performing live or just hanging out. Check out the track and show the band some love.