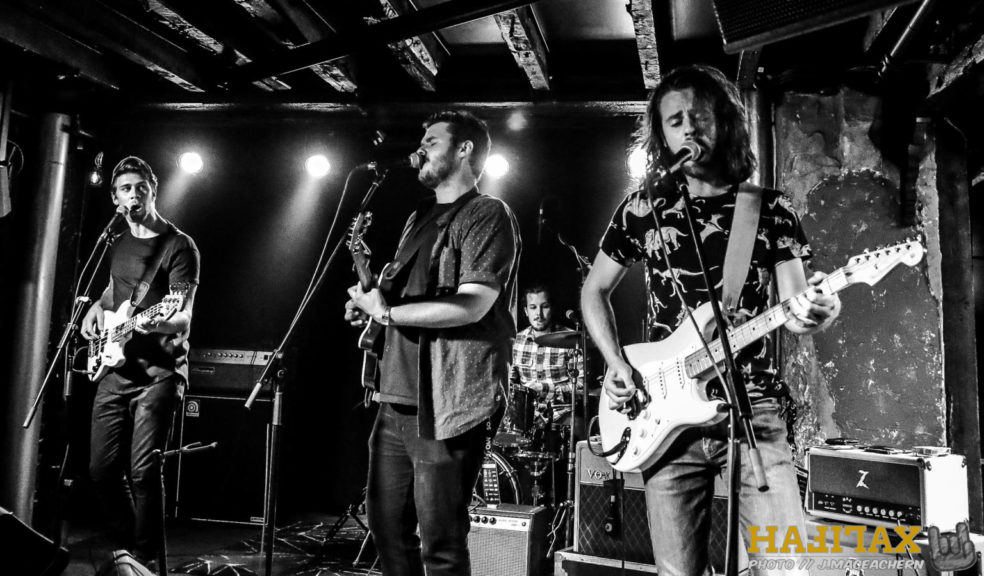 After a solid year of touring and writing, Toronto based quartet, Midnight Vesta spent much of 2019 locked away in a recording studio.  With each member being directly involved in the song writing process, the yet to be named album brought a new life to the group.

“With Seconds (the bands 2017 release) we were all trying to figure out how make it all work.   A couple of members had changed and we really didn’t know what was going to go on so we started recording the songs that were written and decided to go with whatever it turned into. It was  something we did to essentially keep the band together,” he said.  “Then about halfway through the process we solidified the lineup, learned how to book on the fly and how to drop a proper release.  With this new album we feel like we’ve been through this before so it wasn’t as chaotic of a process.  It was also the first time that the four of us could go into a studio together, from the beginning, so we had a better idea of what we wanted to get out of the recordings,” he said.

And for the first time in this groups career it wasn’t a single vision on how the album should sound.  Instead each member of the group came to the early sessions with ideas, melodies and music written.
“It is almost like a Sloan approach where everybody wrote some songs for the record.  It was really cool,”  Carnegie concluded.

But it doesn’t mean that the album doesn’t have a Midnight Vesta sound.  The process simply allowed for more growth within the core group.  In fact, it was Rob Patterson, the groups drummer, who created some of the more musical moments on the album.

“Honestly, he wrote the most musical tune on the record.  There’s chords for days filled with all of these different modulations.  If you heard it you would never guess that its the drummer tune on the album.  It’s really a great song,” he ended.  “I think that there are songs on the album that definitely have a Pete or Nick feel but the actual country sound kind of leaked in from everyone individually, which was a bit of a surprise when we sat back and listened to what we laid down.  I don’t think that we set out to make a country/rock album but those songs just floated to the top,” he finished.

When it came to writing the albums first single, “Complicated Pony”, Carnegie referenced a prior relationship for the jumping point.

“To me, songs are personally rooted and like all things musical they become exaggerations of that certain thing.  It is never quite an exact tale of something specific but it always stems from it.  With “Complicated Pony” the song is like a long distance relationship tune.  One end of the party is sitting there telling themselves that everything is good even if when they feel that things aren’t.  You try to figure out your roll and try to give people their space instead of trying to squeeze the life out of them.  When someone is trying to pull for too much, it never ends well for anyone and it can sour all of the fun that you had in the relationship in the first place,” he said.  “This tune is not a love song in a traditional sense.  Sometimes we can’t be around the people we care about the most, and we’re forced to overcome obstacles. Many relationships require time for healing, pursuing dreams, and discovering new opportunities. Pressure can be the death of love, but Complicated Pony is a song that says ‘I love ya, no matter what, and I’ll be here when you’re ready”.

Carnegie and Vesta hit the road for a two week tour that begins in Quebec and runs through multiple dates in the Maritimes.

“I find that I continue to be blown away by the amount of time we are able to spend with each other.  Whether it’s ten straight days of doing bed tracks or three weeks on the road it’s great that this continues to work.  We’re getting ancy to get back on the road and play.  I’ve got one more day of work to do and then we’ll pack up the van Wednesday morning and just start driving”