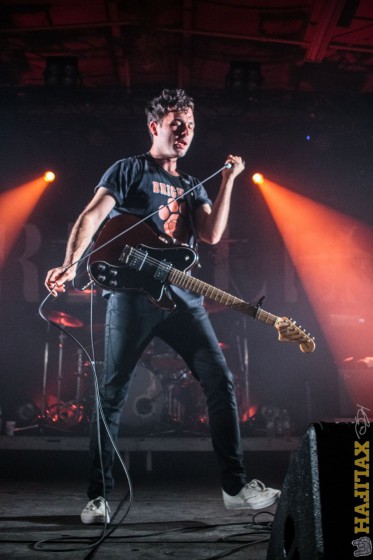 Last weekend saw two thirds of the HAFILAX team venue hopping for a few days, catching as many shows as humanly possible. We crossed the city more than once, hitting most of the venues involved in this year’s Pop Explosion, and I will have some posts up shortly with my thoughts on last weekend’s massive Scotiabank show, as well as my favorite acts of the fest. With this edition of the FNS, you will get a taste of the some of the acts we saw during the fest, and a couple who were getting constant play by Trev in the days following the fest.

“Don’t Come to the Woods” – Backxwash

The first show I attended for Halifax Pop Explosion 2019 was hosted by the Carleton and featured Montreal emcee Backxwash. After discovering her music a couple of days earlier, and loving the entirety of her 2019 release Deviancy, I was excited to be in attendance, even though I didn’t quite know what to expect. What I witnessed was unusual, indelible, weird and wonderful. For an all too short set, Backxwash ripped through a number of cuts from Deviancy, and some earlier material as well, but it was as electric as seeing Killer Mike and Danny Brown for the first time at Halifax Pop Explosion.

After Backxwash wrapped her fantastic set, I met up with Mitch and we hiked up the hill to the Marquee Ballroom//Seahorse Tavern to catch some Designosaur, and the evening’s headliner Japanese Breakfast. I stuck around downstairs for a song or two, and headed upstairs to see what sort of crowd was building. The crowd was solid for a Thursday Night, but once I made it up to the front, I was absolutely smitten by another Montreal band, Caveboy. These three ladies have cornered the market on electro-synth pop, to the point that this might as well be Ear Glitter; it felt timeless and infectious. It was an amazing set, and I even chased that new band high to the Carleton for Caveboy’s 2nd show of the festival (and it was equally good). Easily my favourite new band coming out of HPX 2019. Press play and thank me later.

Ok, let’s get it out of the way, I have slept on Snotty Nose Rez Kids for far too long. They were one of the bands I was most looking forward to finally catching at HPX, and I was not disappointed. While the big room upstairs was jam-packed for PUP’s return to Halifax, the Seahorse was equally jammed for these talented emcees and their DJ Kookum. Yung Trybez and Young D tore up the Seahorse stage for well over an hour last Friday evening, and it’s hard to believe, between Pup and Snotty Nose Rez Kids, the complex is still intact. Trust me, I won’t be sleeping on this potent hip-hop act again. Due to capacity upstairs, I headed back downstairs and caught the tail end of their set before heading back to the Carleton for Caveboy.

Haviah Mighty is riding high atop the  Canadian music scene, having been part of the all-female collective The Sorority (who have recently announced a hiatus to focus on solo projects), and dropped her latest full-length album 13th Floor earlier this year. That album has garnered critical praise for Haviah, and ultimately earned her the Polaris Prize. It was a year ago that The Sorority (w/ Haviah Mighty) played the Marquee Ballroom and blew those in attendance away. This year Haviah was performing in the biggest room in the city at the Scotiabank Centre (alongside Mother Mother and Arkells), and closing her night out on stage at The Seahorse Tavern. Hopefully we’ll see her back here sooner than later.

Like they weren’t going to be on this list. Arkells are easily the biggest act in the nation right now, having assumed the throne left vacant by The Tragically Hip. They headlined the Scotiabank Centre during this year’s Halifax Pop Explosion, brought along Mother Mother to open, and packed the room. Not too many shows come with their own stage set-up, break out a conga line mid-show, and then return to the back of the room for an intimate performance of unoffical wedding song “And Then Some”.  This was my 3rd or 4th Arkells show, and they fail to disappoint. This video will give you an idea of the stage they brought to Halifax.