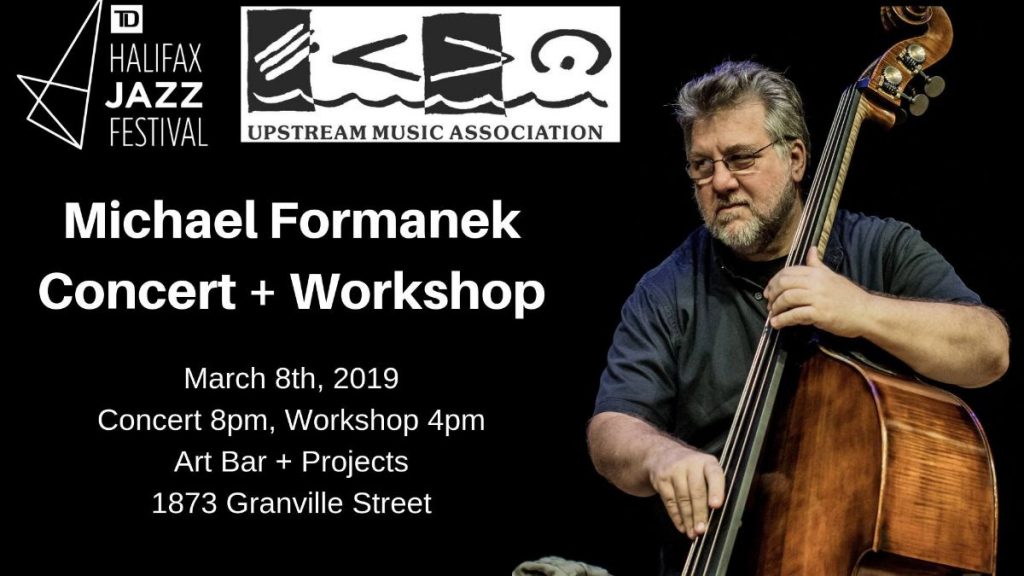 The Halifax Jazz Festival has been quietly growing into one of the premier musical events, that the East Coast has to offer.  Thanks to a tireless effort from all individuals involved and a fanbase as solid as any other, the festival is able to churn out workshops and events throughout the course of the year, allowing for the discovery of the great unknown.  Come March 8th, it will no longer be unknown.

Upstream Music Association and Halifax Jazz Festival are proud to present internationally acclaimed bassist Michael Formanek for a rare performance and workshop of exploratory music. The Workshop is at 4pm and the Concert at 8pm, March 8, 2019 at Art Bar + Projects, 1783 Granville Street, Halifax. Formanek will be joined by Geordie Haley on guitar and Andrew Miller on drums for this performance. Tickets are on sale now, offering special student pricing. Purchase via tickethalifax.com.

Michael Formanek’s creativity and versatility as a musician are displayed across the range of distinguished musicians he has worked with over a career spanning decades. While still a teenager in the 1970’s he toured with drummer Tony Williams and saxophonist Joe Henderson; starting in the ’80s he played long stints with Stan Getz, Gerry Mulligan, Fred Hersch and Freddie Hubbard. (As a callback to those days, Formanek recorded with hardbop pianist Freddie Redd in 2013). Formanek has played a pivotal role on New York’s creative jazz scene going back to the ’90s when he notably led his own quintet and played in Tim Berne’s barnstorming quartet Bloodcount. Nowadays Formanek plays in the co-op Thumbscrew with Brooklyn guitarist Mary Halvorson and drummer Tomas Fujiwara.

Formanek is also a composer and leader of various bands. His principal recording and international touring vehicle is his acclaimed quartet with Tim Berne on alto saxophone, Craig Taborn on piano and Gerald Cleaver on drums, which records for ECM; 2010’s The Rub and Spare Change and 2012’s Small Places both earned coveted five-star raves in Down Beat. Formanek writes, and the quartet plays, compositions of great rhythmic sophistication that unfold in a natural sounding way – challenging music the players make sound like lyrical free expression. His occasional groups include the 18-piece all-star Ensemble Kolossus, roping in many New York improvisers he works with. Ensemble Kolossus recorded their first CD of all Formanek originals for the prestigious ECM label in December of 2014. The CD, The Distance was released in February 2016 and in addition to numerous other accolades also received a five- star review in Downbeat!

Formanek’s other recordings as leader include Wide Open Spaces and Extended Animation for quintet and Low Profile and Nature of the Beast for seven players (all on Enja), and the solo album Am I Bothering You? (Screwgun). Mirage (Clean Feed) is by the occasional improvising trio of Formanek, tenor saxophonist Ellery Eskelin and pedal steel guitarist Susan Alcorn. Thumbscrew’s 2014 debut is on Cuneiform Records. Michael Formanek has made dozens of recordings as sideman, for among others Dave Ballou, Tim Berne, Jane Ira Bloom, Dave Burrell, Harold Danko, Marty Ehrlich, Tomas Fujiwara, and Jack Walrath.

As composer of works for ensembles from duo to mixed jazz and classical orchestra, Michael Formanek has received institutional support from Chamber Music America, the Mid-Atlantic Arts Foundation, the Peabody Conservatory, the Maryland State Arts Council and the Virginia Center for the Creative Arts. As an educator, Formanek continues to teach bass, composition, and improvisation in a wide range of locations in the US as well as internationally.

Workshop Tickets are $15 for adults and $10 for seniors, students or Upstream members.

Concert Tickets are $20 for adults and $15 for seniors, students or Upstream members.

Save money by attending both: $30 for adults and $20 for seniors, students or Upstream members.