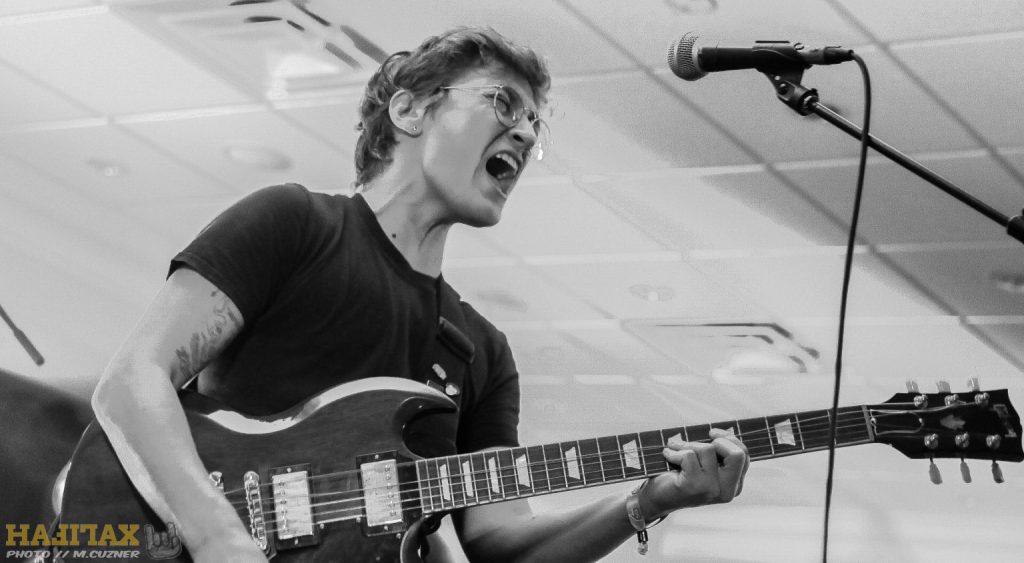 With a new evolved sound all ready to drop, local artist T. Thomason is getting ready to take to the stage on Thursday, November 29th at Halifax’s own Seahorse Tavern. In leading up to the late-November set, T. took some time to sit down and discuss where this new sound has come from, and what we should expect as we move forward.

First off I want to congratulate you on the new single “Loser” and thank you for taking the time to chat today.

That’s great. I’m glad you like the song, and thanks for having me.

In listening to these last two singles, “Bliss” and “Loser”, I feel like it’s safe to say that “Bliss” is really acting as a stepping stone between the Sweet Baby album and this latest single “Loser”.  It definitely doesn’t jump into the pop waters like the latest release, but you can hear it teasing the idea.

A lot of it comes from my background. I was performing as a folk artist for a while, which is heavy into the idea of songwriting, but I always had this rock sensibility. When I sat down to write this new music, this song just made sense. It was right when I was starting to explore this pop world, but still had ties to my past musical life. I think that it makes complete sense that you would be getting that idea, and it’s really why I released the songs in this order (“Bliss” into “Loser”). I wanted to bridge that gap the best way possible, and “Bliss” was a great song to do that with.

So what is it about the pop world that has grabbed your interest? What is it that has brought you to this point in your career?

I’ve always loved pop music. It’s actually a really good representation of what I listen to. The idea of a popular format that has a structure to it, but allows you the freedom to work within itself to create something original, is something that has always interested me. But because this structure has boundaries, I find it challenging, when it comes to putting the songs together. I love when an artist can successfully put all of the parts together and get the song just right. There is just something about it. I also like listening to the different trends in pop music and watching how they shift. I’ve always found it interesting to see what is hitting home with the masses. All of these different elements have always drawn me to pop music.

It’s also a really good medium to get a message across these days. Where it seems to be consumed by the majority of music consumers, it can be beneficial when you have something to say. With smart pop or political pop, you have the ability to bury little ideas into the music, without being necessarily overt about it.  There is just so much possibility within each song, that it’s hard to not be excited.

With this new direction in sound, how have you been allowed to expand and experiment with the different instruments and sounds? It’s almost like you have this massive sandbox that you can really just sink your toes into.

Because I’m not the greatest guitar player, I felt like I was getting to a point where I was feeling really limited with the way that I was writing songs, but because I have a producer who pushed me to not have limits, I was able to open up to new ideas. I have a really great relationship with Dave Henriques (who has produced the Sweet Baby album, “Bliss”, and “Loser”) and when we get together I play him ideas that I’ve started on the guitar. From that point he is able to take that song and start to track around it. At times this means the song will go somewhere unexpected but that can really inspire the rest of the writing. That collaboration is really cool and exciting to me.

From a live perspective, it also opens a lot of different doors. Now you can head out and watch one or two artists come together on stage and produce this massive sound. And I’m not talking about someone getting on stage and just playing some backing tracks. I’m talking more along the lines of an artist being able to explore the music with no rules. From an independent artist perspective, this can be great while touring. It allows me a freedom to branch out and take my music in multiple directions.

Its been two years since Sweet Baby dropped. What, during that time, helped to push you in this direction? Was it something that you felt you had to do, or was it a natural evolution?

Other than a natural drive to evolve as a musician, I think that the main reason to go in this direction (other than my constantly listening to pop music) had to be Dave. He suggested that we try putting together a record that didn’t have any drums on it. He wanted to eliminate the need for live drums. I was very into the idea, but there were times during the recording that I wasn’t overly certain or comfortable with some of the production choices that he was making. It really took me some time to come around to those ideas. I really had to grow as a person and musician to allow this change to take place. It was a very conscious effort that I made.

Ya know, the song “Sorry” by Justin Bieber really signified a shift in the world of pop music and how that music sounded. It was just before that song dropped that Dave started to suggest I move in this direction.  He was right there when the music shifted and he knew this direction would work.

Part of this working relationship comes with a trust that is tough to develop.  How did you get to the point where you were comfortable with Dave and how he changed your ideas, your songs?

I’ve known Dave since I was 18, and prior to producing Sweet Baby, he toured with me as my bass player.  Because of this I already knew who he was and knew what his musical tastes were. In turn he was also aware of my musical tastes. So when we got back from touring with Collective Soul, we had already decided the capacity in how we wanted to work. From there it was easy to jump right into recording Sweet Baby.  But because of the timing, I was playing a certain type of music which meant Sweet Baby would be a rock album. There were times during the process where Dave would push me to try different ideas but it was always within areas I was comfortable. After that process we both felt that we had a great time working together and asked ourselves, what else can we do. How can we take this growth to the next level. It was during this process that Dave really pushed me to explore ideas out of my comfort zone.

How much do you need to be pushed?

I think that everyone needs some of that in their lives. Everyone needs to be able to work with someone that is going to push them to do better. You need that person to make you ask questions about things you think you already know, because really, we know nothing. Because of what I’ve learned by working with Dave, I would say that it is now much easier to open myself to other people, and as an artist, I would say that this is a blessing. Instead of trying to constantly control every situation, this will allow you to let go.  Things might have gotten easier but I will always need the push; you just won’t have to coax me like you used to.

Simply based on what we can see on Spotify, it looks as though this new direction is paying off.  Do you attribute this success to the new direction in which you’ve taken your sound or is there a little more to it?

I think that it definitely has something to do with the direction of the music. Dave was really ahead of the game when we started this recording proces,s and that has allowed these songs to be completely relevant, even after recording them so long ago. I also have a great team that i’m working with. Vanessa Cito, who runs a social media company called Reach, is now my manager and that has been a great experience. It has really helped to build my social media presence.

T. will be performing on Thursday, November 29th at The Seahorse Tavern in Halifax, N.S.  Doors open at 8pm. Aquakulture will kick the night off with an acoustic set at 9pm, followed by local indie rockers The Drug Rugs at 9:45pm and T. Thomason at 10:45pm.

You can follow T. on this journey over here and you can hear the new single anytime on Spotify.