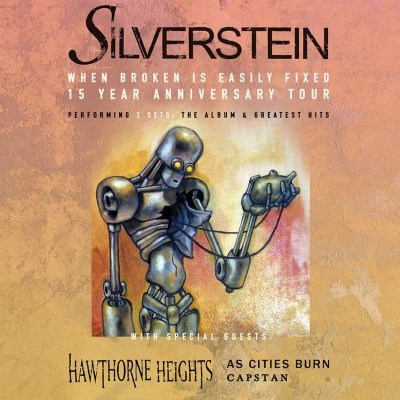 Silverstein will embark on a North American tour this fall, but this is no ordinary trek. The band will be celebrating the 15th anniversary of its landmark debut album When Broken Is Easily Fixed. Silverstein will also perform two sets each night on this run. One set will feature the band performing When Broken Is Easily Fixed in full, followed by a second set of “greatest hits.” Special guests are Hawthorne Heights, As Cities Burn, and Capstan.

The tour kicks off on November 9 in Detroit and runs through December 15 in Toronto in the band’s native Ontario. The tour dates are below. Tickets go on sale on Friday, August 3 at 10am local time. All ticket info is available here.

“As hard as we work on pushing forward with our new music, it’s fun to reminisce and I think important to give some love and respect to the music that started it all for us and the fans who have supported us since the beginning,” said singer Shane Told. “We’ve never been a band to tear down or insult our older material, and I’ve always said we will always show it the respect it deserves. This tour is doing exactly that.”

Told continued, “It’s going to be an emotional ride for sure. But I know we’ll all have smiles on our faces the whole time. It brings us back to an era of innocence and excitement, getting into our beat up van with the heat permanently stuck on, and driving all over America for the first time.”

He finished, “We’re going to be able to do things production wise we simply couldn’t have done 15 years ago because we didn’t have the budget, and in some cases the technology wasn’t there yet. This is going to be the best you’ve seen our band — we’re pulling out all the stops.”