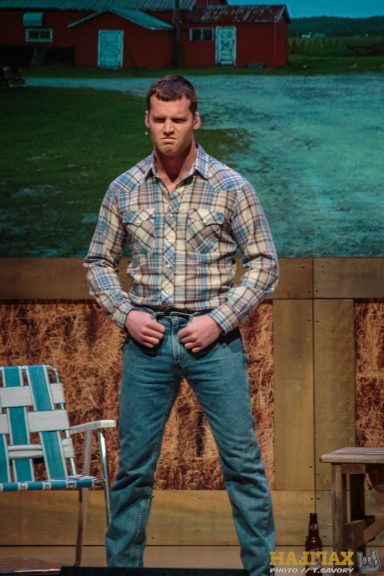 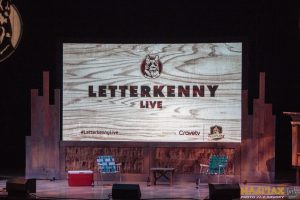 On Tuesday and Wednesday evenings, a little town nestled somewhere between fellow fictitious towns Dog River and Sunnyvale rolled into Halifax. The town of Letterkenny sent three of their ambassadors to the East Coast to spread their good-natured, and sometimes crass, view of the world. You may be thinking to yourself, Letterkenny? Sure, it may not be as ubiquitous as Dog River, or Sunnyvale, but it was long advertised on CTV as one of Crave TV’s tent-pole originals. Fans of the show will typically spend their Christmas vacation voraciously devouring the short 6-episode seasons, then re-watching over and over, delighting in the antics of Daryl (“Dairy”), Squirrely Dan, Wayne, Katie and the other Hicks, Skids, Hockey Players and Christians who round out the cast. 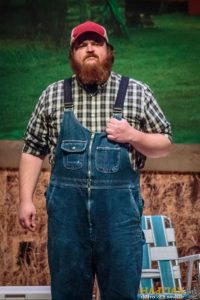 Tuesday night’s performance played very much like a variety show, built around the philosophical and nonsensical banter at the Produce Cart (which provided a portion of the set dressing). Dairy wanders on stage first, and in his sheepish persona runs down the rules of the night, then is quickly joined onstage by one Squirrely Dan (who looks a lot like comedian K. Trevor Wilson). The two actors remark that there are a lot of folks in the audience, and after a bit of banter Wayne, the centerpiece of the show, joins the stage, rounding out the trio. Wayne greets the crowd with his familiar greeting of “How’re Ya Now?”, and prompts a call and response (of “Good! n’ You?”) which extends throughout the show each time he returns to the stage. 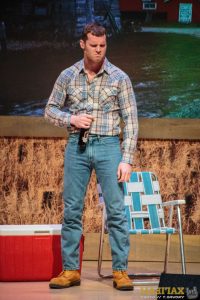 Capping off the opening half of the show is a set of stand-up comedy from the hilarious Mark Forward (it should also be noted that Forward bears a striking resemblance to the Letterkenny Shamrocks’ hockey coach). Forward’s delivery is tailored in a style similar to that of Louis CK (minus the controversy), as he builds his jokes with a conversational style and a skewed humorous take on these rather mundane topics. His take on what happens to grandma when she messes up those cookies for the very first time is controversial and uproarious, and he manages to parallel that story with the humane choice we make for our elderly pets. It’s a fantastic set that will leave both your ribs and face sore from laughing, and will have you asking how does a bear know it’s a bear. Once Forward steps off stage, Jared Kesso (Wayne) takes the stage and advises that we’re heading into a short intermission. 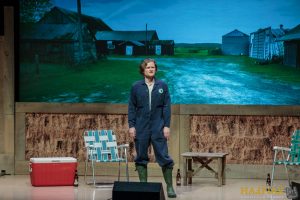 The boys are back for another round of Puppers (the fictional Letterkenny brew), and some more Produce Stand banter. We then are treated to the second stand-up set of the evening, and K. Trevor Wilson strolls on stage to “Glorious”, the illustrious theme song of pro-wrestler Bobby Roode (not to mention he’s rocking a pretty great Andre the Giant tee). Wilson explains that he’s been coming to the East Coast annually since he was 15, and, thanks to our drinking habits, he has a total of 3 clear memories, each of which involves a Donair, and maybe a lighthouse. It’s another fantastic set of comedy that has the room roaring with laughter, and I’m pretty sure the chap to my left is going to pass out from laughing so hard as he’s loving the entire show.

This would have been a rather thin show without the hour of stand-up interjected into the proceedings, and while great to see the boys bantering around the cart, it felt a bit lackluster without at least Jonesy or Riley to raise the ire of Wayne. It was a fun evening enjoyed by the packed house in the Rebecca Cohn, but certainly would have been a great show had some of the supporting cast joined the tour. If you’re still scratching your head about this town of Letterkenny, fire up Crave TV, sit down, and have a Puppers. 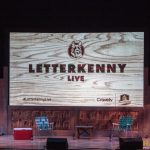 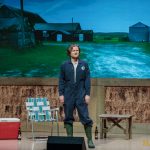 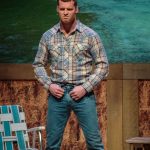 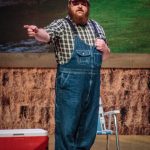 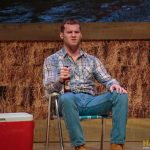 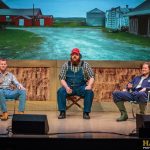 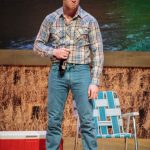 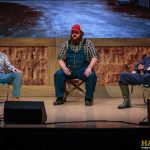 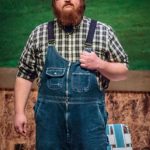 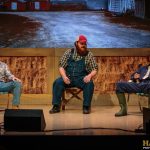 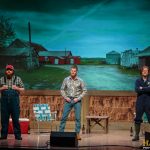 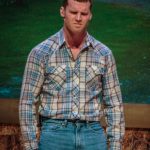 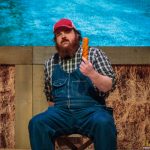