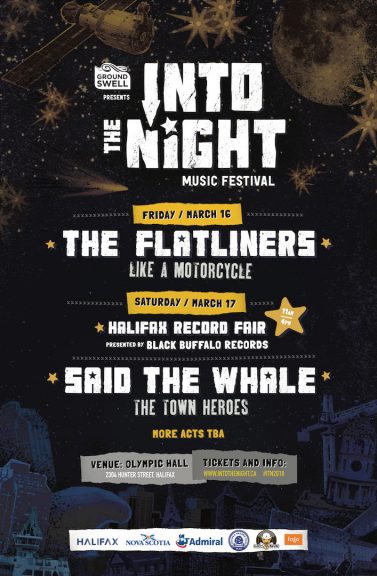 GroundSwell Music presents ‘Into The Night’

(January 17, 2018) GroundSwell Music is proud to announce the newly rebranded GroundSwell Music Festival as Into The Night, a two-day takeover of Olympic Hall on the St. Patrick’s Day weekend. March 16th will kick off with Juno-nominees The Flatliners and Halifax’s own Like A Motorcyclejoining forces to whip punk-rock fans into a frenzy. March 17th begins with a midday record fair and beer garden hosted by Black Buffalo Records, culminating with night of pop-rock highlighted by Canadian indie darlings and Juno award winners, Said The Whale with local faves The Town Heroes. Additional support acts will be announced in the coming weeks.

Into The Night (formerly GroundSwell Music Festival) began in 2015 with a mission to bring together music fans from across the Maritimes and beyond for multiple nights of revelry and song. Set in the heart of Halifax, the ever-evolving festival prides itself in combining music, local craft breweries, wineries, distilleries and food producers to celebrate the essence of being Nova Scotian – kind, supportive, hospitable and a good neighbour.

Tickets start at $25 and are available through Ticket Halifax starting Wednesday, January 17th at 10am.  Into The Night is sponsored by The City of Halifax and The Province of Nova Scotia.

Tickets and Information can be found by visiting