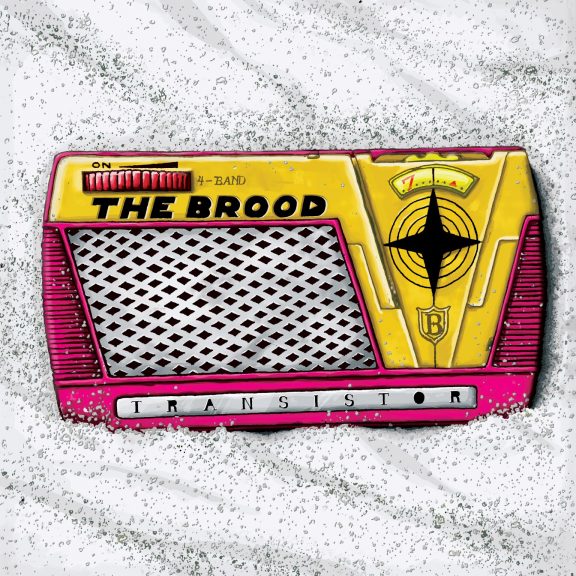 All too often, bands who thrive in a live environment can’t always capture the same energy when trying to carry it over and capture it in the studio. The Brood’s debut full-length album Transistor has managed to break the mould, and lets you hear almost exactly what you’ll get in their live show (less the 6-minute jams and improvs). The Brood combine experimental indie rock with new wave sounds similar to the B-52s and obvious draws from Frank Zappa. After two killer EPs (in my humble opinion), this is a long awaited full-length.

The Brood is full of some of the most under-rated musicians in the Halifax scene. With Seamus on vox and guitars, who isn’t afraid to take a jazzed-out extended solo whenever possible, Siobhan using every viable effect on the keys to transform every song into something completely different than the last, Billy taking walks on the bass guitar that force you to bite your lip and bop your head, and Matt’s tight fills that run the songs transitions from one off-timed masterpiece to another, this band has musicianship oozing out their ears.

A track like “Chicken Cheese Beer” kicks your teeth out from the opening riff of the album. Screeching guitars, a marching bass line, and spaced out keys come together to create a new wave sound that would have Devo shitting their over-sized yellow Hazmat suits. Even when The Brood slows things down on tracks like “Sapphire Blue,” they can’t help but turn it into a different song, not dissimilar to Dire Straits, for a minute at the midpoint. Billy once described it as a song sandwich. When the song starts, it’s one thing, then they veer off into completely different territories, only to come back to the original sound that make you say, “OHHHHH IT’S STILL THE SAME SONG.”

Lyrically, one might not think this band is taking their craft very seriously. They utilize their wit to convey issues that they deal with. Where Arcade Fire has “Sprawls II” about the dregs of living in the Suburbs, the Brood have “Exile in Suburbia.” “Hey now, it ain’t all that bad/I know it ain’t no bachelor pad/Finished basement, frosted beers/We’ll play foozeball for years and years” they claim before, again, tearing into a breakdown of jamtastic proportions.

One of my favourite parts of the album is knowing that the next time I see them live, I’ll know when the jams will take place. Seeing them at Nova Scotia Music Week last year opening for Joel Plaskett was a game changer on my love for them. Only playing about 6 songs in a half hour set is astounding. I would put their jam-ability up against anyone else’s in the game (watch out Umphrey’s McGee).