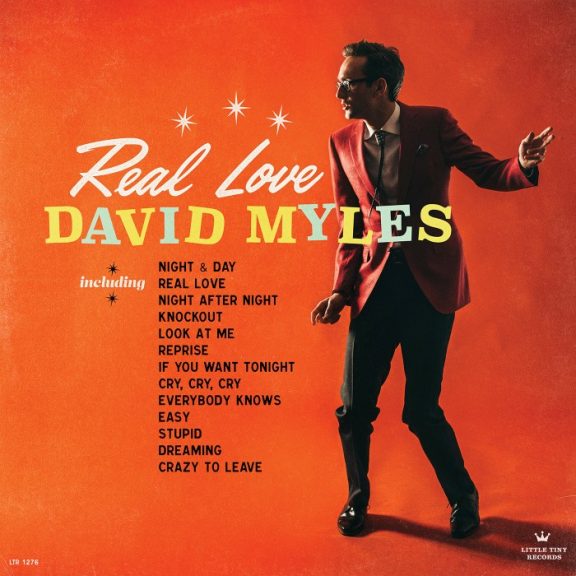 We live in an age where our attention needs to be grabbed quickly, and we’re ready to move on to the next thing within 3 minutes. David Myles’ upcoming 10th album “Real Love” has recognized this phenomenon, and capitalized on it spectacularly. From the opening notes of a signature skiffle guitar riff on “Night and Day”, you’re grabbed and pulled into a Fifties dance hall where you’re unable to escape, not that you would want to, for the following 12 tracks. With his baritone voice that’s deep like Johnny Cash, but velvety like Roy Orbison, Myles gives you the feeling of being safe and secure, while also wanting to grease up that hair and pop in a Marlboro in your Thunderbird.

When he croons on songs like “If You Want Tonight” and “Easy”, Myles has a way of making you feel like you’re the only person in the room. Like that song is about only you. Think about Mike Myers seeing Tia Carerre in Wayne’s World and “Dream Weaver” plays, that’s you and David in your car…but use a less creepy analogy.

The majority of the album’s songs are toe tappers and jitter buggers. The title track “Real Love” has a wonderfully fun call and response with the backing vocals. Following “Real Love” is the longest song on the album with “Night After Night”, at a whopping 4:27. A full horn arrangement fills the atmosphere with luscious sound on what could be called his “pop” song of the album. A little bit of scat kicks off “Everybody Knows” and makes it a fun sing along, as well as “Stupid”, that has cleverly stupid lyrics.

A brave creative step to create an a capella song is taken with “Dreaming.” This short little ditty about what it’s like growing up, and thinking about what things will be like in the future, tugs at the heart strings. “Isn’t dreaming the reason/that living is worthwhile…”

Another thing this generation is big on is nostalgia. Usually it’s for the ’90s and dumb shit like tamagochi. David Myles’ “Real Love” makes us all nostalgic for bygone years that most of us have never lived through, but can absolutely feel while experiencing this record.

Keep an eye out for David on the road, and pick up Real Love when it hits stores on September 15th!