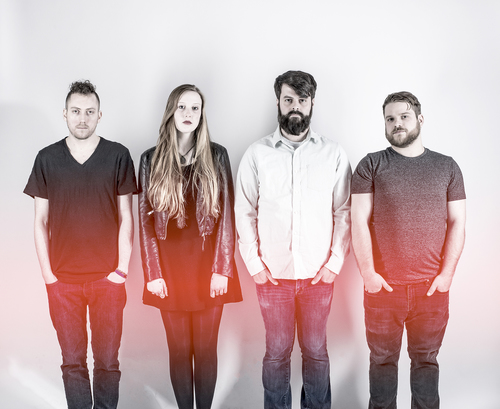 Picture this: Floodland’s debut album Static Walls (listen to it here!) just dropped. Everyone buys it, everyone loves it, everyone wants to hear it live. They head out on their world tour from Afghanistan to Zimbabwe, and everywhere else in between. This is when tragedy strikes. Their plane goes down somewhere over the Atlantic, and the 4 seats they’re sitting in fly in different directions. Four parachutes happen to be on board, since this is obviously a private jet, and they all float down to four separate islands. Luckily, they all have their trusty walkman and five albums each. Unfortunately they’re too far away to share with each other, and cannot train their new pet sharks to ship them back and forth. If this was to happen today, these are the albums the Floods would want to have on board.

“This album was a turning point for me as a teenager. I used to listen to it over and over again focusing on each instrument individually. It’s one of the biggest reasons I write music.”-E

“The best rock band of all time. Who can pick just one album…so I picked the one with the most songs.”-E

“This album was my first introduction to her music. She’s raw, aggressive, emotional, and a huge inspiration to me.”-E

“Motion Picture Soundtrack puts this album at the top for me.”-E

“Even a lifetime on a desert island couldn’t reveal all the secrets this tomb holds.”-L

“Solid record throughout both discs, some of the best RA both musically and lyrically, with lots of emotional highs and lows.”-L

My Name Is My Name-Pusha T

“Lots of great beats, raw aggression and emotion throughout the tracks plus some great features make this a well-rounded hip hop album. Never tire of listening to this.”-L

“Their second album. Some cool noisey rock, much heavier than anything they’ve done since, plus the right amount of fun rock that doesn’t take itself too seriously. Highlight track, Seemed Like A Good Idea At The Time, lyrically is a response to Sympathy For The Devil by the Stones. Fun tune.”-L

“Still so many details to discover on this one no matter how many times I listen to it. So many great songs in so many different styles. Which is what I love about the Beatles. All over the map, trying everything available to them. If I was stuck on a island, I’m pretty sure Revolution No 9 would come in handy somehow.”-A

“Not only is there a great story behind this record, of art winning out over corporations, but every song on this album is perfect and it fits together and flows so naturally. Tweedy has had a lot of great lyrical album, but this one hit home with me the most.”-A

“Like the Beatles, I could pick almost any Radiohead record. I like this one because, again like the Beatles, the styles sprawl all across the map. I feel like this is the pinnacle of where they settled into all the experimentation they were doing on the previous records, and were able to use it fluently in songwriting and recording.”-A

“My introduction to my favourite rapper. Saw him play a lot of this record live, and though I love all the albums since, I still go back to this one on a regular basis.”-A

“My favourite of hers so far. All the songs are catchy.”-T

“Been listening to this album my whole life. It influences all the music I listen to now.”-T

(Bonus-See if Tori’s picks have changed since she was on The Basement Tapes Podcast last time with CAMERON.)

So there you have it. We’ve delved into the minds of Floodland, and we see where their new album Static Walls comes from.

Day 1, the exclusive stream, can be found over HERE.